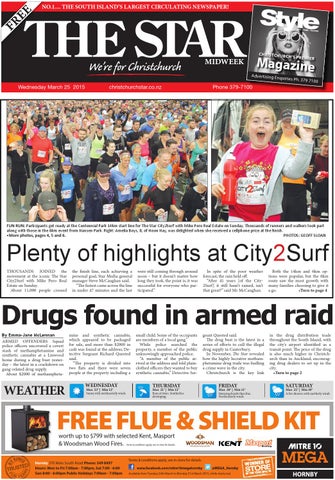 FUN RUN: Participants get ready at the Centennial Park 14km start line for The Star City2Surf with Mike Pero Real Estate on Sunday. Thousands of runners and walkers took part along with those in the 6km event from Hansen Park. Right: Amelia Boys, 8, of Hoon Hay, was delighted when she received a cellphone prize at the finish. •More photos, pages 4, 5 and 6. PHOTOS: GEOFF SLOAN

Plenty of highlights at City2Surf THOUSANDS JOINED the movement at the iconic The Star City2Surf with Mike Pero Real Estate on Sunday. About 11,000 people crossed

the finish line, each achieving a personal goal, Star Media general manager Steve McCaughan said. “The fastest came across the line in under 47 minutes and the last

were still coming through around noon – but it doesn’t matter how long they took, the point is, it was successful for everyone who participated.”

In spite of the poor weather forecast, the rain held off. “After 41 years [of the City2Surf] it still hasn’t rained, isn’t that great?” said Mr McCaughan.

Both the 14km and 6km options were popular, but the 6km route saw the most growth with many families choosing to give it a go. •Turn to page 4

Drugs found in armed raid By Emma-Jane McLennan ARMED OFFENDERS Squad police officers uncovered a covert stash of methamphetamine and synthetic cannabis at a Linwood home during a drug bust yesterday – the latest in a crackdown on gang-related drug supply. About $2000 of methampheta-

mine and synthetic cannabis, which appeared to be packaged for sale, and more than $2000 in cash was found at the address, Detective Sergeant Richard Quested said. “The property is divided into two flats and there were seven people at the property including a

small child. Some of the occupants are members of a local gang.” While police searched the property, a member of the public unknowingly approached police. “A member of the public arrived at the address and told plainclothed officers they wanted to buy synthetic cannabis,” Detective Ser-

geant Quested said. The drug bust is the latest in a series of efforts to cull the illegal drug supply in Canterbury. In November, The Star revealed how the highly lucrative methamphetamine drug trade was fuelling a crime wave in the city. Christchurch is the key link

in the drug distribution trade throughout the South Island, with the city’s airport identified as a transit point. The price of the drug is also much higher in Christchurch than in Auckland, encouraging drug dealers to set up in the city. •Turn to page 2

A few showers with northerly winds