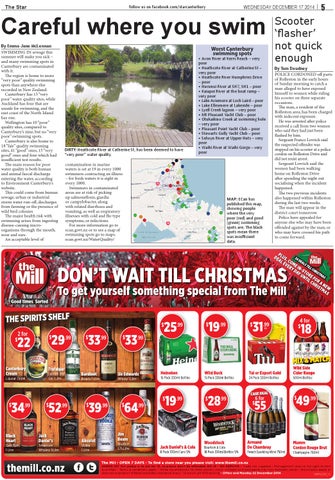 Careful where you swim By Emma-Jane McLennan

SWIMMING IN sewage this summer will make you sick – and many swimming spots in Canterbury are contaminated with it. The region is home to more “very poor” quality swimming spots than anywhere else recorded in New Zealand. Canterbury has 15 “very poor” water quality sites, while Auckland has four that are unsafe for swimming, and the east coast of the North Island has one. Wellington has 10 “poor” quality sites, compared to Canterbury’s nine, but no “very poor” swimming spots. Canterbury is also home to 18 “fair” quality swimming sites, 41 “good” ones, 15 “very good” ones and four which had insufficient test results. The main reason for poor water quality is both human and animal faecal discharge entering the water, according to Environment Canterbury’s website. This could come from human sewage, urban or industrial storm water run-off, discharges from farming or the presence of wild bird colonies The major health risk with swimming arises from ingesting disease-causing microorganisms through the mouth, nose and ears. An acceptable level of

DIRTY: Heathcote River at Catherine St, has been deemed to have “very poor” water quality. contamination in marine waters is set at 19 in every 1000 swimmers contracting an illness – for fresh waters it is eight in every 1000. Swimmers in contaminated areas are at risk of picking up salmonellosis, giardia or campylobacter, along with related diarrhoea and vomiting, as well as respiratory illnesses with cold and flu-type symptoms, or infections. For more information go to ecan.govt.nz or to see a map of swimming spots go to maps. ecan.govt.nz/WaterQuality/

POLICE CORDONED off parts of Rolleston in the early hours of Sunday morning to catch a man alleged to have exposed himself to women while riding his scooter on three separate occasions. The man, a resident of the Rolleston area, has been charged with indecent exposure. He was arrested after police received a call from two women who said they had just been flashed by him. Sergeant Franco Lovrich said the suspected offender was stopped on his scooter at a police cordon on Rolleston Drive and did not resist arrest. Sergeant Lovrich said the women had been walking home on Rolleston Drive after spending the night out socialising when the incident happened. The two previous incidents also happened within Rolleston MAP: ECan has during the last two weeks. published this map, The man will appear in the showing people district court tomorrow. where the very Police have appealed for poor (red) and good anyone else who may have been (green) swimming offended against by the man, or spots are. The black spots mean there who may have crossed his path was insufficient to come forward. data.​