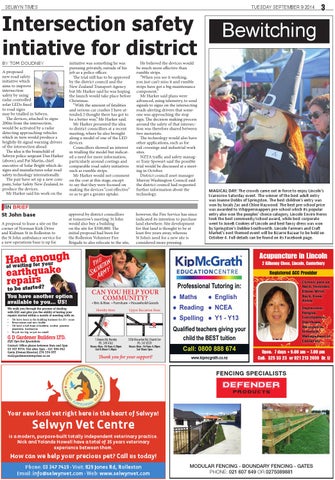 Intersection safety intiative for district BY TOM DOUDNEY A proposed new road safety initiative which aims to improve intersection safety by using radar controlled solar LEDs fixed to road signs may be trialled in Selwyn. The devices, attached to signs 200m from the intersection, would be activated by a radar detecting approaching vehicles which in turn would produce a brightly-lit signal warning drivers of the intersection ahead. The idea is the brainchild of Selwyn police sergeant Dan Harker (above), and Pat Martin, chief executive of Solar Bright which designs and manufactures solar road safety technology internationally. The pair have set up a new company, Solar Safety New Zealand, to produce the devices. Mr Harker said his work on the

initiative was something he was pursuing privately, outside of his job as a police officer. The trial still has to be approved by the district council and the New Zealand Transport Agency but Mr Harker said he was hoping the launch would take place before Christmas. “With the amount of fatalities and serious car crashes I have attended, I thought there has got to be a better way,” Mr Harker said. Mr Harker presented the idea to district councillors at a recent meeting, where he also brought along a model of one of the LED devices. Councillors showed an interest in trialling the model but indicated a need for more information, particularly around costings and comparable road safety initiatives such as rumble strips. Mr Harker would not comment on the cost at this stage, except to say that they were focused on making the devices “cost effective” so as to get a greater uptake.

He believed the devices would be much more effective than rumble strips. “When you see it working, you just can’t miss it and rumble strips have got a big maintenance component.” Mr Harker said plans were advanced, using telemetry, to send signals to signs on the intersecting roads alerting drivers that someone was approaching the stop sign. The decision making process around the safety of that intersection was therefore shared between two motorists. The technology would also have other applications, such as for rail crossings and industrial work sites. NZTA traffic and safety manager Tony Spowart said the possible trial would be discussed at a meeting in October. District council asset manager Murray Washington Council said the district council had requested further information about the technology.

approval by district councillors at tomorrow’s meeting. St John would also buy a building on the site for $500,000. The initial proposal had been for the Rolleston Volunteer Fire Brigade to also relocate to the site,

however, the Fire Service has since indicated its intention to purchase land elsewhere. Site development for that land is thought to be at least five years away, whereas St John’s need for a new site is considered more pressing.

We have been in the building business for 20+ years Renovations and new builds We have a full team of builders, roofers, painters, plasterers, bricklayers No job too big, no job too small

MAGICAL DAY: The crowds came out in force to enjoy Lincoln’s Scarecrow Saturday event. The winner of the best adult entry was Joanne Dobbs of Springston. The best children’s entry was won by locals Zac and Chloe Haywood. The best pre-school prize was awarded to Whippersnappers pre-school which its popular entry also won the peoples’ choice category. Lincoln Enviro Heros took the best community/school award, while best corporate went to JuneB Cookies of Lincoln and best fancy dress was won by Springston’s Debbie Southworth. Lincoln Farmers and Craft Market’s next themed event will be Bizarre Bazaar to be held on October 4. Full details can be found on its Facebook page.

We walk you through the process of dealing with EQC and give you the ability of having your repairs started within a month of meeting with us.

to be star You have another option available to you... US!

Your new local vet right here in the heart of Selwyn!

Selwyn Vet Centre is a modern, purpose-built totally independent veterinary practice. Nick and Yolande Howell have a total of 35 years veterinary experience between them.