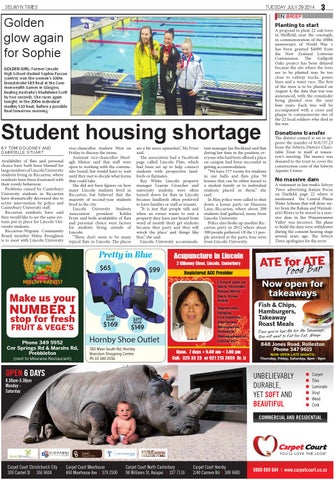 A proposal to plant 22 oak trees in Sheffield, near the cenotaph, in commemoration of the 100th anniversary of World War 1 has been granted $4600 from the New Zealand Lotteries Commission. The Gallipoli Oaks project has been delayed because the site where the trees are to be planted may be too close to railway tracks, power lines and a water race. The first of the trees is to be planted on August 4, the date that war was announced, with the remainder being planted over the next four years. Each tree will be accompanied with a cross and plaque to commemorate one of the 22 local soldiers who died in the war.

vice-chancellor Andrew West on Friday to discuss the issues. Assistant vice-chancellor Sheelagh Matear said that staff were open to working with the community board, but would have to wait until they met to decide what forms that could take. She did not have figures on how many Lincoln students lived in Riccarton, but believed that the majority of second-year students lived in the city. Lincoln University Students Association president Kahlia Fryer said both availability of flats and personal choice were factors for students living outside of Lincoln. “There don’t seem to be many typical flats in Lincoln. The places

are a bit more upmarket,” Ms Fryer said. The association had a Facebook page called Lincoln Flats, which had been set up to help connect students with prospective landlords or flatmates. Ray White Lincoln property manager Leanne Croucher said university students were often turned down for flats in Lincoln because landlords often preferred to have families or staff as tenants. “It is just that people talk and when an owner wants to rent a property they have just heard from word of mouth ‘don’t get students because they party and they will wreck the place’ and things like that,” she said. Lincoln University accommoda-

tion manager Jan Buckland said that during her time in the position, everyone who had been offered a place on campus had been successful in getting accommodation. “We have 577 rooms for students in our halls and flats plus 50 houses that can be either leased to a student family or to individual students placed in them,” she said. In May, police were called to shut down a house party on Hansons Lane, Riccarton, where about 200 students had gathered, many from Lincoln University. Police also broke up another Riccarton party in 2012 where about 300 people gathered. Of the 11 people arrested at the party, four were from Lincoln University.

The district council is set to approve the transfer of $10,737.23 from the Selwyn District Charitable Trust to itself at tomorrow’s meeting. The money was donated to the trust to cover the construction costs of the Selwyn Aquatic Centre.

A statement in last week’s Selwyn Times advertising feature Focus on Darfield, page 22 where it mentioned ‘the Central Plains Water Scheme that will draw water from the Rakaia and Waimakariri Rivers to be stored in a massive dam in the Waianiwaniwi Valley’ was incorrect. The plans to build the dam were withdrawn during the consent hearing stage several years ago. The Selwyn Times apologises for the error.

E ATE for AT Bar

UNBELIEVABLY DURABLE, YET SOFT AND BEAUTIFUL

transf orm yo ur home FROM jus with carpet t