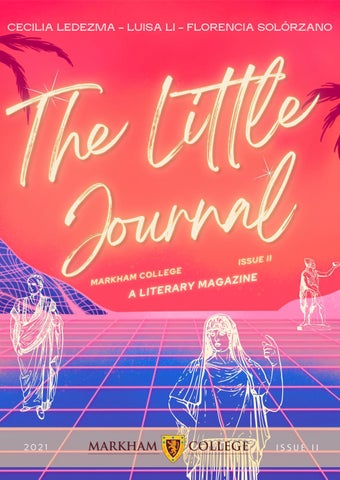 Welcome to the second edition of Markham College&#39;s literary magazine, The LITtle Journal! We are overjoyed with the response to our first edition. Before we continue, we want to take a moment to thank everyone who helped it become a reality, either behind the scenes or by submitting their work. As for important announcements, we would like to note that we (Florencia, Luisa, and Cecilia) have graduated from IB this month and therefore will not be returning next year. However, we are passing down the magazine to other interested writers like ourselves, so it will go on regardless. We are very thankful to what it has become in the time we spent with it. It&#39;s been a pleasure; Write on! - The LITtle Journal Founding Team 2

Olivia hated packing just as much as she hated the Chicago subway in blazing hot summers. The mess and clothes thrown around everywhere, the overpowering scent of lavender detergent clouding her thoughts and making it almost impossible to breathe. See, packing could mean one of many things Olivia, alias ‘Liv,’ had learnt to identify over the years. When someone packs up their belongings, it means a) A holiday, b) Leaving, and finally, c) Moving. Which led to why she found herself sitting on the wornout cherry wood floor at 2 in the morning when she was supposed to be moving out of her apartment at 7. Liv could hear the creaking of doors a couple doors from hers. The train passing by 10 floors below what her cold feet could reach. She was sure she’d burnt the coat about 10 months ago. She was certain of it, but she must have dreamt it. Because there she was, staring at the coat. Maybe looking at it would make it disappear if she just stared at it long enough. She liked to blame her parents for her disdain towards the concept of marriage. Because, God, it’s such a strange concept. It is the last legal form of slavery existent and acceptable within society, after all. Thomas Bennett, alias Tommy, met Olivia Ridgmoor, alias Liv, in the midst of her doodling in her math notebook. She liked drawing hearts on the footnotes of the ‘Year 9 Algebra’ section. They kept her away from her thoughts, and away from logic and math and all those taunting horrors her intelligence would one day be measured in the day she’d have to begin with college applications; because, God, what if her GPA wasn’t high enough or she didn’t get enough credits to graduate or what if she does graduate but without a GPA high enough to get the hell out of this god-awful town, the world was supposed to end in 2012 according to the Mayans so what if“Hi. I’m Tommy. Tommy Bennett.” A tall, messy-haired tangle of limbs said with a warm smile and faint recognition splattered across his face. “We actually went to elementary school together. Jonathan Burr Elementary? I used to have thick glasses and I always took your red

crayons, and I denied it but I’m sure deep down you knew-” He was babbling at this point, looking like the words shooting out of his mouth before he could even acknowledge them. He looked down and shook his head coyly. “Not really the point, just. Is-is this seat taken?” Liv grinned back into her chair and glanced briefly at the warm Chicago autumn before turning back to look up at him. He still had pretty eyes. “Not at all, go ahead”. When Liv set down her keys on the very same table she currently found herself struggling to pack up 10 months ago, she felt the weight of a thousand stones pulling her down beyond what her aimless sack of skin could aim to describe. Because, truly, it’s funny how there’s so many words to encapsulate the most minuscule, ridiculous feelings, yet so little words to describe the overwhelming sensation of burn within her bloodstream. Some throw stones. Some make diamond rings with them. The type that froze Liv to her very core. The day she went to give him back his things was the worst. “I’m sorry I couldn’t be who you wanted me to be” Liv whispered, tears on the rim of her eyes as she shot the most convincing smile she could muster with the single drops of energy she had left within her body. She felt like a desert; Not even a single rolling bush in sight. “It’s alright, Liv. You don’t have to say anything.” The night of the fight, Tommy told her he hadn’t heard her say ‘I didn’t know what to say’ in their almost ten years together. It was unspoken, but as she sobbed in Tommy’s arms for what she was sure was gonna be the last time, they both agreed this classified as a second. He shot her a bittersweet smile as she lingered on the door. “Goodbye, Liv” Liv stayed in place for a beat, staring at the tall windows his new apartment had. “Goodbye, Tommy.” When she finished packing, it was nearing 6:35. Liv packed old pictures and old gifts but somehow couldn’t manage to fit the pieces of herself she’d leave behind once she stepped foot out of her Melrose Street apartment. She left the coat in a Goodwill donation bin. And as she called a cab, she realized New York was, in a way, what Chicago always wanted to be.

People are walking hurriedly along the sodden streets of London. It’s wintertime, and a biting breeze shocks the mass of commuting people. A benevolent, sombre sky shadows the cramped passageways that hold the weariness of bystanders rushing past each other. With the bare light of dawn, shops and locals have just begun turning around their door signs to welcome the commuting people into their gloomy havens. Midst the crowd of commuters, behind the panel glass of her shop, an aged woman strolls to the entrance of her bakery. She struggles to reach the doorway and rests against the entrance’s wall, leaning gently towards the door. No one notices her. She gazes to the outside world in detachment (would she long to go out there?). Her face holds the wrinkles of her life as if they were a constant memory marked into her permanently. Her hands are creased, yet they are covered in powdery white labour. The woman flips the sign; “Open”. She strides back where she came from and disappears within the crowds. Droplets of rain then start falling on the tops of the main streets that become congested with umbrellas. People walk at a monotone pace, avoiding bumping into one another. The air is tense with soundless misery coming from below the dark mass of umbrellas that hide the faces beneath. These pedestrians are somewhat buried under their own unhappiness, lacking interest in the rain that wets their darkened coats. Dressed in dreary colours, they continue their course, yet the rain falls. Feeble post lights then begin to fill the unlit gaps between the crowd. Faces are vaguely seen as they are covered with the hoods of their coats, revealing angles and bare shadows of their identities. Everyone seems to refuse the overwhelming feeling that has been lately hovering inside them. They rush to their unlikeable destinations in worry that they lose track of time. After all, commuting does seem to take up a lifetime.

Cabs, wandering since the early hours of the morning hoping to catch a few desperate pedestrians, are in an inevitable rush to earn enough for the day. They become obstructed with one another in traffic, but really, no driver seems to care. Inside them, there is no music, no radio. Just silence. Time still goes by even when there is no purpose to fulfil (what would be their purpose in the first place?). The faded coloured doors and the shattered headlights are now part of the scenery. It is as if, since everyone has gotten used to them, they are now background props, with no purpose whatsoever in the main story. From a distance, it looks simply like an ocean of people. Closer, just below the mare level, then, only then, I notice her. She strides the streets in an incomprehensible rush, making her way through the crowds of gloom. The streets seem to be wearing black while she wears all the shades she can. Her boots are up to her knees, shining as bright as the sun that ever seems to avoid the sky. In contrast to all, they are flashing yellow, illuminating the slippery sombre grounds and bringing sunshine to where light does not reach. She trips over plain water, and she accelerates her pace in order to evade falling. A fluorescent red coat covers most of her body, but her hair is as wet as her umbrella, which rests by her side in one hand. Short, blonde and damp, her hairs tangle and form knots, which she doesn’t seem to notice. Trotting within crowds of strangers, celebrating the rain with emotion, she is as happy as ever. As if she were in a different narrative, the woman detaches herself from the crowds of people and becomes her own. She paces across the final junction. I follow her in crude curiosity. Leaves fall from the trees carpeting the streets below. She skips the steps that guide her to a lower platform, pacing towards the railings that are coated with droplets. With a sigh, she accommodates herself on the solitary bench beneath the branches which hide the rain vaguely. I come closer to view her at a shorter distance, leaning against the glassy railing. She gazes towards the river, so I do too. The park beside River Thames is silent, except for her loud presence. I lose sight of her for a few seconds. I turn around and she is gone. The tree hovers over an empty chair, where she sat quietly, not minding my presence at all. She is vague, unnoticeable, ghostlike - completely different than before. On the park beside River Thames, there are two wondrous souls. One of them is lonely. The other is dreaming.

Welcome to the second edition of Markham College's literary magazine, The LITtle Journal. This is a bimestral magazine that showcases students' written work (short stories, poems, and essays) in Spanish, English, and French. 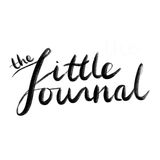