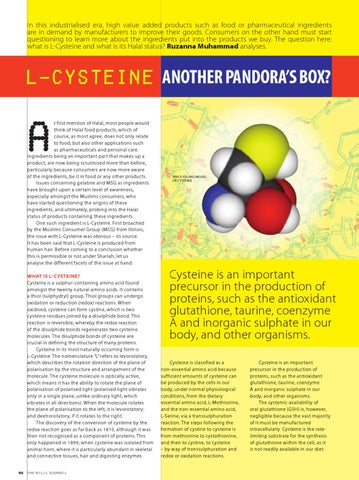 In this industrialised era, high value added products such as food or pharmaceutical ingredients are in demand by manufacturers to improve their goods. Consumers on the other hand must start questioning to learn more about the ingredients put into the products we buy. The question here: what is L-Cysteine and what is its Halal status? Ruzanna Muhammad analyses.

t first mention of Halal, most people would think of Halal food products, which of course, as most agree, does not only relate to food, but also other applications such as pharmaceuticals and personal care. Ingredients being an important part that makes up a product, are now being scrutinised more than before, particularly because consumers are now more aware of the ingredients, be it in food or any other products. Issues concerning gelatine and MSG as ingredients have brought upon a certain level of awareness, especially amongst the Muslims consumers, who have started questioning the origins of these ingredients, and ultimately, probing into the Halal status of products containing these ingredients. One such ingredient is L-Cysteine. First broached by the Muslims Consumer Group (MCG) from Illinois, the issue with L-Cysteine was obvious – its source. It has been said that L-Cysteine is produced from human hair. Before coming to a conclusion whether this is permissible or not under Shariah, let us analyse the different facets of the issue at hand. WHAT IS L-CYSTEINE? Cysteine is a sulphur-containing amino acid found amongst the twenty natural amino acids. It contains a thiol (sulphydryl) group. Thiol groups can undergo oxidation or reduction (redox) reactions. When oxidised, cysteine can form cystine, which is two cysteine residues joined by a disulphide bond. This reaction is reversible, whereby the redox reaction of the disulphide bonds regenerates two cysteine molecules. The disulphide bonds of cysteine are crucial in defining the structure of many proteins. Cysteine in its most naturally occurring form is L-Cysteine. The nomenclature “L” refers to levorotatory, which describes the rotation direction of the plane of polarisation by the structure and arrangement of the molecule. The cysteine molecule is optically active, which means it has the ability to rotate the plane of polarisation of polarised light (polarised light vibrates only in a single plane, unlike ordinary light, which vibrates in all directions). When the molecule rotates the plane of polarisation to the left, it is levorotatory; and dextrorotatory, if it rotates to the right. The discovery of the conversion of cysteine by the redox reaction goes as far back as 1810, although it was then not recognised as a component of proteins. This only happened in 1899, when cysteine was isolated from animal horn, where it is particularly abundant in skeletal and connective tissues, hair and digesting enzymes.

Cysteine is an important precursor in the production of proteins, such as the antioxidant glutathione, taurine, coenzyme A and inorganic sulphate in our body, and other organisms. Cysteine is classified as a non-essential amino acid because sufficient amounts of cysteine can be produced by the cells in our body, under normal physiological conditions, from the dietary essential amino acid, L-Methionine, and the non-essential amino acid, L-Serine, via a transsulphuration reaction. The steps following the formation of cystine to cysteine is from methionine to cystathionine, and then to cystine, to cysteine – by way of transsulphuration and redox or oxidation reactions.

Cysteine is an important precursor in the production of proteins, such as the antioxidant glutathione, taurine, coenzyme A and inorganic sulphate in our body, and other organisms. The systemic availability of oral glutathione (GSH) is, however, negligible because the vast majority of it must be manufactured intracellularly. Cysteine is the ratelimiting substrate for the synthesis of glutathione within the cell, as it is not readily available in our diet. 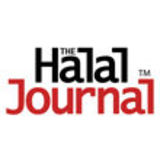