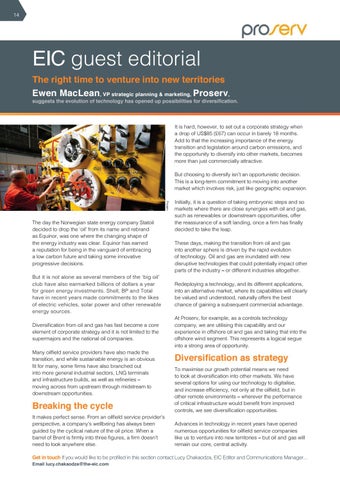 suggests the evolution of technology has opened up possibilities for diversification.

It is hard, however, to set out a corporate strategy when a drop of US$85 (£67) can occur in barely 18 months. Add to that the increasing importance of the energy transition and legislation around carbon emissions, and the opportunity to diversify into other markets, becomes more than just commercially attractive. But choosing to diversify isn’t an opportunistic decision. This is a long-term commitment to moving into another market which involves risk, just like geographic expansion. Proserv

The day the Norwegian state energy company Statoil decided to drop the ‘oil’ from its name and rebrand as Equinor, was one where the changing shape of the energy industry was clear. Equinor has earned a reputation for being in the vanguard of embracing a low carbon future and taking some innovative progressive decisions. But it is not alone as several members of the ‘big oil’ club have also earmarked billions of dollars a year for green energy investments. Shell, BP and Total have in recent years made commitments to the likes of electric vehicles, solar power and other renewable energy sources. Diversification from oil and gas has fast become a core element of corporate strategy and it is not limited to the supermajors and the national oil companies. Many oilfield service providers have also made the transition, and while sustainable energy is an obvious fit for many, some firms have also branched out into more general industrial sectors, LNG terminals and infrastructure builds, as well as refineries – moving across from upstream through midstream to downstream opportunities.

It makes perfect sense. From an oilfield service provider’s perspective, a company’s wellbeing has always been guided by the cyclical nature of the oil price. When a barrel of Brent is firmly into three figures, a firm doesn’t need to look anywhere else.

Initially, it is a question of taking embryonic steps and so markets where there are close synergies with oil and gas, such as renewables or downstream opportunities, offer the reassurance of a soft landing, once a firm has finally decided to take the leap. These days, making the transition from oil and gas into another sphere is driven by the rapid evolution of technology. Oil and gas are inundated with new disruptive technologies that could potentially impact other parts of the industry – or different industries altogether. Redeploying a technology, and its different applications, into an alternative market, where its capabilities will clearly be valued and understood, naturally offers the best chance of gaining a subsequent commercial advantage. At Proserv, for example, as a controls technology company, we are utilising this capability and our experience in offshore oil and gas and taking that into the offshore wind segment. This represents a logical segue into a strong area of opportunity.

To maximise our growth potential means we need to look at diversification into other markets. We have several options for using our technology to digitalise, and increase efficiency, not only at the oilfield, but in other remote environments – wherever the performance of critical infrastructure would benefit from improved controls, we see diversification opportunities. Advances in technology in recent years have opened numerous opportunities for oilfield service companies like us to venture into new territories – but oil and gas will remain our core, central activity.

you would to be profiled in this section contact Lucy Chakaodza, EIC Editor and Communications Manager... Get in in touch touchIfShare your like news and views... Email newsdesk@the-eic.com lucy.chakaodza@the-eic.com • Phone +44 (0)20 7091 8600 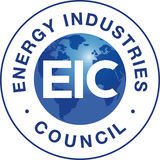