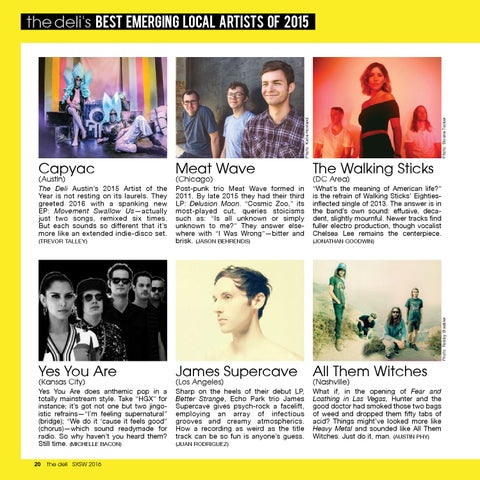 The Deli Austin’s 2015 Artist of the Year is not resting on its laurels. They greeted 2016 with a spanking new EP: Movement Swallow Us—actually just two songs, remixed six times. But each sounds so different that it’s more like an extended indie-disco set. (Trevor Talley)

Post-punk trio Meat Wave formed in 2011. By late 2015 they had their third LP: Delusion Moon. “Cosmic Zoo,” its most-played cut, queries stoicisms such as: “Is all unknown or simply unknown to me?” They answer elsewhere with “I Was Wrong”—bitter and brisk. (Jason Behrends)

“What’s the meaning of American life?” is the refrain of Walking Sticks’ Eightiesinflected single of 2013. The answer is in the band’s own sound: effusive, decadent, slightly mournful. Newer tracks find fuller electro production, though vocalist Chelsea Lee remains the centerpiece.

Yes You Are does anthemic pop in a totally mainstream style. Take “HGX” for instance; it’s got not one but two jingoistic refrains—“I’m feeling supernatural” (bridge); “We do it ‘cause it feels good” (chorus)—which sound readymade for radio. So why haven’t you heard them? Still time. (Michelle Bacon)

Sharp on the heels of their debut LP, Better Strange, Echo Park trio James Supercave gives psych-rock a facelift, employing an array of infectious grooves and creamy atmospherics. How a recording as weird as the title track can be so fun is anyone’s guess.

What if, in the opening of Fear and Loathing in Las Vegas, Hunter and the good doctor had smoked those two bags of weed and dropped them fifty tabs of acid? Things might’ve looked more like Heavy Metal and sounded like All Them Witches. Just do it, man. (Austin Phy)