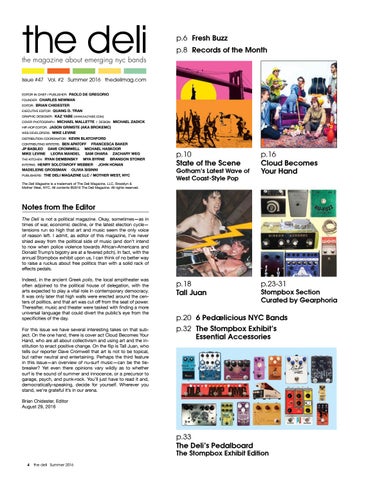 Notes from the Editor The Deli is not a political magazine. Okay, sometimes—as in times of war, economic decline, or the latest election cycle— tensions run so high that art and music seem the only voice of reason left. I admit, as editor of this magazine, I’ve never shied away from the political side of music (and don’t intend to now when police violence towards African-Americans and Donald Trump’s bigotry are at a fevered pitch). In fact, with the annual Stompbox exhibit upon us, I can think of no better way to raise a ruckus about free politics than with a solid rack of effects pedals. Indeed, in the ancient Greek polis, the local ampitheater was often adjoined to the political house of delegation, with the arts expected to play a vital role in contemporary democracy. It was only later that high walls were erected around the centers of politics, and that art was cut off from the seat of power. Thereafter, music and theater were tasked with finding a more universal language that could divert the public’s eye from the specificities of the day. For this issue we have several interesting takes on that subject. On the one hand, there is cover act Cloud Becomes Your Hand, who are all about collectivism and using art and the institution to enact positive change. On the flip is Tall Juan, who tells our reporter Dave Cromwell that art is not to be topical, but rather neutral and entertaining. Perhaps the third feature in this issue—an overview of nu-surf music—can be the tiebreaker? Yet even there opinions vary wildly as to whether surf is the sound of summer and innocence, or a precursor to garage, psych, and punk-rock. You’ll just have to read it and, democratically-speaking, decide for yourself. Wherever you stand, we’re grateful it’s in our arena.

The Stompbox Exhibit special issue, with Cloud Becomes Your Hand on the cover. Plus: a new partnership with Gearphoria, bringing in-depth co...

The Stompbox Exhibit special issue, with Cloud Becomes Your Hand on the cover. Plus: a new partnership with Gearphoria, bringing in-depth co...