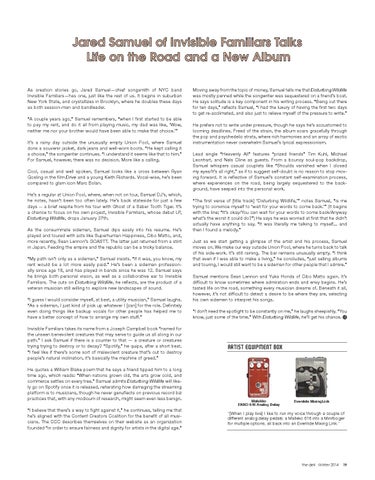 As creation stories go, Jared Samuel—chief songsmith of NYC band Invisible Familiars—has one, just like the rest of us. It begins in suburban New York State, and crystallizes in Brooklyn, where he doubles these days as both session-man and bandleader. “A couple years ago,” Samuel remembers, “when I first started to be able to pay my rent, and do it all from playing music, my dad was like, ‘Wow, neither me nor your brother would have been able to make that choice.’” It’s a rainy day outside the unusually empty Union Pool, where Samuel dons a souvenir jacket, dark jeans and well-worn boots. “He kept calling it a choice,” the songwriter continues. “I understand it seems like that to him.” For Samuel, however, there was no decision. More like a calling. Cool, casual and well spoken, Samuel looks like a cross between Ryan Gosling in the film Drive and a young Keith Richards. Vocal-wise, he’s been compared to glam icon Marc Bolan. He’s a regular at Union Pool, where, when not on tour, Samuel DJ’s, which, he notes, hasn’t been too often lately. He’s back stateside for just a few days -- a brief respite from his tour with Ghost of a Saber Tooth Tiger. It’s a chance to focus on his own project, Invisible Familiars, whose debut LP, Disturbing Wildlife, drops January 27th. As the consummate sideman, Samuel dips easily into his resume. He’s played and toured with acts like Superhuman Happiness, Cibo Matto, and, more recently, Sean Lennon’s GOASTT. The latter just returned from a stint in Japan. Feeding the empire and the republic can be a tricky balance. “My path isn’t only as a sideman,” Samuel insists. “If it was, you know, my rent would be a lot more easily paid.” He’s been a sideman professionally since age 18, and has played in bands since he was 12. Samuel says he brings both personal vision, as well as a collaborative ear to Invisible Familiars. The cuts on Disturbing Wildlife, he reflects, are the product of a veteran musician still willing to explore new landscapes of sound. “I guess I would consider myself, at best, a utility musician,” Samuel laughs. “As a sideman, I just kind of pick up whatever I [can] for the role. Definitely even doing things like backup vocals for other people has helped me to have a better concept of how to arrange my own stuff.” Invisible Familiars takes its name from a Joseph Campbell book “named for the unseen benevolent creatures that may serve to guide us all along in our path.” I ask Samuel if there is a counter to that — a creature or creatures trying trying to destroy or to decay? “Spotify,” he quips, after a short beat. “I feel like if there’s some sort of malevolent creature that’s out to destroy people’s natural inclination, it’s basically the machine of greed.” He quotes a William Blake poem that he says a friend tipped him to a long time ago, which reads: “When nations grown old, the arts grow cold, and commerce settles on every tree.” Samuel admits Disturbing Wildlife will likely go on Spotify once it is released, reiterating how damaging the streaming platform is to musicians, though he never genuflects on previous record biz practices that, with any modicum of research, might seem even less benign. “I believe that there’s a way to fight against it,” he continues, telling me that he’s aligned with the Content Creators Coalition for the benefit of all musicians. The CCC describes themselves on their website as an organization founded “in order to ensure fairness and dignity for artists in the digital age.”

Moving away from the topic of money, Samuel tells me that Disturbing Wildlife was mostly penned while the songwriter was sequestered on a friend’s boat. He says solitude is a key component in his writing process. “Being out there for ten days,” reflects Samuel, “I had the luxury of having the first two days to get re-acclimated, and also just to relieve myself of the pressure to write.” He prefers not to write under pressure, though he says he’s accustomed to looming deadlines. Freed of the strain, the album soars gracefully through the pop and psychedelic strata, where rich harmonies and an array of exotic instrumentation never overwhelm Samuel’s lyrical expressionism. Lead single “Heavenly All” features “prized friends” Tim Kuhl, Michael Leonhart, and Nels Cline as guests. From a bouncy soul-pop backdrop, Samuel whispers casual couplets like “Shoulda vanished when I closed my eyes/It’s all right,” as if to suggest self-doubt is no reason to stop moving forward. It is reflective of Samuel’s constant self-examination process, where experiences on the road, being largely sequestered to the background, have seeped into the personal work. “The first verse of [title track] ‘Disturbing Wildlife,’” notes Samuel, “is me trying to convince myself to ‘wait for your words to come back.’” (It begins with the line: “It’s okay/You can wait for your words to come back/Anyway what’s the worst it could do?”) He says he was worried at first that he didn’t actually have anything to say. “It was literally me talking to myself... and then I found a melody.” Just as we start getting a glimpse of the artist and his process, Samuel moves on. We make our way outside Union Pool, where he turns back to talk of his side-work. It’s still raining. The bar remains unusually empty. “I think that even if I was able to make a living,” he concludes, “just selling albums and touring, I would still want to be a sideman for other people that I admire.” Samuel mentions Sean Lennon and Yuka Honda of Cibo Matto again. It’s difficult to know sometimes where admiration ends and envy begins. He’s tasted life on the road, something every musician dreams of. Beneath it all, however, it’s not difficult to detect a desire to be where they are, selecting his own sidemen to interpret his songs. “I don’t need the spotlight to be constantly on me,” he laughs sheepishly. “You know, just some of the time.” With Disturbing Wildlife, he’ll get his chance. d

“[When I play live] I like to run my voice through a couple of different analog delay pedals: a Malleko 616 into a Minifooger for multiple options, all back into an Eventide Mixing Link.”

Winter 2015. Featuring full coverage of females in techno. (Photo on cover is an homage to Kraftwerk's "Man-Machine" album of 1977, executed by Brooklyn collective the Art Kartel.)