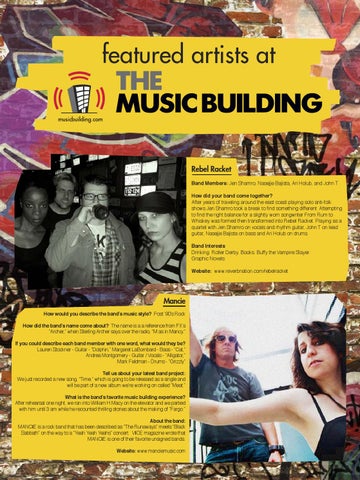 Rebel Racket Band Members: Jen Shamro, Nasejje Bajista, Ari Holub, and John T How did your band come together? After years of traveling around the east coast playing solo anti-folk shows Jen Shamro took a break to find something different. Attempting to find the right balance for a slightly worn songwriter From Rum to Whiskey was formed then transformed into Rebel Racket. Playing as a quartet with Jen Shamro on vocals and rhythm guitar, John T on lead guitar, Nasejje Bajista on bass and Ari Holub on drums. Band Interests Drinking. Roller Derby. Books. Buffy the Vampire Slayer. Graphic Novels. Website: www.reverbnation.com/rebelracket

Mancie How would you describe the band’s music style? Post ‘90’s Rock How did the band’s name come about? The name is a a reference from FX’s “Archer,” when Sterling Archer says over the radio, “M as in Mancy.” If you could describe each band member with one word, what would they be? Lauren Stockner - Guitar - “Dolphin,” Margaret LaBombard - Bass - “Cat,” Andrea Montgomery - Guitar / Vocals - “Alligator,” Mark Feldman - Drums - “Grizzly” Tell us about your latest band project: We just recorded a new song, “Time,” which is going to be released as a single and will be part of a new album we’re working on called “Meat.” What is the band’s favorite music building experience? After rehearsal one night, we ran into William H Macy on the elevator and we partied with him until 3 am while he recounted thrilling stories about the making of “Fargo.” About the band: MANCIE is a rock band that has been described as “The Runaways” meets “Black Sabbath” on the way to a “Yeah Yeah Yeahs” concert. VICE magazine wrote that MANCIE is one of their favorite unsigned bands. Website: www.manciemusic.com