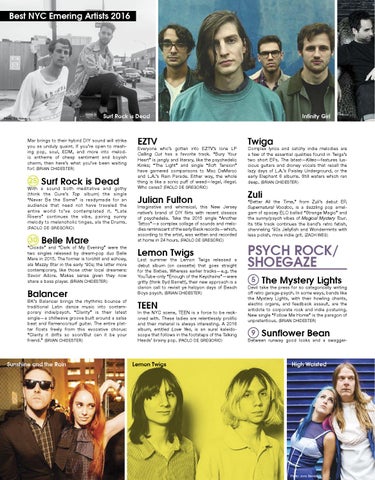 Mar brings to their hybrid DIY sound will strike you as unduly quaint. If you’re open to mashing pop, soul, EDM, and more into melodic anthems of cheap sentiment and boyish charm, then here’s what you’ve been waiting for! (Brian Chidester)

With a sound both meditative and gothy (think the Cure’s Top album) the single “Never Be the Same” is readymade for an audience that need not have traveled the entire world to’ve contemplated it. “Late Risers” continues the vibe, pairing sunny melody to melancholic tinges, ala the Drums. (Paolo De Gregorio)

“Cicada” and “Dark of My Evening” were the two singles released by dream-pop duo Belle Mare in 2015. The former is torchlit and echoey, ala Mazzy Star in the early ‘90s; the latter more contemporary, like those other local dreamers: Savoir Adore. Makes sense given they now share a bass player. (Brian Chidester)

BK’s Balancer brings the rhythmic bounce of traditional Latin dance music into contemporary indie/psych. “Clarity” is their latest single—a chillwave groove built around a salsa beat and flamenco/surf guitar. The entire platter floats freely from this evocative chorus: “Clarity it drifts so soon/But can it be your friend.” (Brian Chidester)

Sunshine and the Rain

Everyone who’s gotten into EZTV’s lone LP Calling Out has a favorite track. “Bury Your Heart” is jangly and literary, like the psychedelic Kinks; “The Light” and single “Soft Tension” have garnered comparisons to Mac DeMarco and L.A.’s Rain Parade. Either way, the whole thing is like a sonic puff of weed—legal, illegal. Who cares? (Paolo De Gregorio)

Imaginative and whimsical, this New Jersey native’s brand of DIY flirts with recent classics of psychedelia. Take the 2015 single “Another Tattoo”—a complex collage of sounds and melodies reminiscent of the early Beck records—which, according to the artist, was written and recorded at home in 24 hours. (Paolo De Gregorio)

Last summer the Lemon Twigs released a debut album (on cassette) that goes straight for the Sixties. Whereas earlier tracks—e.g. the YouTube-only “Enough of the Keychains”—were gritty (think Syd Barrett), their new approach is a clarion call to revisit ye halcyon days of Beach Boys psych. (Brian Chidester)

In the NYC scene, TEEN is a force to be reckoned with. These ladies are relentlessly prolific and their material is always interesting. A 2016 album, entitled Love Yes, is an aural kaleidoscope that follows in the footsteps of the Talking Heads’ brainy pop. (Paolo De Gregorio)

Devil take the press for so categorically writing off retro garage-psych. In some ways, bands like the Mystery Lights, with their howling chants, electric organs, and feedback assault, are the antidote to corporate rock and indie posturing. New single “Follow Me Home” is the paragon of unpretentious. (Brian Chidester)

Between runway good looks and a swagger-