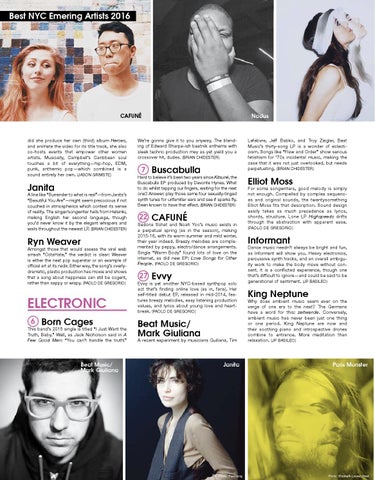 did she produce her own (third) album Heroes, and animate the video for its title track, she also co-hosts events that empower other women artists. Musically, Campbell’s Caribbean soul touches a bit of everything—hip-hop, EDM, punk, anthemic pop—which combined is a sound entirely her own. (Jason Grimste)

A line like “Surrender to what is real”—from Janita’s “Beautiful You Are”—might seem precocious if not couched in atmospherics which contest its sense of reality. The singer/songwriter hails from Helsinki, making English her second language, though you’d never know it by the elegant whispers and wails throughout the newest LP. (Brian Chidester)

Amongst those that would assess the viral web smash “OctaHate,” the verdict is clear: Weaver is either the next pop superstar or an example of official art at its nadir. Either way, the song’s overlydramatic, plastic production has moxie and shows that a song about happiness can still be cogent, rather than sappy or wispy. (Paolo De Gregorio)

This band’s 2015 single is titled “I Just Want the Truth, Baby.” Well, as Jack Nicholson said in A Few Good Men: “You can’t handle the truth!”

We’re gonna give it to you anyway. The blending of Edward Sharpe-ish beatnik anthems with sleek techno production may as yet yield you a crossover hit, dudes. (Brian Chidester)

Hard to believe it’s been two years since Kitsuné, the Buscabulla EP produced by Devonte Hynes. What to do whilst tapping our fingers, waiting for the next one? Answer: play those same four sexually-tinged synth tunes for unfamiliar ears and see if sparks fly. Been known to have that effect. (Brian Chidester)

Sedona Schat and Noah Yoo’s music exists in a perpetual spring (as in the season), making 2015-16, with its warm summer and mild winter, their year indeed. Breezy melodies are complemented by peppy, electro/dance arrangements. Single “Warm Body” found lots of love on the internet, as did new EP: Love Songs for Other People. (Paolo De Gregorio)

Lefebvre, Jeff Babko, and Troy Zeigler, Beat Music’s thirty-song LP is a wonder of eclecticism. Songs like “Flaw and Order” show serious fetishism for ‘70s incidental music, making the case that it was not just overlooked, but needs perpetuating. (Brian Chidester)

Dance music needn’t always be bright and fun, as Informant will show you. Heavy electronics, percussive synth tracks, and an overall ambiguity work to make the body move without consent. It is a conflicted experience, though one that’s difficult to ignore—and could be said to be generational of sentiment. (JP Basileo)

Why does ambient music seem ever on the verge of one era to the next? The Germans have a word for this: zeitwende. Conversely, ambient music has never been just one thing or one period. King Neptune are now and their soothing piano and introspective drones combine to entrance. More meditation than relaxation. (JP Basileo)