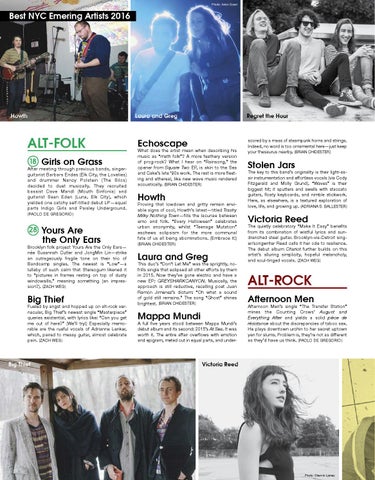 Yours Are the Only Ears

Brooklyn folk project Yours Are the Only Ears— née Susannah Cutler and JongMin Lin—strike an outrageously fragile tone on their trio of Bandcamp singles. The newest is “Low”—a lullaby of such calm that Stereogum likened it to “pictures in frames resting on top of dusty windowsills,” meaning something (an impression?). (Zach Weg)

Fueled by angst and hopped up on alt-rock vernacular, Big Thief’s newest single “Masterpiece” queries existential, with lyrics like: “Can you get me out of here?” (We’ll try!) Especially memorable are the rueful vocals of Adrianne Lenker, which, paired to messy guitar, almost celebrate pain. (Zach Weg)

What does the artist mean when describing his music as “math folk”? A more feathery version of prog-rock? What I hear on “Rainsong,” the opener from Square Two EP, is akin to the Sea and Cake’s late ‘90s work. The rest is more fleeting and ethereal, like new wave music rendered acoustically. (Brian Chidester)

Proving that lowdown and gritty remain enviable signs of cool, Howth’s latest—titled Trashy Milky Nothing Town—fills the lacunae between emo and folk. “Every Halloween” celebrates urban anonymity, whilst “Teenage Mutation” eschews solipsism for the more communal fate of us all being abominations. (Embrace it!) (Brian Chidester)

This duo’s “Don’t Let Me” was the sprightly, nofrills single that eclipsed all other efforts by them in 2015. Now they’ve gone electric and have a new EP: GREYSHARKCANYON. Musically, the approach is still reductive, recalling poet Juan Ramon Jimenez’s dictum: “Oh what a sound of gold still remains.” The song “Ghost” shines brightest. (Brian Chidester)

A full five years stood between Mappa Mundi’s debut album and its second: 2015’s At Sea. It was worth it. The entire affair overflows with emotion and epigram, meted out in equal parts, and under-

scored by a mass of steampunk horns and strings. Indeed, no word is too ornamental here—just keep your thesaurus nearby. (Brian Chidester)

The key to this band’s originality is their light-asair instrumentation and effortless vocals (via Cody Fitzgerald and Molly Grund). “Waves” is their biggest hit; it sputters and swells with staccato guitars, floaty keyboards, and nimble stickwork. Here, as elsewhere, is a textured exploration of love, life, and growing up. (Adriana S. Ballester)

Afternoon Men’s single “The Transfer Station” mines the Counting Crows’ August and Everything After and yields a solid pièce de résistance about the discrepancies of taboo sex. He plays downtown urchin to her secret uptown yen for slums. Problem is, they’re not as different as they’d have us think. (Paolo De Gregorio)