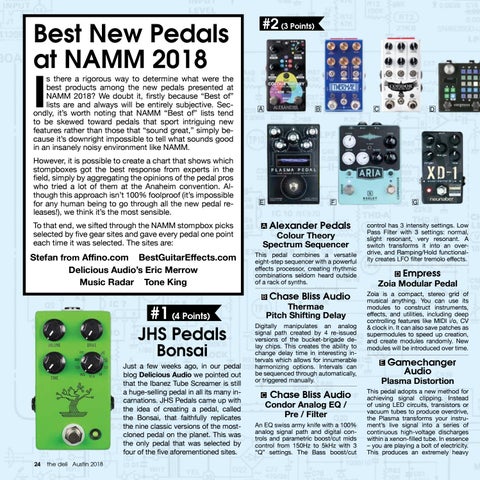 s there a rigorous way to determine what were the best products among the new pedals presented at NAMM 2018? We doubt it, firstly because “Best of” lists are and always will be entirely subjective. Secondly, it’s worth noting that NAMM “Best of” lists tend to be skewed toward pedals that sport intriguing new features rather than those that “sound great,” simply because it’s downright impossible to tell what sounds good in an insanely noisy environment like NAMM. however, it is possible to create a chart that shows which stompboxes got the best response from experts in the field, simply by aggregating the opinions of the pedal pros who tried a lot of them at the Anaheim convention. Although this approach isn’t 100% foolproof (it’s impossible for any human being to go through all the new pedal releases!), we think it’s the most sensible. To that end, we sifted through the NAMM stompbox picks selected by five gear sites and gave every pedal one point each time it was selected. The sites are:

#1 (4 Points) JHS Pedals Bonsai Just a few weeks ago, in our pedal blog Delicious audio we pointed out that the Ibanez Tube Screamer is still a huge-selling pedal in all its many incarnations. JhS Pedals came up with the idea of creating a pedal, called the Bonsai, that faithfully replicates the nine classic versions of the mostcloned pedal on the planet. This was the only pedal that was selected by four of the five aforementioned sites. 24

This pedal combines a versatile eight-step sequencer with a powerful effects processor, creating rhythmic combinations seldom heard outside of a rack of synths.

Digitally manipulates an analog signal path created by 4 re-issued versions of the bucket-brigade delay chips. This creates the ability to change delay time in interesting intervals which allows for innumerable harmonizing options. Intervals can be sequenced through automatically, or triggered manually.

An EQ swiss army knife with a 100% analog signal path and digital controls and parametric boost/cut mids control from 150hz to 5khz with 3 “Q” settings. The Bass boost/cut

zoia is a compact, stereo grid of musical anything. You can use its modules to construct instruments, effects, and utilities, including deep controlling features like MIDI i/o, Cv &amp; clock in. It can also save patches as supermodules to speed up creation, and create modules randomly. New modules will be introduced over time.

This pedal adopts a new method for achieving signal clipping. Instead of using LED circuits, transistors or vacuum tubes to produce overdrive, the Plasma transforms your instrument’s live signal into a series of continuous high-voltage discharges within a xenon-filled tube. In essence – you are playing a bolt of electricity. This produces an extremely heavy