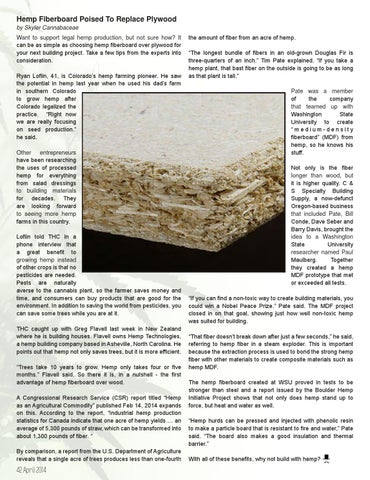 Hemp Fiberboard Poised To Replace Plywood by Skyler Cannabaceae Want to support legal hemp production, but not sure how? It can be as simple as choosing hemp fiberboard over plywood for your next building project. Take a few tips from the experts into consideration. Ryan Loflin, 41, is Colorado’s hemp farming pioneer. He saw the potential in hemp last year when he used his dad’s farm in southern Colorado to grow hemp after Colorado legalized the practice. “Right now we are really focusing on seed production.” he said. Other entrepreneurs have been researching the uses of processed hemp for everything from salad dressings to building materials for decades. They are looking forward to seeing more hemp farms in this country. Loflin told THC in a phone interview that a great benefit to growing hemp instead of other crops is that no pesticides are needed. Pests are naturally averse to the cannabis plant, so the farmer saves money and time, and consumers can buy products that are good for the environment. In addition to saving the world from pesticides, you can save some trees while you are at it. THC caught up with Greg Flavell last week in New Zealand where he is building houses. Flavell owns Hemp Technologies, a hemp building company based in Asheville, North Carolina. He points out that hemp not only saves trees, but it is more efficient. “Trees take 10 years to grow. Hemp only takes four or five months.” Flavell said. So there it is, in a nutshell - the first advantage of hemp fiberboard over wood. A Congressional Research Service (CSR) report titled “Hemp as an Agricultural Commodity” published Feb 14, 2014 expands on this. According to the report, “Industrial hemp production statistics for Canada indicate that one acre of hemp yields … an average of 5,300 pounds of straw, which can be transformed into about 1,300 pounds of fiber. “ By comparison, a report from the U.S. Department of Agriculture reveals that a single acre of trees produces less than one-fourth

the amount of fiber from an acre of hemp. “The longest bundle of fibers in an old-grown Douglas Fir is three-quarters of an inch.” Tim Pate explained. “If you take a hemp plant, that bast fiber on the outside is going to be as long as that plant is tall.” Pate was a member of the company that teamed up with Washington State University to create “medium-density fiberboard” (MDF) from hemp, so he knows his stuff. Not only is the fiber longer than wood, but it is higher quality. C &amp; S Specialty Building Supply, a now-defunct Oregon-based business that included Pate, Bill Conde, Dave Seber and Barry Davis, brought the idea to a Washington State University researcher named Paul Maulberg. Together they created a hemp MDF prototype that met or exceeded all tests. “If you can find a non-toxic way to create building materials, you could win a Nobel Peace Prize.” Pate said. The MDF project closed in on that goal, showing just how well non-toxic hemp was suited for building. “That fiber doesn’t break down after just a few seconds,” he said, referring to hemp fiber in a steam exploder. This is important because the extraction process is used to bond the strong hemp fiber with other materials to create composite materials such as hemp MDF. The hemp fiberboard created at WSU proved in tests to be stronger than steel and a report issued by the Boulder Hemp Initiative Project shows that not only does hemp stand up to force, but heat and water as well. “Hemp hurds can be pressed and injected with phenolic resin to make a particle board that is resistant to fire and water,” Pate said. “The board also makes a good insulation and thermal barrier.” With all of these benefits, why not build with hemp? 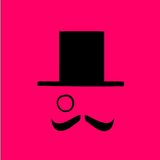