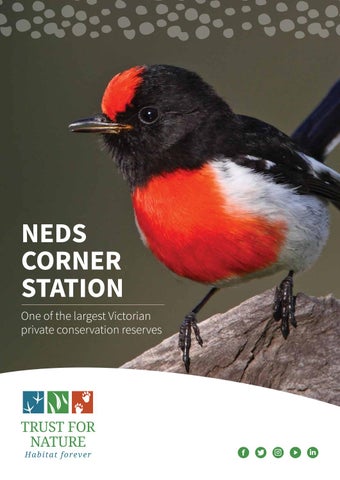 Conserving Victoria’s outback jewel Neds Corner Station is the largest freehold property in Victoria and also the biggest private conservation reserve in the state. Affectionately referred to as ‘Neds Corner’, this flagship Trust for Nature owned reserve provides important habitat for native plants and wildlife often not seen in other parts of the state. Neds Corner is an important part of Victoria’s conservation and cultural landscape and through ongoing rehabilitation work it has blossomed into a true jewel of Victoria’s outback. Situated in the Mallee region and adjacent to the Murray-Sunset National Park, this 30,000 hectare property represents a unique opportunity for nature conservation in Victoria. The property, purchased by Trust for Nature in 2002, is home to almost 1000 species, including 77 threatened plants, 24 reptiles and more than 120 types of birds. Researchers have also found

21 species not previously known to science. Among its many wonders is a new species of daisy for Victoria. The Large Hard-head Daisy is symbolic of the rich diversity of plants and animals that call Neds Corner home. Other treasures include a population of the nationally threatened Growling Grass Frog and a new species of fungus. Under the care of Trust for Nature, Neds Corner has shown dramatic recovery from a heavily grazed agricultural holding to a conservation reserve of national significance. What were bare sand hills and hard, compacted plains are now vegetated with saltbush and blue bush vegetation. This work has been led by Trust for Nature’s field staff, supported by project partners, staff and volunteers. Stock have been removed, extensive rabbit and fox control implemented, and large-scale revegetation carried out across the property.

It was no small feat for Trust for Nature to purchase the 30,000 hectares Neds Corner Station property in the Mallee region of Victoria in 2002. We had a vision for the land: To be an inspirational example of ecological restoration, promoting the significance of biodiversity through informing and educating for public benefit while protecting native vegetation on private land in Victoria forever. 1

The geology of Neds Corner goes back 3.5 million years when the Mallee was inundated by sea. After sea levels dropped, the Murray River was 20 to 30 times larger than it is now, and formed the vast floodplain that now constitutes the Murray Scroll Belt.

Neds Corner was first settled by Europeans for agriculture in 1849. A leasehold was taken up by Edward Bagot who ran cattle, brumbies and sheep for 25 years.

The current river channel is up to 15 kilometres north of the southern edge of the ancient floodplain; the floodplain edge is very noticeable when approaching Neds Corner homestead from the highway as you literally drop down onto the Murray Scroll Belt.

In the 1870s, Bagot sold the property and by 1911 the station was possibly six times its current size. After World War l, some of the leaseholds were broken up for soldier settlements and a group of Even more dramatic is the view from the air where 18 men was granted freehold to parts of the Neds Corner lease in 1938, forming the Neds Corner you can see the scroll-like patterns tracing the ancient meanderings of the Murray, its anabranches Pastoral Company Pty Ltd. and billabongs. Neds Corner is the only occurrence From the Kidman era to the of this landform in Victoria.

First People on Country The property is on Ngintait Country and the first people of Millewa Mallee. The property features numerous important cultural heritage sites including ancestral burials, scar trees that provided bark for canoes, shields and other items, oven mounds, fireplaces, stone tool artefacts and shell middens. Neds Corner is culturally important to Traditional Owners today and they participate and contribute knowledge to its ongoing management.

Drought ravaged south-eastern Australia in the 1940s and by 1948, the property was sold to the Kidman Pastoral Company, becoming part of its agricultural empire which encompassed three per cent of Australia. During the Kidman era some leases to the west of the current station that extended to the South Australian border were not renewed by the government and were instead added to the Murray Sunset National Park in 1991. Kidman Pastoral Group sold Neds Corner shortly afterwards. Trust for Nature bought it in 2002.

Fauna At least 25 species of small to medium sized terrestrial mammals are known or considered likely to have occurred in north-west Victoria in the mid-19th century. Of these, five species are globally extinct; 13 species are regionally extinct; and seven species are still in existence. Five of these seven surviving species have been recorded on Neds Corner. The loss of habitat as a a result of clearing, overgrazing by stock and rabbits, and predation by feral cats and foxes are considered the primary causes of the extinctions and declines of so many of Neds Cornerâ&#x20AC;&#x2122;s mammal species, and other fauna. Since Trust for Natureâ&#x20AC;&#x2122;s acquisition of the property, extensive natural regeneration, suplemented by revegetation, and in conjunction with ongoing rabbit and fox control programs has enabled recovery of some animal populations. Reptiles and frogs are a major component of fauna diversity at Neds Corner. The property has more than 30 species, including the threatened De Visâ&#x20AC;&#x2122; Banded Snake, Bandy-bandy, Carpet Python, Hooded Scaly-foot and Growling Grass Frog, with

new species for the property still being found. More than 120 bird species have been recorded at Neds Corner, including inland species such as the Crimson Chat, Orange Chat, Inland Dotterel and Pied Honeyeater. Bird surveys have shown increases in the frequency of some woodland dependent birds such as the Chestnut-crowned Babbler and Red-capped Robin as habitat coverage and quality has improved. It is hoped that large-scale restoration of another 10,000 hectares of woodland habitat will lead to even more striking improvements in bird diversity. At a micro level, invertebrates represent a large percentage of the fauna diversity at Neds Corner, with approximately 400 species documented during a two week Bush Blitz, with 20 species recorded as new to science, including 13 new spiders.

Neds Corner is located in the driest area of Victoria, yet this vast property supports almost 1,000 different species of plants, animals and invertebrates.

Flora Neds Cornerâ&#x20AC;&#x2122;s vast alluvial plain covered with saltbush and bluebush supports many species of native plants restricted just to this far northwest corner of the state. Other major habitats found at Neds Corner include semi-arid woodland, Mallee woodland, Black Box woodland, riverine woodlands, and a range of wetlands. In the 16 years since domestic stock removal and ongoing rabbit and weed control, there has been a dramatic increase in the cover of native vegetation, not just from supplementary planting and direct seeding but also from natural regeneration. In 2011, widespread natural germination of Murray Pines occurred and Sandhill Wattle seedlings

were observed on one rise where no parent plant was known to occur, indicating the possible presence of a viable seed bank. Because of Neds Cornerâ&#x20AC;&#x2122;s location at the extreme edge of the rangelands and on the Murray River floodplain, it has an extraordinary diversity of plants found almost nowhere else in Victoria. New records for Victoria, or major new populations of threatened plants keep on appearing, as the habitat recovers and major threats are kept under control. More than 320 different species have been recorded, of which about 80 are classified as threatened. At least four new species for Victoria have been discovered in recent years, as well as one plant, the Multi-headed Sneezeweed, which was last recorded in Victoria in 1853.

When Trust for Nature bought Neds Corner in 2002 it had been an agri ecosystems had been extensively cleared or degraded by stock grazin such as water extraction from the Murray River, extensive native veget were also having significant impacts on the health of the land and its

Progress The effort to turn around the ecological health of Neds Corner has been enormous and has included: • • • • • • • •

20,000 rabbit warrens treated 1,000 km of rabbit bait-lines undertaken Monthly fox control over 30,000 hectares Removal of cropping from 1,200 hectares and subsequent restoration Planting of >20,000 trees and shrubs Direct seeding of trees and shrubs along >400 kilometres Establishment of a 500 hectare herbivore and predator exclosure Regular environmental watering program established across more than 500 hectares of wetland

Restoration efforts have helped stabilise soils, encouraged reestablishment of other flora and has provided habitat for birds, reptiles and a range of small mammals. People are also benefiting from the rejuvenated property. Neds Corner is frequently visited by nature lovers, educational groups such as schools and universities, corporate and philanthropic supporters, volunteers, work-based welfare participants, and members of like-minded environmental organisations looking to share knowledge and further conservation science. Trust for Nature’s management of Neds Corner is also enabling research of the landscape through archeological digs and engagement with Traditional Owners, bringing to life the vast history of this beautiful land. Thanks to partner funds, Neds Corner is an attraction for nearby farmers and researchers from institutions and special interest groups.

icultural property for more than 100 years and all of its natural ng, cropping, irrigation and rabbits. Larger environmental issues tation removal across the Mallee region and increased soil salinity wildlife.

Fighting extinction Perhaps one of the most exciting developments since Trust for Natureâ&#x20AC;&#x2122;s purchase of Neds Corner is that after many years of ongoing predator control efforts, the establishment of a 500 hectare predator free exclosure will enable the Trust to explore the potential to reintroduce regionally extinct animals to the property. The exclosure, together with the proposed establishment of woodland cover across 10,000 hectares, will result in a thriving example of conservation best practice and what can be achieved through partnership. Recovery of riverine woodlands and Mallee/ semi-arid woodlands will be extremely important to secure the future of threatened species like the Regent Parrot and other precious wildlife. Continued focus on predator and weed control and encouraging habitat growth will go a long way towards reviving the propertyâ&#x20AC;&#x2122;s ecosystem.

We are incredibly grateful to the support from our partners, generous individuals and organisations who have helped us acquire Neds Corner Station and assist in funding its ongoing restoration. Trust for Nature is a not-for-profit organisation that relies on generous support for our work to protect Victoria’s amazing biodiversity – from old growth trees, wildflowers and fungi, to invertebrates, birds and mammals and everything in between. Not only do we focus on individual species, but also landscape scale projects, all of which form a healthy and rich environment. A healthy environment equals healthy people, healthy communities, and a bright future for generations to come. We invite you to join us to help continue to conserve native plants and wildlife on private land forever. Visit trustfornature.org.au/donate We couldn’t do this without your vital support.

Trust for Nature (Victoria) 5/379 Collins Street Melbourne Victoria 3000 ABN: 60 292 993 543 Email: trustfornature@tfn.org.au Phone: 1800 999 933 Web: www.trustfornature.org.au © Copyright 2018 Trust for Nature (Victoria) In the interest of conservation, please keep this brochure for future reference. If you no longer need it, please pass it on or add it to reading matter in a public place. Thank you. 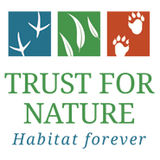 Neds Corner Station is the largest freehold property in Victoria and also the biggest private conservation reserve in the state. Affectionat...

Neds Corner Station is the largest freehold property in Victoria and also the biggest private conservation reserve in the state. Affectionat...