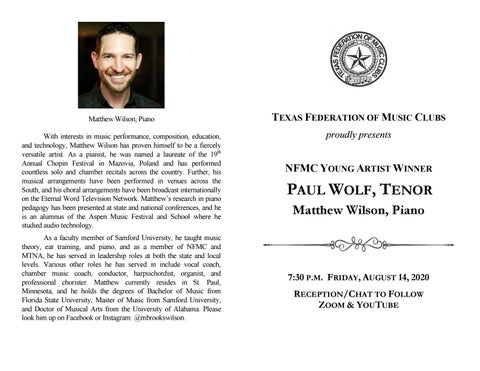 With interests in music performance, composition, education, and technology, Matthew Wilson has proven himself to be a fiercely versatile artist. As a pianist, he was named a laureate of the 19th Annual Chopin Festival in Mazovia, Poland and has performed countless solo and chamber recitals across the country. Further, his musical arrangements have been performed in venues across the South, and his choral arrangements have been broadcast internationally on the Eternal Word Television Network. Matthewâ&#x20AC;&#x2122;s research in piano pedagogy has been presented at state and national conferences, and he is an alumnus of the Aspen Music Festival and School where he studied audio technology.

As a faculty member of Samford University, he taught music theory, ear training, and piano, and as a member of NFMC and MTNA, he has served in leadership roles at both the state and local levels. Various other roles he has served in include vocal coach, chamber music coach, conductor, harpsichordist, organist, and professional chorister. Matthew currently resides in St. Paul, Minnesota, and he holds the degrees of Bachelor of Music from Florida State University, Master of Music from Samford University, and Doctor of Musical Arts from the University of Alabama. Please look him up on Facebook or Instagram: @mbrookswilson.

Paul Wolf, Tenor Paul Wolf, tenor, is an emerging artist and private teacher in the Birmingham area. Mr. Wolf’s recent engagements include Opera Birmingham as Spoletta in Tosca, Birmingham Music Club as Ralph Rackstraw in HMS Pinafore. Past season highlights include Benvolio in Romeo et Juliette with Opera Birmingham; Tamino in Die Zauberflöte, and Roy Johnson in The Light in the Piazza with Seagle Music Colony; Sam Kaplan in Street Scene, and Fenton in Die lustigen Weiber von Windsor with University of Alabama Opera Theatre; Alfred in Die Fledermaus and Cpt. Dick Warrington in Naughty Marietta with Birmingham Music Club; Stewpot in South Pacific with Ash Lawn Opera (nor Charlottesville Opera); Second Priest in Die Zauberflöte with Opera Roanoke. Mr. Wolf is a former Seagle Music Colony Young Artist, a Young Artist Apprentice with Charlottesville Opera, as well as a member of Opera Roanoke’s Young Artist Apprentice Program. Mr. Wolf is the 2019 NFMC Young Artist Man’s Voice Winner from their 60th Biennial Competition in Jacksonville, Florida. He also placed Second in the 2016 MTNA National Young Artist Vocal Competition in San Antonio, Texas. Upcoming engagements include creating the role of John Henry Shaw in a brand-new opera, Let Us Now Praise Famous Men written by Joseph Landers as a collaboration between University of Alabama Opera Theatre and the Tuscaloosa Symphony Orchestra for the State of Alabama’s Bicentennial. 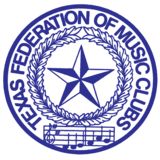