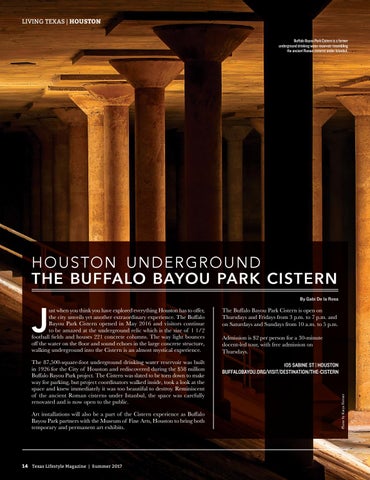 HOUSTON UNDER GROUND THE BUFFALO BAYOU PARK CISTERN ust when you think you have explored everything Houston has to offer, the city unveils yet another extraordinary experience. The Buffalo Bayou Park Cistern opened in May 2016 and visitors continue to be amazed at the underground relic which is the size of 1 1/2 football fields and houses 221 concrete columns. The way light bounces off the water on the floor and sound echoes in the large concrete structure, walking underground into the Cistern is an almost mystical experience.

The Buffalo Bayou Park Cistern is open on Thursdays and Fridays from 3 p.m. to 7 p.m. and on Saturdays and Sundays from 10 a.m. to 5 p.m.

The 87,500-square-foot underground drinking water reservoir was built in 1926 for the City of Houston and rediscovered during the $58 million Buffalo Bayou Park project. The Cistern was slated to be torn down to make way for parking, but project coordinators walked inside, took a look at the space and knew immediately it was too beautiful to destroy. Reminiscent of the ancient Roman cisterns under Istanbul, the space was carefully renovated and is now open to the public.

Art installations will also be a part of the Cistern experience as Buffalo Bayou Park partners with the Museum of Fine Arts, Houston to bring both temporary and permanent art exhibits.

Admission is $2 per person for a 30-minute docent-led tour, with free admission on Thursdays.