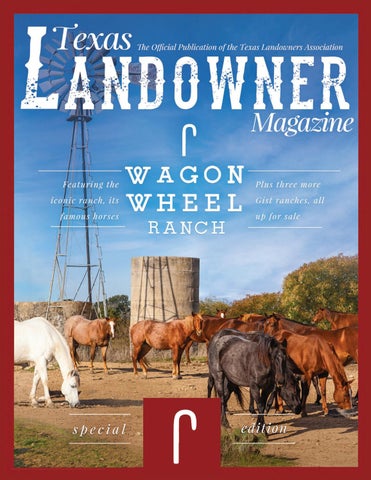 ike a scene from nineteenth-century Texas, the whole prairie towards the

horizons is alive with mustangs, the pounding of hooves and fiery red Texas sunset. In a modern world, the places you can go to see scenes like this are becoming all but extinct. But, ninety miles northeast of Austin, sits Wagon Wheel Ranch, where scenes like this are still very much alive.

Itâ&amp;#x20AC;&amp;#x2122;s a place one can still stand in wonder of unobstructed horizons, wide open ranges and majestic herds of the ranchâ&amp;#x20AC;&amp;#x2122;s famous quarter horses. Once your boots hit the ground at Wagon Wheel Ranch, you are immediately overcome by the heritage of both the famous quarter horse bloodline and family behind it. Each step into the red Texas dirt, a reminder that cowboys and mustangs were born to breathe Texas air.

While the equine operation is considered the highlight of the ranchâ&amp;#x20AC;&amp;#x2122;s legacy, the Gists have raised a number of unique and exotics animals through the years, ranging from Buffalo to Striped Zebra hybrids. Today, the family lands are still home to a herd of several hundred Beefmaster- Angus cattle.

and tall oak trees. Inside, a 15-foot fence still stands

where the family once kept a pride of African Lions.

ge hills that give this property its name

u r fascination with trees arises from their beauty,

ometime around 2006, the Millegan family of Georgetown, TX decided to make a purchase of 160 acres just outside of Belton. Johnny and Judy owned a hardware store at the time, but made a move on a small high-fenced

was not suitable for cattle grazing. Judy knew of a property in nearby Leander that raised elk, and set up an appointment to meet with the owner to discuss the opportunity to work toward breeding the large game animals. Upon arrival, Judy discovered that the Leander rancher was more

most captivating or impressive are always the biggest, tallest, and oldest. When you see an anthe sky, it evokes a sense of awe and wonder. We can’t help but feel a deep respect bordering for a living thing to grow into such a stately presence. Oddly enough, that same aspect of

breeder,” and that is the direction their conversation went—foregoing the elk altogether. She decided to tell her son Jason, an avid hunter, of this new idea for a pious amounts of research, Jason and his parents decided to work toward a by calling registered deer breeders, gathering as much free knowledge that they could on the industry and genetics and attending auctions to get a feel for pricing along with industry customs. labor to many of their established contacts, a step that proved invaluable in testing the waters before

landowners from wanting to plant them. One of the most common concerns we hear when we suggest planting trees is that they are such a long-term investment. Many landowners into improvements that will produce results in

that had previously been more than foreign to them. Finally, in the summer of 2007,

love to plant some trees for my kids and grandkids, but what can we do to see some results in my lifetime?” Most people see tree planting as something done for the good of posterity. While that is certainly true, tree planting can make a the right species in the right spot, and you can habitat. A planting design and strategy should

began the establishment of Cross construction on their, now, 17 pens that total approximately 15 acres of

things you can do to improve wildlife habitat. A tree can provide two of the three elements wildlife need to survive (food and shelter, with

ver the last four decades I have been blessed to work and live with white-tailed deer in every state and province from Mexico to Canada. Along the way, I have met some of the greatest folks—private landowners— who have dedicated their time, sweat and money to making their land a better place for wildlife. Unfortunately, however, many of these landowners

When asked, many landowners tell me their goal is to produce bigger bucks.

veloped goal would be something like, “We want to produce 5 mature bucks ference lies in that a true goal is a target against which data can be collected and -

at not achieving their expectations for

in a successful whitetail management for failure is not having a management plan—or a wildlife management plan plan and objectives. So, this article is aimed at informing you about how to or set of goals. establish goals for your wildlife management program and developing a T H E P LA N plan to accomplish these goals. Once you have established your goals, the next step is develop a set of objecW H AT I S A G O A L tives to achieve the goal. For example, one of the goal is to have a deer herd There is a huge di erence between ifwith at least 25% mature (4.5 years or older) bucks, an objective would be a goal and an expectation.. to produce and protect enough bucks to allow this proportion of animals

s the holiday festivities come to an end, those of us who are used to spending time outdoors may become a little bit stir-crazy! Even though the plants may be dormant, our management practices do not have to be. Here are some winter practices to consider for land and livestock improvement.

Brush Management that can be done when the weather is not sweltering: 1) cut stump treatment and 2) stem spray method. Both of these methods involve a mixture of triclopyr and diesel applied to either the freshly cut stump or stem of brush species.

Fecal and Forage Sampling itor diet quality and see if you need to adjust your supplemental feeding program (cnrit.tamu.edu/ ganlab). Alternatively, if purchasing hay, conduct a

forage at the beginning of the winter will indicate the amount of grass you have for the winter and determine if adjustments in your stocking rate need to be made or if you can expect to need hay.

this year and/or where there is bare ground or you fed hay. Learn to identify the problem plant in its early stages of growth so treatment

Want Your Shot at a

All Out Ranch Improvements

VERYTHING’S BIGGER IN TEXAS, a common phrase heard across the nation. When referring to our feral hog problem, this couldn’t be any closer to the truth.

Texas is home to an estimated 2.6 million feral hogs, the largest number of hogs in the nation, and it’s not getting any smaller. Part of the reasoning behind this is that they have very few natural predators and reproduce rapidly.

Venture to Utopia Where the Proof Is In the Name:

Texas AgriLife Extension Service estimates that feral hogs cause $500 million in damages statewide. No matter which side of the fence you’re on, the hunter that enjoys seeing hogs at the feeder, or the farmer that loses thousands of dollars to damages each year, without extensive management, this problem will continue to get worse. the most common are hunting, trapping, hunting with dogs, and hunting out of a helicopter. Some of these are very successful but costly, while others are less expensive but have little impact on the overall management of feral hogs. 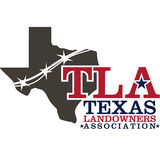