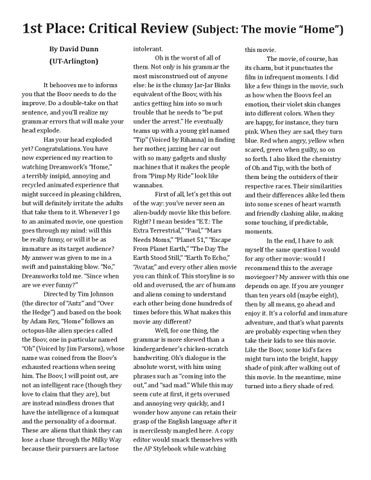 1st Place: Critical Review (Subject: The movie “Home”) By David Dunn (UT-Arlington) It behooves me to informs you that the Boov needs to do the improve. Do a double-take on that sentence, and you’ll realize my grammar errors that will make your head explode. Has your head exploded yet? Congratulations. You have now experienced my reaction to watching Dreamwork’s “Home,” a terribly insipid, annoying and recycled animated experience that might succeed in pleasing children, but will definitely irritate the adults that take them to it. Whenever I go to an animated movie, one question goes through my mind: will this be really funny, or will it be as immature as its target audience? My answer was given to me in a swift and painstaking blow. “No,” Dreamworks told me. “Since when are we ever funny?” Directed by Tim Johnson (the director of “Antz” and “Over the Hedge”) and based on the book by Adam Rex, “Home” follows an octopus-like alien species called the Boov, one in particular named “Oh” (Voiced by Jim Parsons), whose name was coined from the Boov’s exhausted reactions when seeing him. The Boov, I will point out, are not an intelligent race (though they love to claim that they are), but are instead mindless drones that have the intelligence of a kumquat and the personality of a doormat. These are aliens that think they can lose a chase through the Milky Way because their pursuers are lactose

intolerant. Oh is the worst of all of them. Not only is his grammar the most misconstrued out of anyone else: he is the clumsy Jar-Jar Binks equivalent of the Boov, with his antics getting him into so much trouble that he needs to “be put under the arrest.” He eventually teams up with a young girl named “Tip” (Voiced by Rihanna) in finding her mother, jazzing her car out with so many gadgets and slushy machines that it makes the people from “Pimp My Ride” look like wannabes. First of all, let’s get this out of the way: you’ve never seen an alien-buddy movie like this before. Right? I mean besides “E.T.: The Extra Terrestrial,” “Paul,” “Mars Needs Moms,” “Planet 51,” “Escape From Planet Earth,” “The Day The Earth Stood Still,” “Earth To Echo,” “Avatar,” and every other alien movie you can think of. This storyline is so old and overused, the arc of humans and aliens coming to understand each other being done hundreds of times before this. What makes this movie any different? Well, for one thing, the grammar is more skewed than a kindergardener’s chicken-scratch handwriting. Oh’s dialogue is the absolute worst, with him using phrases such as “coming into the out,” and “sad mad.” While this may seem cute at first, it gets overused and annoying very quickly, and I wonder how anyone can retain their grasp of the English language after it is mercilessly mangled here. A copy editor would smack themselves with the AP Stylebook while watching

this movie. The movie, of course, has its charm, but it punctuates the film in infrequent moments. I did like a few things in the movie, such as how when the Boovs feel an emotion, their violet skin changes into different colors. When they are happy, for instance, they turn pink. When they are sad, they turn blue. Red when angry, yellow when scared, green when guilty, so on so forth. I also liked the chemistry of Oh and Tip, with the both of them being the outsiders of their respective races. Their similarities and their differences alike led them into some scenes of heart warmth and friendly clashing alike, making some touching, if predictable, moments. In the end, I have to ask myself the same question I would for any other movie: would I recommend this to the average moviegoer? My answer with this one depends on age. If you are younger than ten years old (maybe eight), then by all means, go ahead and enjoy it. It’s a colorful and immature adventure, and that’s what parents are probably expecting when they take their kids to see this movie. Like the Boov, some kid’s faces might turn into the bright, happy shade of pink after walking out of this movie. In the meantime, mine turned into a fiery shade of red. 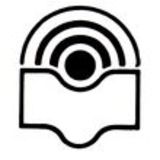