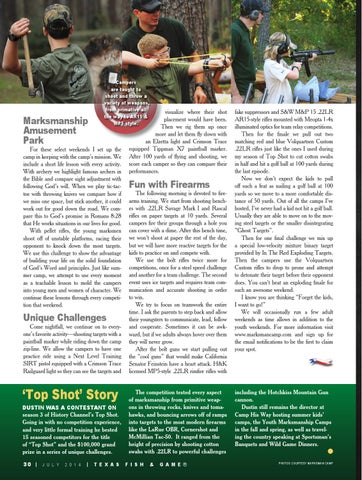 Campers are taught to shoot and throw a variety of weapons, from primative all the way to AR15 & MP5 style.

For these select weekends I set up the camp in keeping with the camp’s mission. We include a short life lesson with every activity. With archery we highlight famous archers in the Bible and compare sight adjustment with following God’s will. When we play tic-tactoe with throwing knives we compare how if we miss one space, but stick another, it could work out for good down the road. We compare this to God’s promise in Romans 8:28 that He works situations in our lives for good. With pellet rifles, the young marksmen shoot off of unstable platforms, racing their opponent to knock down the most targets. We use this challenge to show the advantage of building your life on the solid foundation of God’s Word and principles. Just like summer camp, we attempt to use every moment as a teachable lesson to mold the campers into young men and women of character. We continue these lessons through every competition that weekend.

Come nightfall, we continue on to everyone’s favorite activity—shooting targets with a paintball marker while riding down the camp zip-line. We allow the campers to have one practice ride using a Next Level Training SIRT pistol equipped with a Crimson Trace Railguard light so they can see the targets and

‘Top Shot’ Story DUSTIN WAS A CONTESTANT ON

season 3 of History Channel’s Top Shot. Going in with no competition experience, and very little formal training he bested 15 seasoned competitors for the title of “Top Shot” and the $100,000 grand prize in a series of unique challenges. 30 |

visualize where their shot placement would have been. Then we rig them up once more and let them fly down with an Elzetta light and Crimson Trace equipped Tippman X7 paintball marker. After 100 yards of flying and shooting, we score each camper so they can compare their performances.

The following morning is devoted to firearms training. We start from shooting benches with .22LR Savage Mark I and Rascal rifles on paper targets at 10 yards. Several campers fire their groups through a hole you can cover with a dime. After this bench time, we won’t shoot at paper the rest of the day, but we will have more reactive targets for the kids to practice on and compete with. We use the bolt rifles twice more for competitions, once for a steel speed challenge and another for a team challenge. The second event uses ice targets and requires team communication and accurate shooting in order to win. We try to focus on teamwork the entire time. I ask the parents to step back and allow their youngsters to communicate, lead, follow and cooperate. Sometimes it can be awkward, but if we adults always hover over them they will never grow. After the bolt guns we start pulling out the “cool guns” that would make California Senator Feinstein have a heart attack. H&K licensed MP5-style .22LR rimfire rifles with The competition tested every aspect of marksmanship from primitive weapons in throwing rocks, knives and tomahawks, and bouncing arrows off of ramps into targets to the most modern firearms like the LaRue OBR, Cornershot and McMillian Tac-50. It ranged from the height of precision by shooting cotton swabs with .22LR to powerful challenges F I S H

fake suppressors and S&W M&P 15 .22LR AR15-style rifles mounted with Meopta 1-4x illuminated optics for team relay competitions. Then for the finale we pull out two matching red and blue Volquartsen Custom .22LR rifles just like the ones I used during my season of Top Shot to cut cotton swabs in half and hit a golf ball at 100 yards during the last episode. Now we don’t expect the kids to pull off such a feat as nailing a golf ball at 100 yards so we move to a more comfortable distance of 50 yards. Out of all the camps I’ve hosted, I’ve never had a kid not hit a golf ball. Usually they are able to move on to the moving steel targets or the smaller disintegrating “Ghost Targets”. Then for one final challenge we mix up a special low-velocity mixture binary target provided by In The Red Exploding Targets. Then the campers use the Volquartsen Custom rifles to drop to prone and attempt to detonate their target before their opponent does. You can’t beat an exploding finale for such an awesome weekend. I know you are thinking “Forget the kids, I want to go!” We will occasionally run a few adult weekends as time allows in addition to the youth weekends. For more information visit www.marksmancamp.com and sign up for the email notifications to be the first to claim your spot.

including the Hotchkiss Mountain Gun cannon. Dustin still remains the director at Camp His Way hosting summer kids’ camps, the Youth Marksmanship Camps in the fall and spring, as well as traveling the country speaking at Sportsman’s Banquets and Wild Game Dinners. 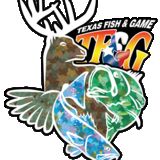 The Number-One Fishing & Hunting Source in Texas since 1984.

The Number-One Fishing & Hunting Source in Texas since 1984.