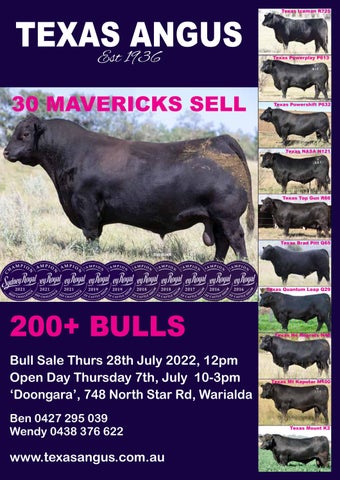 Texas Angus’s Champion Export Pen also proved to be super profitable, $1,859 more profitable than the lowest pen of the competition. Once you crunch the numbers on the value of cattle that perform, it is easy to see why these higher performing genetics are so valuable and important to feedlotters. Our Champion and Mike MacCue, Ben, Gill Leeds &amp; Wendy Reserve Champion Mayne inspecting RAS entries at Wilga Domestic pens Feedlot had the highest marble score of the domestic competition, plus our Champion Export pen was the highest marbling pen and individual of the entire competition.

2021 RAS Beef Challenge - Wilga Feedlot NSW After a year of hiatus, the Sydney Royal Beef Challenge was back and once again Texas Angus dominated the podium. Of the 8 championship broad ribbons on offer Texas Angus took home 5! Texas Angus, once again was awarded the following has the l Champion 70 Day Domestic Pen 2021 RNA Paddock to Palate - EKKA Cecil Plains QLD l Reserve Champion 70 Day Domestic Pen year, was Texas Angus’s first time entering the EKKA’s **Highest Marble score up to 7 with only 100 days on Last feed! l Champion Domestic 70 Day Individual RNA Paddock to Palate competition with 2 pens in Class 40 - 100 Day Export HGP Free Class. We scraped the barrel l Reserve Champion 70 Day Individual and found 14 steers that just slipped in the weight range and l Champion 100 Day Export Pen really wasn’t expecting anything special as these steers were l Highest Marbling Pen for Dom, Exp &amp; Ind weaned at 3 weeks of age during the drought! But to be l Most Profitable Dom &amp; Exp Pen &amp; Dom Ind placed 2nd and 6th in the daily weight gain section at the field day against 203 steers and to just miss the blue ribbon by For the 6th consecutive year, Texas Angus won the profitability 0.065kgs/day was such a thrill. To then end up being placed section of both the domestic and export pens. We placed 2nd and 4th OVERALL to the Champion Pen was an incredible 1st, 2nd, 3rd for both profitability and daily weight gain in result for us. the domestic invidual It was icing on the cake to Lachie, Kate Cowan, Rosie &amp; Will section, plus winning Ben with the Varidel Family at the best eating quality have clients such as the Mayne Beef Feedlot City individual export animal. Varidel family who also were first time entrants, We have always been winning the eating quality focused on profitability section of Class 37 with in our breeding program Texas progeny and and it’s heartening to be Aurelian Pastoral taking rewarded with our 6th out the Champion Pen of year of winning this all Class 38! important section of the feeder carcase trial. Beef Australia - 2021 ANZ National Beef Carcase Competition - Rockhampton QLD

We have always said every facet of the beef industry needs to make money whether it’s the breeder, the backgrounder, the feeder, processor and at point of sale. At Texas Angus we do not just focus on the cow calf producer but the industry as a whole where all sectors are profitable from the genetics we breed.

Off the back of winning the largest Class (6) at the 2018 National Beef Carcase competition we entered more steers last year and had 2 pens that were the equal highest for marble score in that same Class 6 (285 animals) and this class has always been the biggest of Australia’s largest Feeder and Carcase Competition.

Equal Highest 2nd Highest marbling pen in their classes at Beef Australia Our Champion Domestic 70 Day Pen was $1,851 more profitable than the lowest pen and the most profitable animal, a Texas heifer, was $928 more profitable.

We also had 2 pens in Class 5 Grainfed Heavy Trade that placed equal 2nd highest marble score out of 138 animals (46 pens) from across Australia and one of these pens placed 7th OVERALL.

Paddock to Butcher Shop - Texas beef features in Kilcoy Butchery &amp; New Auctioneer this for year’s sale! Pete and Pat Stanton of Kilcoy Butchers have been clients of Texas Angus purchasing our bulls for many years. Their belief in our program is phenomenal! The South Eastern QLD butchery is a true paddock to plate business The best in the business retires &amp; Wayne York breeding their own top quality Angus beef to supply their becomes our New Guest Auctioneer loyal customers of Kilcoy and SE Queensland. We can not thank Michael Glasser of Ray White GTSM Ben &amp; Pat Stanton Pete and Pat are so passionate about for doing the most amazing auctioneering at Texas Angus in the Kilcoy the standard of their through not only all the good times but the difficult years Butcher Shop butcher shop that as well. We will miss not having that jovial but ever so they approached professional man in the Texas us some years auction box and he has been ago to include the an instrumental part of the Texas Angus Story Texas team for so long. It was to showcase the so fitting to have ICEMAN has the genetics behind the and POWERPLAY sell under quality beef they his hammer, it’s etched in our **Highest Marble score up to 7 with only sell. We are100 verydays on feed! memories forever! honoured to be part of this unique Butcher Shop. Last year the Stanton’s Wayne York of York Auctioneering Emerald QLD will be purchased a Beast Mode son for $24,000 (pic above) our NEW guest Auctioneer alongside the GDL boys Pete Brazier and Mark Duthie. Wayne comes with an incredible experience auctioneering at Australia’s most prestigious northern sales including NCC Brahams and Glenlands Droughtmasters. Wayne is also a stud breeder of Simmentals and Drought Masters. He will also be an excellent adviser for anyone wanting a cattleman’s eye to give recommendations of our sale bulls.

NSW took top honours with their outstanding Angus pen of steers winning overall champion pen. These steers were described by Peter Baldwin, the Judge and CEO of the Australian Livestock and Property Agents, as “an Hailing Champion Heifer Pen outstanding line and blue blood genetics” and commended the Duddy’s on “their selection of bulls”. These winning steers were by a draft of bulls the Duddy family purchased at our 2020 Bull Sale with Ian Morgan of Ian Photo Karen Bailey The Land Morgan Livestock. Not to be outshone, once again Texas Angus’s long term client, Tony &amp; Tanya Haling of Woolbrook NSW won the Champion heifer Pen and also the runner up heifer pen.

Texas bull joined to Shorthorn heifers in the Riverina NSW

yarding and outstanding quality of this year’s weaners, and also an absolute credit to both families for their focused breeding programs. Texas Progeny up in the Gulf QLD

Maternal lines are the STRENGTH of the Texas’s herd

Texas UNDINE Z183 (AI) - who lived to 17 years of age has sold $1,100,00 worth of progeny not including semen sales of sons! At Texas we believe the maternal strength of our herd is second to none. We have never introduced another female since the 22 heifers that were imported from Scotland in 1936. Our females are expected to produce the same quality progeny whether it being joined to a flashy fad bull or just a back up bull. We source the best bulls worldwide to compliment our maternal cow families. All the photos on these two pages are direct descendants of Z183 - remember it’s the POWER of the COW!

Texas UNDINE H647 (AI) - is a highly productive daughter of the great Texas UNDINE Z183. H647 has some serious power, performance and presence and is now one of the stud’s most dominate breeding females just like her mother was. Her record on paper is so impressive with 19 sons currently averaging $35,947 topping at $225,000 for Texas ICEMAN R725, a Poss MAVERICK son. She has 7 sons in stud duties around Australia while we have retained 2 for our own herd. Texas POWERPLAY P613 was Australia’s 2nd highest priced bull of the 2020 Angus bull sale calendar and we have used him extensively as well as his brothers, POWERSHIFT P632, POWER ASSIST P605 and POWERBALL P614 with their sons featuring in our 2022 upcoming Bull Sale on 28th July. H647 will leave a huge legacy in the Texas herd and we are so excited with her future progeny to hit the ground!

Texas Angus 2022 Newsletter - showcasing our feeder and carcase trial achievements in 2021 as well as our clients incredible success this year plus displaying the consistent quality of the record 200+ bulls selling on Thursday 28th July 2022..