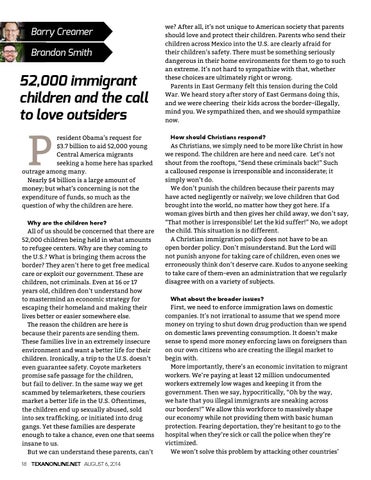 52,000 immigrant children and the call to love outsiders

resident Obama’s request for $3.7 billion to aid 52,000 young Central America migrants seeking a home here has sparked outrage among many. Nearly $4 billion is a large amount of money; but what’s concerning is not the expenditure of funds, so much as the question of why the children are here. Why are the children here? All of us should be concerned that there are 52,000 children being held in what amounts to refugee centers. Why are they coming to the U.S.? What is bringing them across the border? They aren’t here to get free medical care or exploit our government. These are children, not criminals. Even at 16 or 17 years old, children don’t understand how to mastermind an economic strategy for escaping their homeland and making their lives better or easier somewhere else. The reason the children are here is because their parents are sending them. These families live in an extremely insecure environment and want a better life for their children. Ironically, a trip to the U.S. doesn’t even guarantee safety. Coyote marketers promise safe passage for the children, but fail to deliver. In the same way we get scammed by telemarketers, these couriers market a better life in the U.S. Oftentimes, the children end up sexually abused, sold into sex trafficking, or initiated into drug gangs. Yet these families are desperate enough to take a chance, even one that seems insane to us. But we can understand these parents, can’t 18 TEXANONLINE.NET AUGUST 6, 2014

we? After all, it’s not unique to American society that parents should love and protect their children. Parents who send their children across Mexico into the U.S. are clearly afraid for their children’s safety. There must be something seriously dangerous in their home environments for them to go to such an extreme. It’s not hard to sympathize with that, whether these choices are ultimately right or wrong. Parents in East Germany felt this tension during the Cold War. We heard story after story of East Germans doing this, and we were cheering their kids across the border–illegally, mind you. We sympathized then, and we should sympathize now. How should Christians respond? As Christians, we simply need to be more like Christ in how we respond. The children are here and need care.  Let’s not shout from the rooftops, “Send these criminals back!” Such a calloused response is irresponsible and inconsiderate; it simply won’t do. We don’t punish the children because their parents may have acted negligently or naïvely; we love children that God brought into the world, no matter how they got here. If a woman gives birth and then gives her child away, we don’t say, “That mother is irresponsible! Let the kid suffer!” No, we adopt the child. This situation is no different. A Christian immigration policy does not have to be an open border policy. Don’t misunderstand. But the Lord will not punish anyone for taking care of children, even ones we erroneously think don’t deserve care. Kudos to anyone seeking to take care of them–even an administration that we regularly disagree with on a variety of subjects. What about the broader issues? First, we need to enforce immigration laws on domestic companies. It’s not irrational to assume that we spend more money on trying to shut down drug production than we spend on domestic laws preventing consumption. It doesn’t make sense to spend more money enforcing laws on foreigners than on our own citizens who are creating the illegal market to begin with. More importantly, there’s an economic invitation to migrant workers. We’re paying at least 12 million undocumented workers extremely low wages and keeping it from the government. Then we say, hypocritically, “Oh by the way, we hate that you illegal immigrants are sneaking across our borders!” We allow this workforce to massively shape our economy while not providing them with basic human protection. Fearing deportation, they’re hesitant to go to the hospital when they’re sick or call the police when they’re victimized. We won’t solve this problem by attacking other countries’ 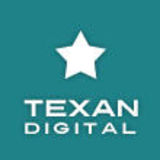 PEOPLE, NOT POLITICS Baptist volunteers have been serving alongside Catholic Charities workers to provide food, showers and rest for immigr...

PEOPLE, NOT POLITICS Baptist volunteers have been serving alongside Catholic Charities workers to provide food, showers and rest for immigr...