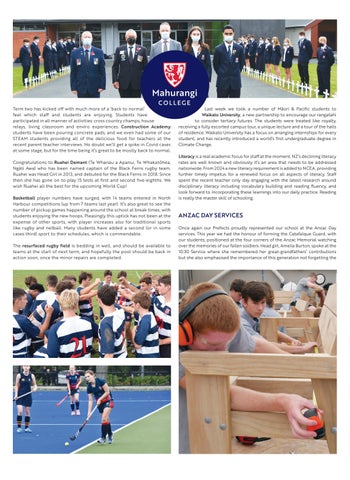 Term two has kicked off with much more of a ‘back to normal’ feel which staff and students are enjoying. Students have participated in all manner of activities: cross country champs, house relays, living classroom and enviro experiences. Construction Academy students have been pouring concrete pads, and we even had some of our STEAM students providing all of the delicious food for teachers at the recent parent teacher interviews. No doubt we’ll get a spike in Covid cases at some stage, but for the time being it’s great to be mostly back to normal. Congratulations to Ruahei Demant (Te Whanau a Apanui, Te Whakatōhea, Ngāti Awa) who has been named captain of the Black Ferns rugby team. Ruahei was Head Girl in 2013, and debuted for the Black Ferns in 2018. Since then she has gone on to play 15 tests at first and second five-eighths. We wish Ruahei all the best for the upcoming World Cup! Basketball player numbers have surged, with 14 teams entered in North Harbour competitions (up from 7 teams last year). It’s also great to see the number of pickup games happening around the school at break times, with students enjoying the new hoops. Pleasingly this uptick has not been at the expense of other sports, with player increases also for traditional sports like rugby and netball. Many students have added a second (or in some cases third) sport to their schedules, which is commendable. The resurfaced rugby field is bedding in well, and should be available to teams at the start of next term, and hopefully the pool should be back in action soon, once the minor repairs are completed.

Last week we took a number of Māori &amp; Pacific students to Waikato University, a new partnership to encourage our rangatahi to consider tertiary futures. The students were treated like royalty, receiving a fully escorted campus tour, a unique lecture and a tour of the halls of residence. Waikato University has a focus on arranging internships for every student, and has recently introduced a world’s first undergraduate degree in Climate Change. Literacy is a real academic focus for staff at the moment. NZ’s declining literacy rates are well known and obviously it’s an area that needs to be addressed nationwide. From 2024 a new literacy requirement is added to NCEA, providing further timely impetus for a renewed focus on all aspects of literacy. Staff spent the recent teacher only day engaging with the latest research around disciplinary literacy including vocabulary building and reading fluency, and look forward to incorporating these learnings into our daily practice. Reading is really the master skill of schooling.

ANZAC DAY SERVICES Once again our Prefects proudly represented our school at the Anzac Day services. This year we had the honour of forming the Catafalque Guard, with our students, positioned at the four corners of the Anzac Memorial watching over the memories of our fallen soldiers. Head girl, Amelia Burton, spoke at the 10:30 Service where she remembered her great-grandfathers’ contributions but she also emphasised the importance of this generation not forgetting the

This year, our cross country course was set around a 1.5km lap inside the perimeter of school grounds. Congratulations to all our competitors. All winners can be viewed on our Sport Facebook page.

sacrifices that were made. “My family members who served our country have long passed, and with them went the opportunity to sit and hear them tell their story. My generation is the first break in the chain of hearing their stories directly. I was too young to understand when they were with us, so now I am charged with learning and sharing their stories. We must remember. We must continue to pause and give thanks for all we have, for we have nothing without their service and sacrifice. We owe this privileged life, rich with freedom and choices, to them….” In his absence, Mr Tennant presented Head Boy, James Webb’s speech where James spoke about war being a nine letter word - sacrifice. “While staring death in the eye, ANZAC soldiers went to war, essentially giving their life with nothing but the love of their country as their protector. It is this legacy which we honour and remember. Not the horror, not the bloodshed but instead the sacrifice. A nine letter word which captures the very essence of the soldiers actions in Gallipoli 1915.”

The wreath was then placed by Rachel McGuire and Finn Stevenson who also spoke at the RSA at the conclusion of the service. Poppy Stenbeck, Deja Pareta, George Williams-Mart and Zac Cooper forming the Catafalque Guard. Our final act of remembrance was to hold ANZAC Assemblies on our return to school. A brief history was given, speeches were presented and after the haunting Last Post and then Reveille were played by ex-student Moana Winiana, the Prefects stepped forward and slowly walked down the aisle holding white crosses to remember the 90 young men from the Warkworth District who gave of their lives in World War I and II. ‘For those who leave to never return; for those who return but are never the same; we remember.’ Tony Giles - PRINCIPAL Catherine Johnston (Anzac Day Services) - HEAD OF YEAR 13

ACHIEVER OF THE MONTH

OUR PLACE | OUR PEOPLE | OUR STORIES 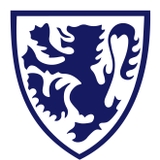