Trapped Copyright © 2013 by Edith O’Deer All rights reserved. No part of this story (e-book) may be reproduced or transmitted in any form or by any means, electronic or mechanical, including photocopying, recording, or by any information storage and retrieval system, without written permission of the author, except in the case of brief quotations embodied in critical articles or book reviews. This is a work of fiction. Names, characters, places and incidences are either a product of the author’s imagination or are used fictitiously. Any resemblance to any actual person, living or dead, events, or locales is entirely coincidental. Edited by Terry Wright Cover Art by Terry Wright ISBN 978-1-936991-57-0

By Edith O’Deer Andrea looked around the company party room, familiar faces everywhere, but not the one she was searching for. Theodore, the office heartthrob she had fallen in love with at first sight, was nowhere to be spotted. She wasn’t much for parties; she preferred to watch a rerun on TV over attending this 7th anniversary get-together, but her heart had convinced her to take a chance to be near him. Andrea had worked for this company over three years. She joined the team right after she quit her job as a nurse at a local hospital where management made a huge deal out of some missing anesthetics, and they increased security measures. Being under watchful eyes made her uncomfortable, so she decided the long hours on her feet weren’t worth the stress. Her mouth felt dry and sticky from nervous anxiety, and she needed something to wash down her angst. As she made her way through the noisy crowd to the beverage table, she avoided eye contact with her fellow employees and hoped to look inconspicuous. She didn’t need a loudmouth drunk from the mailroom to start in on

her. “Look everybody. It’s poor Andrea. She couldn’t get a date to a dog fight.” Or some jerk from accounting to slip her a note: Poor Andrea, For a good lay, call 9-1-1. She was a regular in the legal department, but no one took her complaints of sexual harassment seriously. One guy had even said she was lucky. Sexual harassment in the workplace was the closest she’d ever get to foreplay. It was hell being the office patsy. A variety of snacks on fancy plates caught her eye, but she wasn’t hungry. A bottle of apple cider looked appealing enough, so she grabbed it and drank a few swallows. It tasted a little too sour but otherwise okay. Leaning against the wall and taking a few sips, she waited for Theodore to appear. Minutes added up to a half an hour. She started to lose hope of seeing him. Finishing the bottle in a sub-zero mood, she put it on the table and strode out of the room. The buzz of loud chatter still echoed in her ears. She stopped in the hallway. Tired and disappointed, she touched the wall and stared at the exit doors. It was dusk outside, and the ceiling lights were turned off after working hours, so the hallway was mostly dark. A figure appeared behind the glass door. Before she could see who it was, her heart started pounding with hope...then joy. It was him. Theodore! The door opened and he walked in. He was no Adonis, average height, medium build, somewhat nerdy in those black-rimmed glasses,

but the way he wore his tie loose around his collar and smiled when he said hello, “Hello, Andrea,” caused butterflies in her belly to act like cats on catnip. She stood up straight and tried to look calm, though inside her a sexual storm was brewing. “I thought you weren’t going to make it.” He slowed his pace and looked her up and down. “I was hoping to see you here.” His words struck her like lightning, and she feared she might have misheard him. He wants to see me? Tingling all over, she had to ask for confirmation. His reason for seeing her could be different from what she hoped. He probably wanted to ask about a client or something. “What did you want to see me about?” she asked, feeling insignificant. He stopped in front of her, leaving an arm’s distance between them. “I wanted to discuss something with you, but you’re always so busy.” I’m never too busy for you, she screamed inside but struggled to remain unmoved on the outside, as if it didn’t matter to her whether she appeared available to him or not. She tried to think of something appropriate to say, something neutral, but he used her silence and said, “Do you have time for me now?” She melted, nodding vigorously. “I can spare a few minutes,” she said flatly to smother her enthusiastic reaction a little. Never seem available, her mother had told her. Men only want what they can’t

have. She heard soft music, but she wasn’t sure if it came from the party room or just in her head. He stepped so close to her that she could feel the heat of his body, and his masculine scent of aftershave filled her senses, stimulating her butterflies further. “I hope you don’t think I’m being too forward by saying you look beautiful tonight. There’s no need for electricity. You light up the room.” She gasped. Such beautiful words, and he’d said them to her. She felt flattered and special and lifted. Butterflies swarmed through her in a pleasant whirl of romantic emotion. “Thank you.” The words came out clumsy and squeaky. “That’s sweet.” But doubt kicked in. What lay behind his sweet words? Was he just toying with her? The office wallflower destined to become an old maid: manless, loveless, hopeless. His sudden attentiveness was too good to be true. “No one’s ever said anything that nice to me before.” “Shush, no whining tonight.” He put his finger across her lips. His touch was electrifying but: Did he really just say whining? She didn’t realize how pathetic she must’ve sounded to him. He removed his finger from her lips. “I’ve always wanted to tell you how I feel about you.” He bent to her lips, and pressed a kiss on her mouth that grew stronger with passion each passing second. She responded with a passion of her own that had been locked deep within

her for far too long. The tip of her tongue pushed between his teeth. His tongue greeted hers with caressing adoration. She grabbed his head with both hands. Her fingers clutched his glorious hair. Heaven was in her grasp. He responded by squeezing her so hard that her ribs hurt. She ignored the pain and focused on the waves of pleasure that rushed through her body. Hardly able to get a breath in through her nose, she closed her eyes and swore she’d die for this man’s love. And he certainly loved her. She could tell by the way he was kissing her. The old song that proved his love played in her head: If you wanta know, if he loves you so, it’s in his kiss. He loves me. But he suddenly pulled away. The kiss was over as unexpectedly as it had started. He looked at her with fiery passion in his eyes and a slightly sinful slant on his brows. “Let me take you home.” Still woozy from the kiss, the suggestion reached her mind and unfolded as if a huge romance story was waiting to be told. Never seem available, she heard her mother’s voice echo in her mind, demolishing the warm sensation that had filled her, unpleasantly cooling the special moment. She had to remain unavailable, a mystery to him he would want to solve. Men only want what they can’t have. She had to force herself to say, “Maybe some other time.” Like a snuffed out candle, the passion in his eyes turned to smoke. She immediately regretted turning down his offer. When

would she stop listening to her mother? “Call me,” Andrea added, hoping to rekindle his fire. “Yeah, sure.” His voice sounded distant and weary. He turned his back on her and strode toward the party room. She cursed herself for allowing him to slip away like that, but she couldn’t run after him like a whining little girl. She’d embarrassed herself enough already. What’s done is done. Fighting tears, she ran out the door and took a calming breath of cool autumn air. During the walk home, she paid little attention to her surroundings. The streets could have been abandoned, the homes demolished, the trees barren and gardens devoid of life. All that mattered was that Theodore had wanted to take her home. That alone was a big step forward in their relationship, but what did he expect? A roll in the hay? A night of passion? Men only want what they can’t have. And she had blown him off. Why was sex always about what men wanted? Didn’t she deserve to get what she wanted? An idea started to take form in her mind. When he called, and he would call, she was sure of it, she’d invite him to dinner. She’d fix him steak and salad, serve him hot tea. For that she’d get another one of those kisses. Maybe a dozen, a hundred, a thousand of those kisses. And her mother was not going to stop her. “Not this time,” she muttered. “This time I’m going to get what I want.”

To purchase this ebook short story, go to www.twbpress.com/trapped.html to find the links to the TWB Press bookstore, Amazon, Nook, Smashwords, and other fine online booksellers.

Edith O’Deer lived most of her life in a small village by the sea near the big city of Tallinn in Estonia. She has a daughter who loves to chase the dog and scare the fish in their fish tank. Edith likes reading, especially short ghost stories, and the lack of them in Estonia inspired her to write some of her own. She also decided to take on the challenge of writing in English, which she learned thanks to all the Hollywood movies she’s watched. Her great love is the sea and she loves living on the beach.

Enjoy other short stories and novels from TWB Press

A Choir of Angels (TWB Press, 2011) A short story by Marilyn Baron http://www.twbpress.com/achoirofangels.html

The Pearl of Death A Historical Thriller novel by Terry Wright http://www.twbpress.com/thepearlofdeath.html

When is a kiss not just a kiss? When it’s delivered with false promises. A workplace infatuation turns to obsession for wallflower Andrea, the butt of every office joke, when heartthrob Theodore pranks her with a passionate kiss, a kiss to die for. This is a love story gone horribly wrong. 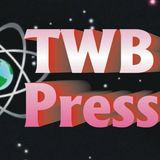