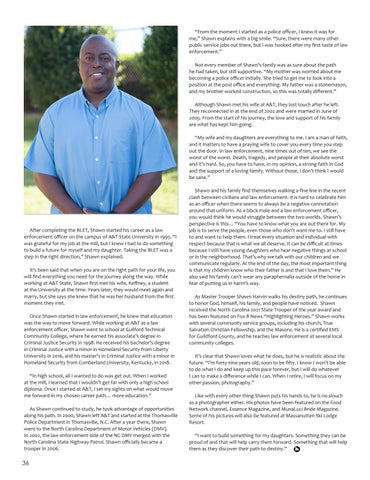 “From the moment I started as a police officer, I knew it was for me,” Shawn explains with a big smile. “Sure, there were many other public service jobs out there, but I was hooked after my first taste of law enforcement.” Not every member of Shawn’s family was as sure about the path he had taken, but still supportive. “My mother was worried about me becoming a police officer initially. She tried to get me to look into a position at the post office and everything. My father was a stonemason, and my brother worked construction, so this was totally different.” Although Shawn met his wife at A&amp;T, they lost touch after he left. They reconnected in at the end of 2002 and were married in June of 2005. From the start of his journey, the love and support of his family are what has kept him going. “My wife and my daughters are everything to me. I am a man of faith, and it matters to have a praying wife to cover you every time you step out the door. In law enforcement, nine times out of ten, we see the worst of the worst. Death, tragedy, and people at their absolute worst and it’s hard. So, you have to have, in my opinion, a strong faith in God and the support of a loving family. Without those, I don’t think I would be sane.”

After completing the BLET, Shawn started his career as a law enforcement officer on the campus of A&amp;T State University in 1995. “I was grateful for my job at the mill, but I knew I had to do something to build a future for myself and my daughter. Taking the BLET was a step in the right direction,” Shawn explained. It’s been said that when you are on the right path for your life, you will find everything you need for the journey along the way. While working at A&amp;T State, Shawn first met his wife, Keffney, a student at the University at the time. Years later, they would meet again and marry, but she says she knew that he was her husband from the first moment they met. Once Shawn started in law enforcement, he knew that education was the way to move forward. While working at A&amp;T as a law enforcement officer, Shawn went to school at Guilford Technical Community College, where he earned his associate’s degree in Criminal Justice Security in 1998. He received his bachelor’s degree in Criminal Justice with a minor in Homeland Security from Liberty University in 2016, and his master’s in Criminal Justice with a minor in Homeland Security from Cumberland University, Kentucky, in 2018. “In high school, all I wanted to do was get out. When I worked at the mill, I learned that I wouldn’t get far with only a high school diploma. Once I started at A&amp;T, I set my sights on what would move me forward in my chosen career path… more education.” As Shawn continued to study, he took advantage of opportunities along his path. In 2000, Shawn left A&amp;T and started at the Thomasville Police Department in Thomasville, N.C. After a year there, Shawn went to the North Carolina Department of Motor Vehicles (DMV). In 2002, the law enforcement side of the NC DMV merged with the North Carolina State Highway Patrol. Shawn officially became a trooper in 2006.

Shawn and his family find themselves walking a fine line in the recent clash between civilians and law enforcement. It is hard to celebrate him as an officer when there seems to always be a negative connotation around that uniform. As a black male and a law enforcement officer, you would think he would struggle between the two worlds. Shawn’s perspective is this… “You have to know what you are out there for. My job is to serve the people, even those who don’t want me to. I still have to and want to help them. I treat every situation and individual with respect because that is what we all deserve. It can be difficult at times because I still have young daughters who hear negative things at school or in the neighborhood. That’s why we talk with our children and we communicate regularly. At the end of the day, the most important thing is that my children know who their father is and that I love them.” He also said his family can’t wear any paraphernalia outside of the home in fear of putting us in harm’s way. As Master Trooper Shawn Harvin walks his destiny path, he continues to honor God, himself, his family, and people have noticed. Shawn received the North Carolina 2021 State Trooper of the year award and has been featured on Fox 8 News “Highlighting Heroes.” Shawn works with several community service groups, including his church, True Salvation Christian Fellowship, and the Masons. He is a certified EMS for Guildford County, and he teaches law enforcement at several local community colleges. It’s clear that Shawn loves what he does, but he is realistic about the future. “I’m forty-nine years old, soon to be fifty. I know I won’t be able to do what I do and keep up this pace forever, but I will do whatever I can to make a difference while I can. When I retire, I will focus on my other passion, photography.” Like with every other thing Shawn puts his hands to, he is no slouch as a photographer either. His photos have been featured on the Food Network channel, Essence Magazine, and MunaLuci Bride Magazine. Some of his pictures will also be featured at Massanutten Ski Lodge Resort. “I want to build something for my daughters. Something they can be proud of and that will help carry them forward. Something that will help them as they discover their path to destiny.” h 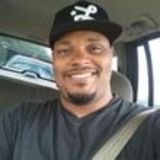