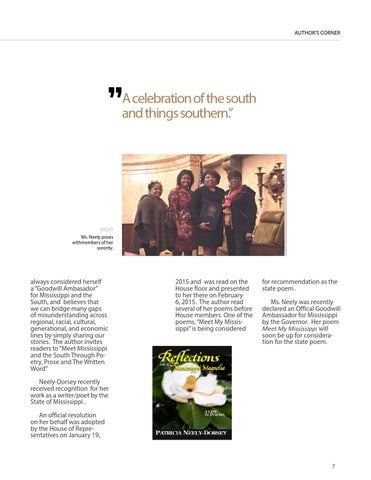 A celebration of the south and things southern.”

2015 and was read on the House floor and presented to her there on February 6, 2015. The author read several of her poems before House members. One of the poems, “Meet My Mississippi” is being considered

for recommendation as the state poem . Ms. Neely was recently declared an Offical Goodwill Ambassador for Mississippi by the Governor. Her poem Meet My Mississippi will soon be up for consideration for the state poem.

Neely-Dorsey recently received recognition for her work as a writer/poet by the State of Mississippi . An official resolution on her behalf was adopted by the House of Representatives on January 19,