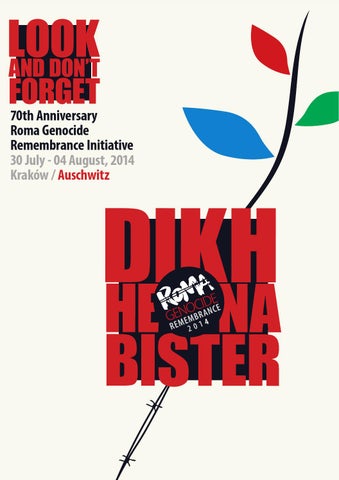 International Roma Youth Network ternYpe is a network of youth and youth associations, which creates space for young people to become active citizens through empowerment, mobilisation, self-organisation and participation. We believe in the common efforts by creating trust, and mutual respect between Roma and non-Roma youth.

Disclaimer: This publication is the responsibility of the authors and partner organisations, it does not represent the official point of view of the donor institutions. Donors:

Roma Genocide Remembrance Initiative According to the United Nations, the term genocide refers to â&#x20AC;&#x153;a denial of the right of existence of entire human groupsâ&#x20AC;&#x153;, aiming at complete extermination of such groups. The term Roma Genocide, then, refers to the mass extermination of Roma and Sinti throughout Europe which took place under the Nazi regime during World War II. ternYpe believes that youth plays an important role in the process of constructing tolerant and inclusive societies, based on deep understanding of the past. That is why we developed the Roma Genocide Remembrance Initiative, to build mutual trust, co-operation and solidarity among Roma and non-Roma youth, through analysis and interpretation of history as a tool, to evaluate and act in contemporary societies. Every year since 2010, around August 2 ternYpe brings together young Europeans of different backgrounds for the Roma Genocide Remembrance Initiative. In 2014 ternYpe and its over 60 partner organizations gathered 1.000 young Roma and non-Roma from all over Europe around August 2, marking the 70th anniversary of the Remembrance Day of the Roma Genocide. The initiative aimed at raising awareness among young Europeans, civil society and decision-makers about the Roma Genocide, as well as about the mechanisms of antigypsyism in a challenging context of rising racism, hate speech and extremism in Europe. With this initiative Roma youth advocates for the official recognition of 2 August as the Roma Genocide Remembrance Day to pay homage to the victims, heroes, survivors, and strengthen the identity based on the deep knowledge of the past. #2August www.2august.eu

High Patronage of the President of the European Parliament

â&#x20AC;&#x153;The work of your organisation and the purpose of your initiative, namely to raise awareness of the Roma genocide during the Holocaust, are much appreciated by the European Parliament. Atrocities such as the ones committed against the Roma population during WWII should never be allowed to happen again. That is why your committed work to keep the memory alive is so important. An official day of remembrance of the Roma Genocide will not undo the sufferings or bring back the victims of the Holocaust, but it can serve as a warning, a tribute and a lesson. Unfortunately, even today in a modern and free Europe, the Roma are still being subject to discrimination. One of the core values of the European Union is the principle of non-discrimination and it is our duty to ensure the respect of fundamental rights for all. The European Parliament is known for its dedication to promoting and defending human rights in Europe and all over the world, and its efforts to put an end to any form of social exclusion and discrimination affecting minority groups, including the Roma. It is therefore with great pleasure that I grant the European Parliamentâ&#x20AC;&#x2122;s high patronage to your initiative. Unfortunately, due to a prior engagement, I will be unable to attend your event in person. I hope you will accept my best wishes for the event and I am sure it will be a great success. Your sincerely, Martin Schulz

»The genocide of the Sinti and Roma was motivated by the same obsession with race, carried out with the same resolve and the same intent to achieve their methodical and final extermination as the genocide against the Jews. Throughout the National Socialists’ sphere of influence, the Sinti and Roma were murdered systematically, family by family, from the very young to the very old.« Federal President of Germany Roman Herzog 16 March 1997

Today, we are standing on the very ground, where so many of our loved ones were murdered. This pond is probably where my mother, sisters and brother are buried. I always come here. Listen how quiet and peaceful this place is. I still cannot comprehend that there is such quiet in the place where all these horrible things happened.

Victims of the Roma Genocide

It is difficult to state a specific number of Roma victims as many were murdered by mobile SS groups, on sight, or reached the gas chambers without ever being registered officially. Today most scholars agree that an estimated of at least 500.000 Roma were victims of the genocide, amounting to perhaps as much as 70-80% of the total Roma population in Europe at that time.

Given the Nazi ideology for “racial purity”, the Roma were among their first victims. On July 14, 1933 the Nazi Department of Racial Hygiene and Population Biology began to experiment on Roma to reach criteria for their racial classification, and it was determined that most Roma posed a danger to German “racial purity” and should be eliminated. The Nuremberg racial laws, which passed in 1935 and targeted the Jews directly, were extended to include “Gypsies, Negroes and their bastard offspring” in late 1935.

16 May - Romani Resistance Day The Nazis intended to exterminate the Roma completely as early as May 1944. On 16 May, 60 SS men surrounded the camp and attempted to force the prisoners out of the barracks, but failed to do so. Men, women and children got organized in order to fight off the SS guards who came that same night to kill them in the gas chambers. Fearing casualties, the Nazis withdrew in front of the Resistance. There were significant numbers of Wehrmacht veterans among the prisoners. Later that month over 1.800 Roma were transferred to the Buchenwald, Flossenburg and Ravensbr端ck camps; fewer than 3.000 people remained in Birkenau.

2 August - Remembrance Day The extermination of the Roma in Birkenau occurred on the night of August 2/3, 1944. A ban on leaving the barracks was imposed on the evening of August 2. Despite resistance by the Roma, 2.897 men, women, and children were loaded on trucks, taken to gas chamber V, and exterminated. Their bodies were burned in pits next to the crematorium.

Lack of Recognition Due to the lack of recognition of the fate of the Roma under the Nazi Regime, the Roma Genocide was often referred to as the “forgotten Holocaust” which seems still valid until today. As of the 60´s a number of Roma and Sinti organizations begun the plight to officially recognize the Roma Genocide. They mobilized attention through actions such as the demonstration at the former Bergen-Belsen concentration camp in 1979 or the hunger strike in 1980 at Dachau. It was not until 1982 that the government of West Germany officially recognized the Roma Genocide. In 2011 the Polish Parliament passed a resolution for the official recognition of August 2 as a remembrance day, which was followed in 2014 by Croatia. Recognition = Dignity, Identity and Justice Advocating for the official recognition of August 2 as the Roma Genocide Remembrance Day pays homage to the victims, heroes, survivors, and strengthens the identity based on the deep knowledge of the past. While recognizing the racial persecution of Roma under the Nazi regime, we need to acknowledge and address the fact that stereotypes and antigypsyism, mechanisms of exclusion, hate speech and hate crime, as well as the denial of the Holocaust are still widespread in Europe today. Recognition of the Roma Genocide is an important step in the restoration of dignity and justice for Roma, and in the respect of human rights in Europe nowadays.

ternYpe calls upon wide official recognition of the August 2 as the Roma Genocide Remembrance Day, and for education about history of persecutions of Roma and Sinti.

This initiative has been realized thanks to great dedication and determination of over 60 Roma and non-Roma youth organizations that participated in the event. Our greatest appreciation goes to all the 8 Romani survivors who spent 5 active days with over 1.000 young people from 25 countries. The event was an amazing educational experience thanks to the engagement of over 80 experts, researchers and activists from different countries specialized in the topics of Holocaust education, Roma Genocide, human rights and youth activism.

ternYpe aims to empower young Roma to have a voice to become key agents of change, and to foster solidarity among young people! We have a strong vision to make a change in Europe. As young Roma and non-Roma we believe that we can build European culture based on respect, dialogue, human rights and equal opportunities.

We strongly follow our mission to create space for young people to become active citizens through empowerment, mobilization, self-organization and participation. We advocate for a wider official recognition of the Roma Genocide in Europe and for the formal establishment of August 2nd as the Roma Genocide Remembrance Day.

“If the world does not change now, if the world does not open its doors and windows, if it does not build peace -- true peace -so that my great-grandchildren have a chance to live in this world, then I cannot explain why I survived Auschwitz, Bergen-Belsen, and Ravensbrück.’’ 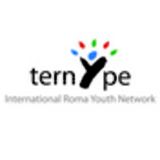 On occasion of the 70th anniversary of August 2, 2014, ternYpe International Roma Youth Network and its partners gathered over 1.000 young R...

On occasion of the 70th anniversary of August 2, 2014, ternYpe International Roma Youth Network and its partners gathered over 1.000 young R...