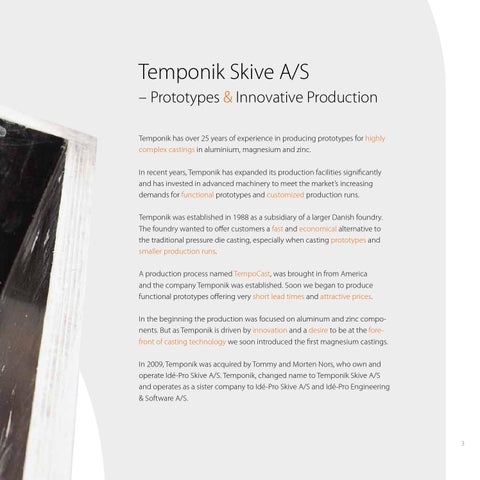 Temponik Skive A/S – Prototypes & Innovative Production Temponik has over 25 years of experience in producing prototypes for highly complex castings in aluminium, magnesium and zinc. In recent years, Temponik has expanded its production facilities significantly and has invested in advanced machinery to meet the market’s increasing demands for functional prototypes and customized production runs. Temponik was established in 1988 as a subsidiary of a larger Danish foundry. The foundry wanted to offer customers a fast and economical alternative to the traditional pressure die casting, especially when casting prototypes and smaller production runs. A production process named TempoCast, was brought in from America and the company Temponik was established. Soon we began to produce functional prototypes offering very short lead times and attractive prices. In the beginning the production was focused on aluminum and zinc components. But as Temponik is driven by innovation and a desire to be at the forefront of casting technology we soon introduced the first magnesium castings. In 2009, Temponik was acquired by Tommy and Morten Nors, who own and operate Idé-Pro Skive A/S. Temponik, changed name to Temponik Skive A/S and operates as a sister company to Idé-Pro Skive A/S and Idé-Pro Engineering & Software A/S. Presenting Temponik Skive A/S - a leading Danish manufacture of prototypes and products in aluminium, magnesium and zinc. Visit our websit...

Presenting Temponik Skive A/S - a leading Danish manufacture of prototypes and products in aluminium, magnesium and zinc. Visit our websit...