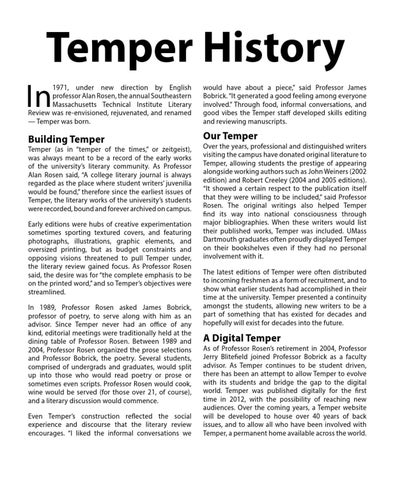 would have about a piece,” said Professor James Bobrick. “It generated a good feeling among everyone involved.” Through food, informal conversations, and good vibes the Temper staff developed skills editing and reviewing manuscripts.

Temper (as in “temper of the times,” or zeitgeist), was always meant to be a record of the early works of the university’s literary community. As Professor Alan Rosen said, “A college literary journal is always regarded as the place where student writers’ juvenilia would be found,” therefore since the earliest issues of Temper, the literary works of the university’s students were recorded, bound and forever archived on campus. Early editions were hubs of creative experimentation sometimes sporting textured covers, and featuring photographs, illustrations, graphic elements, and oversized printing, but as budget constraints and opposing visions threatened to pull Temper under, the literary review gained focus. As Professor Rosen said, the desire was for “the complete emphasis to be on the printed word,” and so Temper’s objectives were streamlined. In 1989, Professor Rosen asked James Bobrick, professor of poetry, to serve along with him as an advisor. Since Temper never had an office of any kind, editorial meetings were traditionally held at the dining table of Professor Rosen. Between 1989 and 2004, Professor Rosen organized the prose selections and Professor Bobrick, the poetry. Several students, comprised of undergrads and graduates, would split up into those who would read poetry or prose or sometimes even scripts. Professor Rosen would cook, wine would be served (for those over 21, of course), and a literary discussion would commence. Even Temper’s construction reflected the social experience and discourse that the literary review encourages. “I liked the informal conversations we

Over the years, professional and distinguished writers visiting the campus have donated original literature to Temper, allowing students the prestige of appearing alongside working authors such as John Weiners (2002 edition) and Robert Creeley (2004 and 2005 editions). “It showed a certain respect to the publication itself that they were willing to be included,” said Professor Rosen. The original writings also helped Temper find its way into national consciousness through major bibliographies. When these writers would list their published works, Temper was included. UMass Dartmouth graduates often proudly displayed Temper on their bookshelves even if they had no personal involvement with it. The latest editions of Temper were often distributed to incoming freshmen as a form of recruitment, and to show what earlier students had accomplished in their time at the university. Temper presented a continuity amongst the students, allowing new writers to be a part of something that has existed for decades and hopefully will exist for decades into the future.

As of Professor Rosen’s retirement in 2004, Professor Jerry Blitefield joined Professor Bobrick as a faculty advisor. As Temper continues to be student driven, there has been an attempt to allow Temper to evolve with its students and bridge the gap to the digital world. Temper was published digitally for the first time in 2012, with the possibility of reaching new audiences. Over the coming years, a Temper website will be developed to house over 40 years of back issues, and to allow all who have been involved with Temper, a permanent home available across the world.

The Temper Literary Review is a publication of the University of Massachusetts Dartmouth English department and publishes the writing of current students of the university.