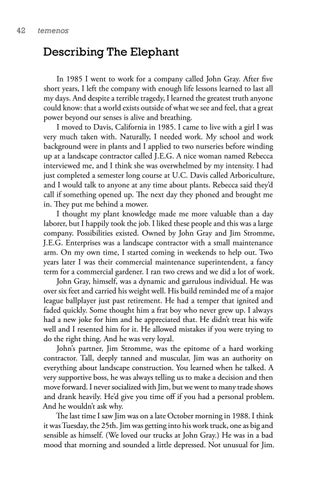 Describing The Elephant In 1985 I went to work for a company called John Gray. After five short years, I left the company with enough life lessons learned to last all my days. And despite a terrible tragedy, I learned the greatest truth anyone could know: that a world exists outside of what we see and feel, that a great power beyond our senses is alive and breathing. I moved to Davis, California in 1985. I came to live with a girl I was very much taken with. Naturally, I needed work. My school and work background were in plants and I applied to two nurseries before winding up at a landscape contractor called J.E.G. A nice woman named Rebecca interviewed me, and I think she was overwhelmed by my intensity. I had just completed a semester long course at U.C. Davis called Arboriculture, and I would talk to anyone at any time about plants. Rebecca said they’d call if something opened up. The next day they phoned and brought me in. They put me behind a mower. I thought my plant knowledge made me more valuable than a day laborer, but I happily took the job. I liked these people and this was a large company. Possibilities existed. Owned by John Gray and Jim Stromme, J.E.G. Enterprises was a landscape contractor with a small maintenance arm. On my own time, I started coming in weekends to help out. Two years later I was their commercial maintenance superintendent, a fancy term for a commercial gardener. I ran two crews and we did a lot of work. John Gray, himself, was a dynamic and garrulous individual. He was over six feet and carried his weight well. His build reminded me of a major league ballplayer just past retirement. He had a temper that ignited and faded quickly. Some thought him a frat boy who never grew up. I always had a new joke for him and he appreciated that. He didn’t treat his wife well and I resented him for it. He allowed mistakes if you were trying to do the right thing. And he was very loyal. John’s partner, Jim Stromme, was the epitome of a hard working contractor. Tall, deeply tanned and muscular, Jim was an authority on everything about landscape construction. You learned when he talked. A very supportive boss, he was always telling us to make a decision and then move forward. I never socialized with Jim, but we went to many trade shows and drank heavily. He’d give you time off if you had a personal problem. And he wouldn’t ask why. The last time I saw Jim was on a late October morning in 1988. I think it was Tuesday, the 25th. Jim was getting into his work truck, one as big and sensible as himself. (We loved our trucks at John Gray.) He was in a bad mood that morning and sounded a little depressed. Not unusual for Jim. 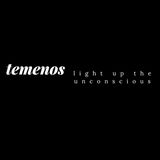