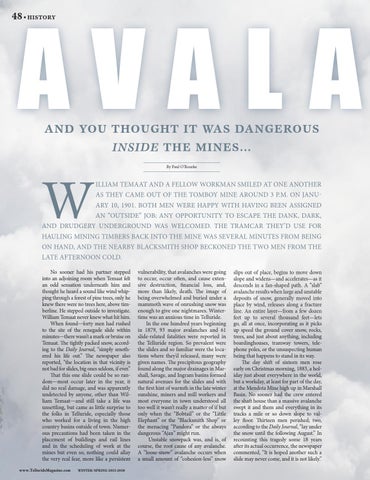 AND YOU THOUGHT IT WAS DANGEROUS INSIDE THE MINES…

ILLIAM TEMAAT AND A FELLOW WORKMAN SMILED AT ONE ANOTHER AS THEY CAME OUT OF THE TOMBOY MINE AROUND 3 P.M. ON JANUARY 10, 1901. BOTH MEN WERE HAPPY WITH HAVING BEEN ASSIGNED AN “OUTSIDE” JOB; ANY OPPORTUNITY TO ESCAPE THE DANK, DARK,

AND DRUDGERY UNDERGROUND WAS WELCOMED. THE TRAMCAR THEY’D USE FOR HAULING MINING TIMBERS BACK INTO THE MINE WAS SEVERAL MINUTES FROM BEING ON HAND, AND THE NEARBY BLACKSMITH SHOP BECKONED THE TWO MEN FROM THE LATE AFTERNOON COLD. No sooner had his partner stepped into an adjoining room when Temaat felt an odd sensation underneath him and thought he heard a sound like wind whipping through a forest of pine trees, only he knew there were no trees here, above timberline. He stepped outside to investigate. William Temaat never knew what hit him. When found—forty men had rushed to the site of the renegade slide within minutes—there wasn’t a mark or bruise on Temaat. The tightly packed snow, according to the Daily Journal, “simply smothered his life out.” The newspaper also reported, “the location in that vicinity is not bad for slides, big ones seldom, if ever.” That this one slide could be so random—most occur later in the year, it did no real damage, and was apparently undetected by anyone, other than William Temaat—and still take a life was unsettling, but came as little surprise to the folks in Telluride, especially those who worked for a living in the high country basins outside of town. Numerous precautions had been taken in the placement of buildings and rail lines and in the scheduling of work at the mines but even so, nothing could allay the very real fear, more like a persistent

vulnerability, that avalanches were going to occur, occur often, and cause extensive destruction, financial loss, and, more than likely, death. The image of being overwhelmed and buried under a mammoth wave of onrushing snow was enough to give one nightmares. Wintertime was an anxious time in Telluride. In the one hundred years beginning in 1879, 93 major avalanches and 61 slide-related fatalities were reported in the Telluride region. So prevalent were the slides and so familiar were the locations where they’d released, many were given names. The precipitous geography found along the major drainages in Marshall, Savage, and Ingram basins formed natural avenues for the slides and with the first hint of warmth in the late winter sunshine, miners and mill workers and most everyone in town understood all too well it wasn’t really a matter of if but only when the “Bobtail” or the “Little Elephant” or the “Blacksmith Shop” or the menacing “Pandora” or the always dangerous “Ajax” might run. Unstable snowpack was, and is, of course, the root cause of any avalanche. A “loose-snow” avalanche occurs when a small amount of “cohesion-less” snow

slips out of place, begins to move down slope and widens—and accelerates—as it descends in a fan-shaped path. A “slab” avalanche results when large and unstable deposits of snow, generally moved into place by wind, releases along a fracture line. An entire layer—from a few dozen feet up to several thousand feet—lets go, all at once, incorporating as it picks up speed the ground cover snow, rocks, trees, and just about anything, including boardinghouses, tramway towers, telephone poles, or the unsuspecting human being that happens to stand in its way. The day shift of sixteen men rose early on Christmas morning, 1883, a holiday just about everywhere in the world, but a workday, at least for part of the day, at the Mendota Mine high up in Marshall Basin. No sooner had the crew entered the shaft house than a massive avalanche swept it and them and everything in its tracks a mile or so down slope to valley floor. Thirteen men perished; two, according to the Daily Journal, “lay under the snow until the following August.” In recounting this tragedy some 18 years after its actual occurrence, the newspaper commented, “It is hoped another such a slide may never come, and it is not likely.”

Telluride Magazine's winter/spring issue features stories about being diagnosed with multiple sclerosis, the housing crisis, a family vacation to the fifth-highest peak in the world, confessions from a hockey mom, and fiction by Peter Heller.