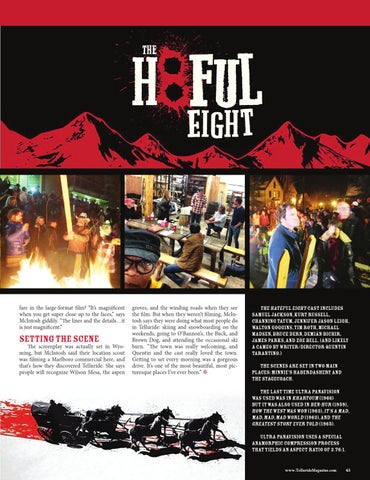 fare in the large-format film? “It’s magnificent when you get super close up to the faces,” says McIntosh giddily. “The lines and the details…it is just magnificent.”

The screenplay was actually set in Wyoming, but McIntosh said their location scout was filming a Marlboro commercial here, and that’s how they discovered Telluride. She says people will recognize Wilson Mesa, the aspen

groves, and the winding roads when they see the film. But when they weren’t filming, McIntosh says they were doing what most people do in Telluride: skiing and snowboarding on the weekends, going to O’Bannon’s, the Buck, and Brown Dog, and attending the occasional ski burn. “The town was really welcoming, and Quentin and the cast really loved the town. Getting to set every morning was a gorgeous drive. It’s one of the most beautiful, most picturesque places I’ve ever been.” \