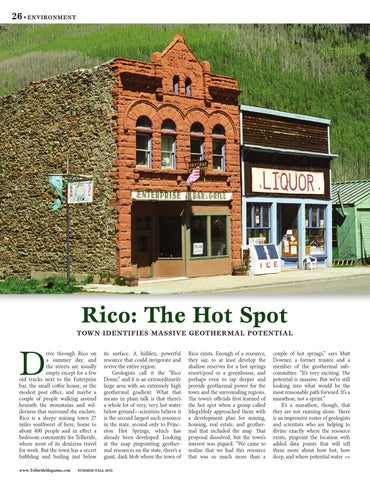 rive through Rico on a summer day, and the streets are usually empty except for a few old trucks next to the Enterprise bar, the small coffee house, or the modest post office, and maybe a couple of people walking around beneath the mountains and wilderness that surround the enclave. Rico is a sleepy mining town 27 miles southwest of here, home to about 400 people and in effect a bedroom community for Telluride, where most of its denizens travel for work. But the town has a secret bubbling and boiling just below www.TellurideMagazine.com

its surface. A hidden, powerful resource that could invigorate and revive the entire region. Geologists call it the “Rico Dome,” and it is an extraordinarily large area with an extremely high geothermal gradient. What that means in plain talk is that there’s a whole lot of very, very hot water below ground—scientists believe it is the second largest such resource in the state, second only to Princeton Hot Springs, which has already been developed. Looking at the map pinpointing geothermal resources on the state, there’s a giant, dark blob where the town of

Rico exists. Enough of a resource, they say, to at least develop the shallow reserves for a hot springs resort/pool or a greenhouse, and perhaps even to tap deeper and provide geothermal power for the town and the surrounding regions. The town’s officials first learned of the hot spot when a group called MegaMoly approached them with a development plan for mining, housing, real estate, and geothermal that included the map. That proposal dissolved, but the town’s interest was piqued. “We came to realize that we had this resource that was so much more than a

couple of hot springs,” says Matt Downer, a former trustee and a member of the geothermal subcommittee. “It’s very exciting. The potential is massive. But we’re still looking into what would be the most reasonable path forward. It’s a marathon, not a sprint.” It’s a marathon, though, that they are not running alone. There is an impressive roster of geologists and scientists who are helping to divine exactly where the resource exists, pinpoint the location with added data points that will tell them more about how hot, how deep, and where potential water »»