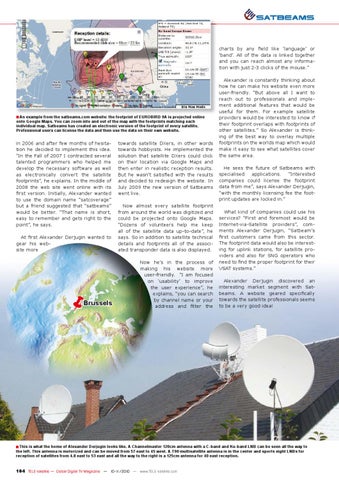 charts by any ﬁeld like ‘language’ or ‘band’. All of the data is linked together and you can reach almost any information with just 2-3 clicks of the mouse.”

■ An example from the satbeams.com website: the footprint of EUROBIRD 9A is projected online onto Google Maps. You can zoom into and out of the map with the footprints matching each individual map. Satbeams has created an electronic version of the footprint of every satellite. Professional users can license the data and then use the data on their own website.

in 2006 and after few months of hesitation he decided to implement this idea. “In the Fall of 2007 I contracted several talented programmers who helped me develop the necessary software as well as electronically convert the satellite footprints”, he explains. In the middle of 2008 the web site went online with its ﬁrst version. Initially, Alexander wanted to use the domain name “satcoverage” but a friend suggested that “satbeams” would be better. “That name is short, easy to remember and gets right to the point”, he says. At ﬁrst Alexander Derjugin wanted to gear his website more

towards satellite DXers, in other words towards hobbyists. He implemented the solution that satellite DXers could click on their location via Google Maps and then enter in realistic reception results. But he wasn’t satisﬁed with the results and decided to redesign the website. In July 2009 the new version of Satbeams went live. Now almost every satellite footprint from around the world was digitized and could be projected onto Google Maps. “Dozens of volunteers help me keep all of the satellite data up-to-date”, he says. So in addition to satellite technical details and footprints all of the associated transponder data is also displayed. Now he’s in the process of making his website more user-friendly. “I am focused on ‘usability’ to improve the user experience”, he explains, “you can search by channel name or your address and ﬁlter the

Alexander is constantly thinking about how he can make his website even more user-friendly. “But above all I want to reach out to professionals and implement additional features that would be useful for them. For example satellite providers would be interested to know if their footprint overlaps with footprints of other satellites.” So Alexander is thinking of the best way to overlay multiple footprints on the worlds map which would make it easy to see what satellites cover the same area. He sees the future of Satbeams with specialised applications. “Interested companies could license the footprint data from me”, says Alexander Derjugin, “with the monthly licensing fee the footprint updates are locked in.” What kind of companies could use his services? “First and foremost would be Internet-via-Satellite providers”, comments Alexander Derjugin, “Satbeam’s ﬁrst customers came from this sector. The footprint data would also be interesting for uplink stations, for satellite providers and also for SNG operators who need to ﬁnd the proper footprint for their VSAT systems.” Alexander Derjugin discovered an interesting market segment with Satbeams. A website geared speciﬁcally towards the satellite professionals seems to be a very good idea!

■ This is what the home of Alexander Derjugin looks like. A Channelmaster 120cm antenna with a C-band and Ku-band LNB can be seen all the way to the left. This antenna is motorized and can be moved from 57 east to 45 west. A T90 multisatellite antenna is in the center and sports eight LNBs for reception of satellites from 4.8 east to 53 east and all the way to the right is a 125cm antenna for 40 east reception.