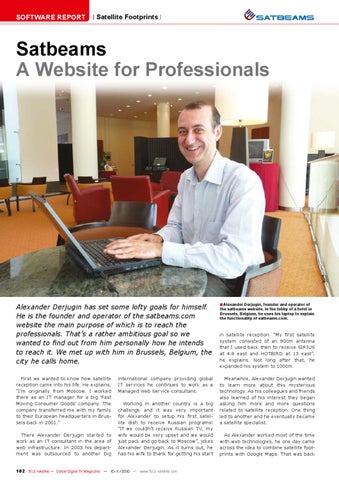 Alexander Derjugin has set some lofty goals for himself. He is the founder and operator of the satbeams.com website the main purpose of which is to reach the professionals. That’s a rather ambitious goal so we wanted to find out from him personally how he intends to reach it. We met up with him in Brussels, Belgium, the city he calls home. First we wanted to know how satellite reception came into his life. He explains, “I’m originally from Moscow. I worked there as an IT manager for a big ‘Fast Moving Consumer Goods’ company. The company transferred me with my family to their European headquarters in Brussels back in 2001.” There Alexander Derjugin started to work as an IT consultant in the area of web infrastructure. In 2003 his department was outsourced to another big

international company providing global IT services he continues to work as a Managed Web Service consultant. Working in another country is a big challenge and it was very important for Alexander to setup his first satellite dish to receive Russian programs! “If we couldn’t receive Russian TV, my wife would be very upset and we would just pack and go back to Moscow”, jokes Alexander Derjugin. As it turns out, he has his wife to thank for getting his start

■ Alexander Derjugin, founder and operator of

the satbeams website. In the lobby of a hotel in Brussels, Belgium, he uses his laptop to explain the functionality of satbeams.com.

in satellite reception. “My first satellite system consisted of an 80cm antenna that I used back then to receive SIRIUS at 4.8 east and HOTBIRD at 13 east”, he explains. Not long after that, he expanded his system to 100cm. Meanwhile, Alexander Derjugin wanted to learn more about this mysterious technology. As his colleagues and friends also learned of his interest they began asking him more and more questions related to satellite reception. One thing led to another and he eventually became a satellite specialist. As Alexander worked most of the time with web technologies, he one day came across the idea to combine satellite footprints with Google Maps. That was back