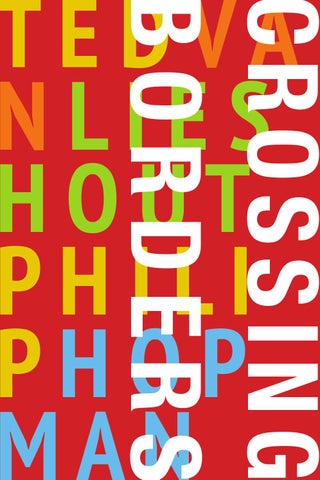 PHILIP H ‘In 1961 I was born in Egmond aan den Hoef. My father grew tulips with names like Arabian Mystery, Apricot Parrot and Lustige Witwe. I like tulips, but I found the work to be dull and dirty. I rather made drawings. Which is what I still do. ​ In 1980 I went to the Gerrit Rietveld Art School, where I was taught by, among others, Thé Tjong Khing. I moved to Amsterdam. My mother was afraid I would starve, because I couldn’t cook. But cooking is something you can learn, which I did, and so I am still alive. When I finished Art School I started to work as an illustrator, and now I have illustrated over 200 books, and one I wrote myself: ‘Valentijn en zijn viool’ (published in English as ‘Valentine and His Violin’). Read more about me: www.philiphopman.nl’

HOPMAN ‘In 1955 I was born in Eindhoven. My father built houses, bridges and towers. I like building, but only with words. I like to build stories and poems. And I draw pictures too. Not always; sometimes I ask some one else to do the pictures. Philip, for instance. I​ n 1975 I moved to Amsterdam and went to the Gerrit Rietveld Art School, and when I graduated I started to work as an illustrator and designer, and eventually as an author. Now I have written about 70 books. Many of them won awards, such as the Golden Slate Pencil and the Theo Thijssen Award. In 2014 and 2016 I was a finalist for the Hans Christian Andersen Award. Several books are translated into other languages, such as Danish, English, Estonian, French, German, Italian, Korean, Norwegian, Spanish, Swedish and Turkish. Read more about me: www.tedvanlieshout.com’

Philip and Ted perform in schools, libraries, shops and theatres all over the country as well as abroad. They perform on their own and also as a duo.

Philip lets children of the international school in Cairo draw on big pieces of paper. Ted tells children at the same school a story.

Ted gives drawing marathons: lessons in the art of drawing (20 to 90 minutes), like in this book store in Bogotรก. He also gives workshops for children and adults. He lets them write, draw and make plays. He also gives lectures, for instance on writing about difficult subjects for children. Installing exhibitions in schools is also a possibility. 8

Philip also gives workshops, for instance: drawing storyboards. Here he tells a story and illustrates it on the spot in a book store in Colombia. Not just the children listen to him. 10

Philip specializes in murals. Children can help him make one. This one can be found in Egypt.

This mural - here in progress - was made for the book fair of Bogotรก. Ted assisted.

Ted and Philip were invited to leave their tags in Bogotรก.

Children proudly showing the results of what Ted just taught them to draw.

Ted and Philip are well known in the Netherlands for their series of picture books about a five year old who runs a farm: Boer Boris. Teds writes the stories and Philip illustrates them. Over a 100.000 copies were sold in less than three years. Ted writes books for older children too, as well as for adults, including books about art. His poetry won many awards. He was a finalist for the Hans Christian Andersen Award in 2014 and 2016. Philip has illustrated close to 250 books. He has won the Silver Pencil. He also wrote a book himself: Valentijn en zijn viool. 27

Philip and Ted perform in schools in South Africa. Philip illustrates a bloody story a boy standing on a chair is telling; Ted tells a less bloody story to young adolescents.

Children and young adolescents in Bogotรก in the process of making pictural poetry in a workshop by Ted.

‘When, if ever, is Philip going to sign my book?’

This Colombian girl holds a pair of scissors for the very first time in her life in a workshop by Ted. 37

Ted and Philip are being welcomed in the South African village of Steinkopf by teenagers, dressed up as adults, dancing the Namibian Namastap. 38

The event takes place in the open air, while the sun is setting.

Philip leads a workshop in a Colombian art center. He works with local illustrators and drawing artists. Ted is welcomed by students at the University of Bogotรก, prior to a lecture on the importance of art for children. 43

Ted and Philip write and draw with children, here in Cairo. Of course thereâ&amp;#x20AC;&amp;#x2122;s always time to read a story or a poem. Afterwards children can ask questions, if they have any. 48

Children in a book store in Bogotรก.

At the end of their visit to the international school in Cairo, Mody and Mathijs returned the favour: Mody told a story about two ducks that came swimming all the way from the Netherlands and were turned into a writer and an illustrator by a teacher, and Mathijs made live illustrations, just as swiftly as he had seen Philip and Ted do it. 52

Together Ted and Philip work with all age groups, including adults. If necessary they devide groups among themselves. Because of their drawing skills, language barriers are usually not a big deal. Philip and Ted both speak Dutch, English and German, and Philip also speaks Italian and Spanish. And if language fails and there is no interpreter, drawing will do the trick! Philip and Ted were, together or apart, in: Accra (Ghana), Antwerp and Brussels (Belgium), Aruba and Curaรงao (Dutch Antilles), Beijing and Hongkong (China), Bergen, Oslo and the Lofoten (Norway), Berlin, Frankfurt, Gรถttingen, Cologne and Munich (Germany), Cairo (Egypt), Dubai (United Emirates), Geneva (Switzerland), Istanbul (Turkey), Paris (France), Bogotรก (Colombia), Singapore and in various cities and villages in South Africa. In the Netherlands Ted and Philip usually work via Stichting Schrijvers School Samenleving (www.sss.nl). This Foundation Writers School Society helps to bring writers and illustrators together with schools, libraries, shops and theatres: info@sss.nl Sometimes the Nederlands Letterenfonds (Dutch Foundation for Literature) can help to realise a visit abroad or subsidize translation of Dutch literature: post@letterenfonds.nl If you want Philip and Ted to come to your country, you can also contact them directly:

Farewell presents from a boy in Cairo and a girl in Istanbul. 54