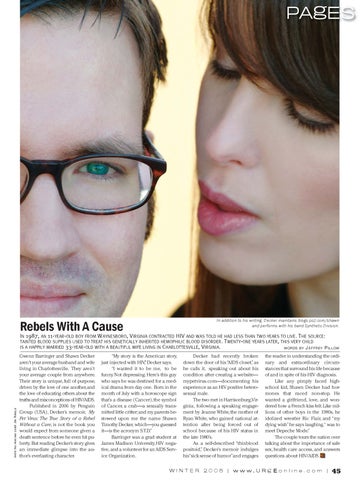 In addition to his writing, Decker maintains blogs.poz.com/shawn and performs with his band Synthetic Division.

Rebels With A Cause

IN 1987, AN 11-YEAR-OLD BOY FROM WAYNESBORO, VIRGINIA CONTRACTED HIV AND WAS TOLD HE HAD LESS THAN TWO YEARS TO LIVE. THE SOURCE: TAINTED BLOOD SUPPLIES USED TO TREAT HIS GENETICALLY INHERITED HEMOPHILIC BLOOD DISORDER. TWENTY-ONE YEARS LATER, THIS VERY CHILD IS A HAPPILY MARRIED 33-YEAR-OLD WITH A BEAUTIFUL WIFE LIVING IN CHARLOTTESVILLE, VIRGINIA. WORDS BY JEFFREY PILLOW Gwenn Barringer and Shawn Decker aren’t your average husband and wife living in Charlottesville. They aren’t your average couple from anywhere. Their story is unique, full of purpose, driven by the love of one another, and the love of educating others about the truths and misconceptions of HIV/AIDS. Published in 2006 by Penguin Group (USA), Decker’s memoir, My Pet Virus: The True Story of a Rebel Without a Cure, is not the book you would expect from someone given a death sentence before he even hit puberty. But reading Decker’s story gives an immediate glimpse into the author’s everlasting character.

“My story is the American story, just injected with HIV,” Decker says. “I wanted it to be me, to be funny. Not depressing. Here’s this guy who says he was destined for a medical drama from day one. Born in the month of July with a horoscope sign that’s a disease (Cancer), the symbol of Cancer, a crab—a sexually transmitted little critter; and my parents bestowed upon me the name Shawn Timothy Decker, which—you guessed it—is the acronym S.T.D.” Barringer was a grad student at James Madison University, HIV negative, and a volunteer for an AIDS Service Organization.

Decker had recently broken down the door of his “AIDS closet,” as he calls it, speaking out about his condition after creating a website— mypetvirus.com—documenting his experience as an HIV positive heterosexual male. The two met in Harrisonburg,Virginia, following a speaking engagement by Jeanne White, the mother of Ryan White, who gained national attention after being forced out of school because of his HIV status in the late 1980’s. As a self-described “thinblood positoid,” Decker’s memoir indulges his “sick sense of humor” and engages

the reader in understanding the ordinary and extraordinary circumstances that surround his life because of and in spite of his HIV diagnosis. Like any pimply faced highschool kid, Shawn Decker had hormones that raced non-stop. He wanted a girlfriend, love, and wondered how a French kiss felt. Like millions of other boys in the 1980s, he idolized wrestler Ric Flair, and “my dying wish” he says laughing,“ was to meet Depeche Mode.” The couple tours the nation over talking about the importance of safe sex, health care access, and answers questions about HIV/AIDS. g 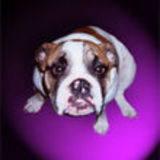