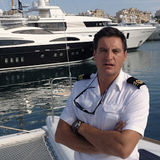 What is a Ship Captain? A ship captain is the leader of an entire vessel, which can range in size from a small yacht to an entire cruise liner. He or she has vast experience with ships and their operation, and has likely worked their way through the ranks of other ship-related positions. Duties on the ship fall far beyond the scope of a management position, as the ship captain must be proficient in every aspect of running a ship, from ship operation to maintenance, and in the instance of touring ships, playing host to the passengers. The entire success of a ship's voyage lies on the captain's shoulders and how well he or she manages the crew.