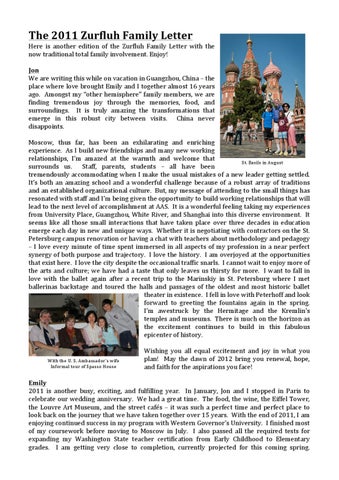 The 2011 Zurfluh Family Letter Here is another edition of the Zurfluh Family Letter with the now traditional total family involvement. Enjoy! Jon We are writing this while on vacation in Guangzhou, China – the place where love brought Emily and I together almost 16 years ago. Amongst my “other hemisphere” family members, we are finding tremendous joy through the memories, food, and surroundings. It is truly amazing the transformations that emerge in this robust city between visits. China never disappoints. Moscow, thus far, has been an exhilarating and enriching experience. As I build new friendships and many new working relationships, I’m amazed at the warmth and welcome that St. Basils in August surrounds us. Staff, parents, students – all have been tremendously accommodating when I make the usual mistakes of a new leader getting settled. It’s both an amazing school and a wonderful challenge because of a robust array of traditions and an established organizational culture. But, my message of attending to the small things has resonated with staff and I’m being given the opportunity to build working relationships that will lead to the next level of accomplishment at AAS. It is a wonderful feeling taking my experiences from University Place, Guangzhou, White River, and Shanghai into this diverse environment. It seems like all those small interactions that have taken place over three decades in education emerge each day in new and unique ways. Whether it is negotiating with contractors on the St. Petersburg campus renovation or having a chat with teachers about methodology and pedagogy – I love every minute of time spent immersed in all aspects of my profession in a near perfect synergy of both purpose and trajectory. I love the history. I am overjoyed at the opportunities that exist here. I love the city despite the occasional traffic snarls. I cannot wait to enjoy more of the arts and culture; we have had a taste that only leaves us thirsty for more. I want to fall in love with the ballet again after a recent trip to the Marinskiy in St. Petersburg where I met ballerinas backstage and toured the halls and passages of the oldest and most historic ballet theater in existence. I fell in love with Peterhoff and look forward to greeting the fountains again in the spring. I’m awestruck by the Hermitage and the Kremlin’s temples and museums. There is much on the horizon as the excitement continues to build in this fabulous epicenter of history. Wishing you all equal excitement and joy in what you plan! May the dawn of 2012 bring you renewal, hope, With the U. S. Ambassador&#39;s wife Informal tour of Spasso House and faith for the aspirations you face! Emily 2011 is another busy, exciting, and fulfilling year. In January, Jon and I stopped in Paris to celebrate our wedding anniversary. We had a great time. The food, the wine, the Eiffel Tower, the Louvre Art Museum, and the street cafés – it was such a perfect time and perfect place to look back on the journey that we have taken together over 15 years. With the end of 2011, I am enjoying continued success in my program with Western Governor’s University. I finished most of my coursework before moving to Moscow in July. I also passed all the required tests for expanding my Washington State teacher certification from Early Childhood to Elementary grades. I am getting very close to completion, currently projected for this coming spring.

Moving to Moscow in July marked another beginning of a new chapter in our lives. We really enjoy our new home, new school, and the new friends that we made. Jaisen and Erin did amazingly well settling into the new environment. I, for the first time, experience the struggle of living in a foreign country with a language that I don’t understand. Thank goodness for all the support I have received from new friends, school staff, Google Translate, and my iPhone. I managed to find most of what we need to live and work in a new and sometimes challenging city. During Christmas break, we stopped in Shanghai before flying to Guangzhou to spend time with my family. It was nice to see some of the familiar places and meet up with old friends. It brought back many fond memories of our many experiences in this exciting city. Times spent in Guangzhou with my family made me realize how much I have missed them (of course, I also missed my mom’s homemade soup and the Cantonese food, too) and how blessed and fortunate that I am to be able to spend more time with them. Hoping this greeting finds you surrounded by family, friends, love, health, and peace! Jaisen 2011 has been an amazing, and eventful year! In January, my classmates at Drum Intermediate School and I returned from winter break to continue the school year in 2011. School got harder, but I managed to keep about an “A-­‐“ average. I also started my second year in Lacrosse. I primarily played Middie on the second line of the team, so I got to see quite a bit of playtime with substitutions. That continued from February until about May. When the last day of school arrived, I knew I would miss all of my friends at Drum deeply, and I still do. I wish I could have had more time with all of them, but I hung out with many during the early part of summer. My summer was filled with parties, playing football (soccer), and various activities, in both Washington and Moscow. I also practiced with my original football team until the day I left Washington for my new home in Moscow, Russia. We arrived in Moscow on July 9th and got to our house. It was summer and it was boiling hot. The air conditioning in our house was turned up all the way and had only moderate effect. We unpacked and settled in a few short days. I made new friends much quicker than I thought I would. I played football and hung out with them during the last bit of summer. Then school started, and it has been a bit challenging. Despite that, I am holding a “B” average in most classes. I’ve made many new friends since the beginning of the school year. Now, with half the year gone, I really feel like I am having a great time. I made the CEESA Football team, the top football team of the middle school, which consists of 15 boys. We traveled to Budapest, Hungary and placed fifth in an Eastern European tournament. I am currently trying out for the CEESA Basketball team and I am hoping to go to Helsinki or Bucharest, depending on how the teams end up forming. Wish me luck and have a great New Year! -­‐-­‐Jaisen Erin So much has filled this year such as taking risks and leaving friends and family. While it has been challenging, I would like to tell you all about 2011. In January, it was a blast to finally start 2011 and to celebrate it with friends and family. On New Year’s Eve, we stayed up until midnight having fun but we did not care because we were together. I could not wait until the school year was over but I worried about how I was going to do on the MSP (Measurement of Student Progress). When it was almost time for it, I was nervous because I did

not know if I was going to do well or not. Shortly after this we found out about the traveling side of the story. Our dad told us that we were moving to Moscow, Russia! I was a little bit excited but how was I going to tell my friends? How would they take it? When my friends found out, they were amazed and surprised. But, I also noticed that they were a bit mad at me. On the last day of school, the madness changed to sadness and tears, but it was still fun to spend the last few hours with my good friends. Now that we are in Erin&#39;s debut as TweedleDee in Alice in Wonderland Moscow, it has been a blast! I have made friends with about 50 girls in the 5th grade and I am fitting in wonderfully. I like Moscow because there is lots of history to learn. At school, we have students from many different countries. We celebrate different cultures around the world. However, in Moscow, there are also many smokers and I am bothered by the smell a bit. With an international school comes the occasional changes and one of my new best friends that I have only known for about 4 months just left for Thailand . I’m super sad, but I know that we will always be friends even though we’re too far apart, just like all my friends back in Washington and Shanghai. Wherever you are, I hope you have a great year!! I love that we are getting back to an even number! :p -­‐-­‐Erin

The Archangel’s Cathedral at the Kremlin

Our annual letter for general publication.