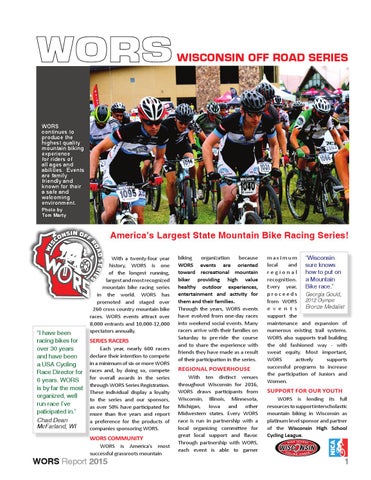 WORS continues to produce the highest quality mountain biking experience for riders of all ages and abilities. Events are family friendly and known for their a safe and welcoming environment. Photo by Tom Marty

“I have been racing bikes for over 30 years and have been a USA Cycling Race Director for 6 years. WORS is by far the most organized, well run race I’ve paticipated in.” Chad Dean McFarland, WI

With a twenty-four year history, WORS is one of the longest running, largest and most recognized mountain bike racing series in the world. WORS has promoted and staged over 260 cross country mountain bike races. WORS events attract over 8,000 entrants and 10,000-12,000 spectators annually.

SERIES RACERS Each year, nearly 600 racers declare their intention to compete in a minimum of six or more WORS races and, by doing so, compete for overall awards in the series through WORS Series Registration. These individual display a loyalty to the series and our sponsors, as over 50% have participated for more than five years and report a preference for the products of companies sponsoring WORS.

biking organization because WORS events are oriented toward recreational mountain biker providing high value healthy outdoor experiences, entertainment and activity for them and their families. Through the years, WORS events have evolved from one-day races into weekend social events. Many racers arrive with their families on Saturday to pre-ride the course and to share the experience with friends they have made as a result of their participation in the series.

Regional Powerhouse With ten distinct venues throughout Wisconsin for 2016, WORS draws participants from Wisconsin, Illinois, Minnesota, Michigan, Iowa and other Midwestern states. Every WORS race is run in partnership with a local organizing committee for great local support and flavor. Through partnership with WORS, each event is able to garner

Support for our youth WORS is lending its full resources to support interscholastic mountain biking in Wisconsin as platinum level sponsor and partner of the Wisconsin High School Cycling League.

“Mountain bike racing, especially WORS racing, is not just for the highly trained and talented. It is a great physical activity that can add to your health and quality of life. WORS is as much about fun, shared experiences and making new friends as it is about the racing. WORS is open to all and welcomes new female and male participants of all ages and athletic abilities.” From the WORS Mission Statement

WORS by the numbers Our focus on amateur excellence

Sport and Citizen categories at WORS are designed for recreational enthusiasts and entry level cyclists. Our lasting commitment at WORS is to provide safe, fun, highly-organized competition for racers at every level. At WORS, our commitment to amateur racing is founded on our passion

to share a great experience of mountain bike racing with as many people as possible. This passion has helped WORS to become America’s largest, and one of the world’s most long-running mountain bike racing series. By never losing sight of the importance of high-quality amateur competition, WORS has created a unique opportunity for our sponsors to reach beyond the more specialized demographic of other racing series.

The vast majority of WORS racers make their bike and accessories purchases through their local bike shop, at retail prices. Many will decide to buy a new bike or make accessories decisions based on the opinions and advice of fellow WORS racers. Product demos at WORS events are highly successful in driving business to highlighted products and programs.

Our Foundation of Greatness

WORS has found great companies to partner with. Their support and WORS work for them is the foundation of our success.

Wisconsin-based, Trek Bicycle Corporation is one of the worldâ&#x20AC;&#x2122;s largest - and best - bicycle companies. The Trek Superfly is the Official Bike of WORS, and Trek the presenting sponsor of the WORS and the WORS Cup.

Love, itâ&#x20AC;&#x2122;s what makes a Subaru, a Subaru. WORS loves Subaru and works hard to makes sure those who attend our events know it. Subaru is the official vehicle of WORS.

Sport Series Sponsor - Hayes Components is based in Wisconsin

and consist of the Answer, Manitou, Sun Ringle, Hayes Brake, and Wheelsmith brands.

The exclusive wheel and tire of WORS and the presenting sponsor of the WORS Cup Short Track.

ONE FOR ALL - Higher durability, pin power, and shifting performance. KMC is the title sponsor of the King of the Mountain Challenge events held at select WORS races and is the official exclusive chain of WORS.

WORS and WORS Racers Love Our Sponsors! Because of WORS highly social nature, participants are influenced and influence others when it comes to purchasing decisions. WORS racers demonstrate familiarity with and positive feelings toward WORS sponsors and their products. They are also likely to share their preferences with and influence the purchases of others.

as it has for most all of its twenty-four years, continues to evolve in 2016. The schedule, dominated by proven favorites and growing new comers, displays some variation of placement with many events returning on their traditional weekends. The WORS Cup continues on the top tier national calendar as a Pro XCT in late July and will be feature onsite camping this year to add to its festival atmosphere. From series opener to our 2016 finale, we will be working hard to produce high quality mountain bike experiences for our participants and the best possible exposure and return on investment for our sponsors.