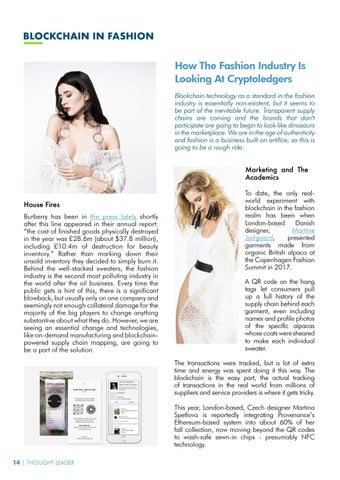 How The Fashion Industry Is Looking At Cryptoledgers Blockchain technology as a standard in the fashion industry is essentially non-existent, but it seems to be part of the inevitable future. Transparent supply chains are coming and the brands that don’t participate are going to begin to look like dinosaurs in the marketplace. We are in the age of authenticity and fashion is a business built on artifice, so this is going to be a rough ride. Marketing and The Academics

House Fires Burberry has been in the press lately shortly after this line appeared in their annual report: “the cost of finished goods physically destroyed in the year was £28.6m (about $37.8 million), including £10.4m of destruction for beauty inventory.” Rather than marking down their unsold inventory they decided to simply burn it. Behind the well-stacked sweaters, the fashion industry is the second most polluting industry in the world after the oil business. Every time the public gets a hint of this, there is a significant blowback, but usually only on one company and seemingly not enough collateral damage for the majority of the big players to change anything substantive about what they do. However, we are seeing an essential change and technologies, like on-demand manufacturing and blockchainpowered supply chain mapping, are going to be a part of the solution.

To date, the only realworld experiment with blockchain in the fashion realm has been when London-based Danish designer, Martine Jarlgaard, presented garments made from organic British alpaca at the Copenhagen Fashion Summit in 2017. A QR code on the hang tags let consumers pull up a full history of the supply chain behind each garment, even including names and profile photos of the specific alpacas whose coats were sheared to make each individual sweater. The transactions were tracked, but a lot of extra time and energy was spent doing it this way. The blockchain is the easy part, the actual tracking of transactions in the real world from millions of suppliers and service providers is where it gets tricky. This year, London-based, Czech designer Martina Spetlova is reportedly integrating Provenance’s Ethereum-based system into about 60% of her fall collection, now moving beyond the QR codes to wash-safe sewn-in chips - presumably NFC technology.

Payments & Cards Magazine Volume 4 - Issue 5 explores Blockchain & Cryptocurrency and it's effect on the future of payments and technology. This issue includes articles from companies such as BitSpace, Kinesis, Blockchain at Berkeley, Blockdata and B9lab. 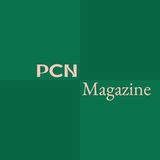