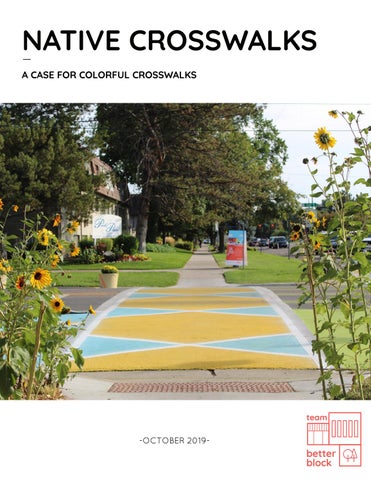 THE GREAT CROSSWALK DEBATE Bigger than all the national, state and local parks combined, streets are the largest public space in the United States. Not only are they the largest public space, but they are also one of the most dangerous spaces for people, as the number of pedestrian fatalities due to being struck by a car is increasing every year. A report released by the Governors Highway Safety Association (Retting) shows that the number of pedestrians killed in traffic jumped 11% in 2016, to almost 6,000. This was the biggest single-year increase in pedestrian fatalities ever, as well as the highest number of pedestrian deaths in more than 20 years. Street designers have a natural tension: design for function and logic vs. design to create opportunities for economic and equitable growth. Crosswalks often come up on both sides of that argument. Crosswalks are essential to pedestrian safety on streets. Landscape architects want to use them to bind the street, parkway and sidewalk to the adjacent buildings to create a rhythm and flow that creates a visual experience. Artists want to use them as a canvas to display local culture and pride. Americans with Disabilities Act (ADA) advocates want to make them easier to find and cross without steep drops for wheelchairs and canes catching on uplifted pavers. People want to be able to wear high heels without the fear of tripping, and seniors want a seamless way to cross the street without the fear of falling. The Federal Highway Administration, which is the only organization producing rulings on the issue, suggests keeping crosswalks uniform, and that based on a 1972 study, they can cause a false sense of security for pedestrians. Much of the arguments for and against colorful crosswalks are based on theory. Only recently have people in cities started testing what modern crosswalks can look like. There is no other lab in the United States for testing improvements to the crosswalk other than those cities that are brave enough to use their own discretion. Experimentation should be brought into the discussion on how to provide a safe street that also meets the demands of the growing population moving back into cities and wishing to reclaim public space. After eight years of testing a variety of crosswalk types, Team Better Block can offer the following conclusions:

Crosswalks are not going to single-handedly transform your city. Lane widths, horizontal deflection (bulb-outs), medians, art, culture, trees, human scale, and the list goes on... should also be considered.

Crosswalks are the perfect place for the community to begin to take ownership of streets.

Start by testing temporary materials, then record data from the transformation.

Donâ&#x20AC;&#x2122;t implement rogue crosswalks strictly for the reasons listed above. Make it part of a concerted effort. 1

WHAT MAKES A GOOD CROSSWALK? Poor examples of crosswalks can be found in every city. Most are accepted because they are muted and bring little attention to crossings.

Engineers focus almost entirely on visibility or retroreflective properties. “The FHWA’s position has always been, and continues to be that subdued-colored aesthetic treatments between the legally marked transverse crosswalk lines are permissible provided that they are devoid of retroreflective properties and that they do not diminish the effectiveness of the legally required white transverse pavement markings used to establish the crosswalk.”

Fig. 1 Gray pavers do not provide the contrast crucial for people with low vision, and do not alert drivers to slow down. Here, no white reflective markings are used, so at night, this crosswalk is virtually undetectable. (Image from Willamette Graystone)

Fig. 2 This is allowed, but the faded tones reduce visibility and uneven surface can prove hazardous.

Fig. 3 A textured edge creates a boundary without creating an uneven walking surface. (Image from the American Concrete Pavement Association)

“Examples of acceptable treatments include brick lattice patterns, paving bricks, paving stones, setts, cobbles, or other resources designed to simulate such paving. Acceptable colors for these materials would be red, rust, brown, burgundy, clay, tan or similar earth tone equivalents. All elements of pattern and color for these treatments are to be uniform, consistent, repetitive, and expected so as not to be a source of distraction. No element of the aesthetic interior treatment is to be random or unsystematic. No element of the aesthetic interior treatment can implement pictographs, symbols, multiple color arrangements, etc., or can otherwise attempt to communicate with any roadway user.” This standard limits personality or identity in crosswalks and has led to the the creation of subdued, boring and low-visibility crosswalks nationwide (Fig. 1). The variety of material types create alerting sounds when cars roll over them, but when it comes to their intended users– pedestrians–trying to roll over them in a wheelchair, using a cane, or walking in high heels, the rough texture can be hazardous (Fig. 2). A few designers have heard the pleas of marginalized groups and moved the texture to the edges of the crosswalk, thus framing the space and leaving at least four feet of smooth, walkable space (Fig. 3). Edges with texture help visually impaired individuals maintain their course and satisfy some aesthetic properties many communities are looking for. Crosswalks must be visible for oncoming drivers. Contrast is a fundamental principle of design that should be measured with the guidance provided. Fig. 4 demonstrates acceptable levels of contrast. Fig. 4 The figure at left provides a visual comparison of the different acceptable styles of painted crosswalk per the MUTCD. With fresh white, reflective paint, these crosswalks are visible, but why would pops of color make this any less the case?

“In 2011, the FHWA issued an additional Official Ruling that crosswalk art—defined as any freeform design to draw attention to the crosswalk—would degrade the contrast of the white transverse lines against the composition of the pavement beneath it. In deviating from previous Official Rulings on the matter that concluded an increased factor of safety and decreased number of pedestrian deaths were not evident after installation, this 2011 Official Ruling stated that the use of crosswalk art is actually contrary to the goal of increased safety and most likely could be a contributing factor to a false sense of security for both motorists and pedestrians.” The research concluding that markings make crosswalks less safe actually comes from a flawed report that has been refuted by many Professional Engineers including Bill Schulthiess, member of the National Committee on Uniform Traffic Control Devices and even contrary to several FHWA reports. “In 1972, a researcher named Bruce Herms conducted a study of crosswalk safety in San Diego. He found that intersections with marked crosswalks had higher injury rates than ones with unmarked crosswalks. He concluded that marked crosswalks should only be installed where they are “warranted” because they can give pedestrians a “false sense of security,” encouraging risky behavior.” What is acceptable contrast in a crosswalk? As former U.S. Supreme Court Justice Potter Stewart said, “I know it when I see it.” We can certainly do better for contrasting crosswalks than gray concrete pavers. Des Moines, Iowa (Fig. 5) is a good case study of how the current rigidity of the Fig. 6 This image demonstrates how existing MUTCD-compliant engineering profession can be crosswalks can be enhanced worked around. Per a rumor, through the addition of color. with political pressure to add artistic crosswalks, city leaders subverted the engineering department and installed the pictured crosswalk art without engineering review. Fig. 6 shows how the existing MUTCD acceptable crosswalk patterns could be enhanced to add color and character.

BETTER CROSSWALKS How do we allow local engineers and professionals to make good judgement calls on crosswalk proposals? We need data. And without the availability of a national lab to test street marking improvements focused on placemaking, art, and culture, our cities are the only space left. Better Block has been testing street treatments, including colorful crosswalks, for the past eight years and is now looking for best practice information from these tests. Cities can test street markings today using temporary materials like finger paint (tempera) or use traditional markings on low volume streets or in parking lots. City traffic engineering departments can work with local designers and volunteers to test an artistic crosswalk and evaluate how it improves pedestrian safety. Through a test, you will know when you see it if it is a good crosswalk or not. Examples of past Team Better Block colorful crosswalk interventions include:

Des Moines, Iowa - A modified continental crosswalk can be achieved by painting between the white stripes.

Fort Wayne, Indiana - Extending trails and plaza colors into a ladder crosswalk ties the travel lanes (center) with the edges of the street.

Buffalo, New York - A modified ladder crosswalk used stencils of fruit to carry the neighborhood identity from park to school.

Fort Worth, Texas - Stencils on top of a Continental crosswalk can add neighborhood identity to the standard design.

Fort Worth, Texas - A modified transverse crosswalk is completed with symbols from the neighborhood.

Pittsfield, Massachussetts - A transverse crosswalk with purple and polka dots created am extension of a trail.

Greensboro, North Carolina - The continental stripes are replaced with jeans to emulate the character of Greensboro as home to Wrangler jeans. This could have been improved even further with transverse lines.

ADDITIONAL CONSIDERATIONS Finally, consideration should be taken for northern cities where snow plows are frequently used in winter months. Cities need to think about materials and how to maintain this new infrastructure. Street marking budgets are always tight, so taking streets and adding more burden will not always be looked at favorably. A few examples exists of how to maintain such infrastructure: - Intersection Repair – Portland, Oregon (Fig. 7) – Annually, volunteers buy and paint intersections as part of a street celebration. - Indianapolis Cultural Trail – Indianapolis, Indiana (Fig. 8) – Museums, art galleries and business improvement districts contribute to funding maintenance on an in-street trail system that requires special crosswalk painting. - Neighborly- Nationwide – New mini-bond programs are opening up financing mechanisms for towns, cities and neighborhoods to fund small projects.

THE FUTURE OF ROADWAY ENGINEERING The MUTCD supports local engineers testing devices. “Section 1A.09 of the General provisions, states the decision to use a particular device at a particular location should be made on the basis of either an engineering study or the application of engineering judgment. Thus, while this Manual provides Standards, Guidance, and Options for design and applications of traffic control devices, this Manual should not be considered a substitute for engineering judgment. Engineering judgment should be exercised in the selection and application of traffic control devices, as well as in the location and design of roads and streets that the devices complement.” Too often, Engineers believe the MUTCD to be law, but it is not. A growing number of cities are testing how to incorporate new travel modes and devices into the public right of way. In some cases, cities are subverting from the engineering process and directing projects to move forward without engineering review (Des Moines, Iowa and Ames, Iowa colorful crosswalk projects are great cases to reference). Is this the future of the engineering profession? These and other cities are saying that rigid engineering principles should not be the dominating force in the future of their city’s design. Engineers should be part of the design conversation, but the rules and regulations associated with the principles of civil engineering should ultimately not have the last say in a design decision. Collaboration should take place amongst engineers, designers, and city officials in order to create safe, functional, but still visually pleasant new street strategies and devices. Join the list of cities and engineers seeking to test the future of mobility. 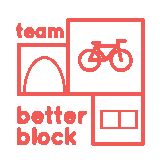 Native Crosswalks: The Case for Colorful Crosswalks, examines the current state of practice, recent experiments, and the path forward in fin...

Native Crosswalks: The Case for Colorful Crosswalks, examines the current state of practice, recent experiments, and the path forward in fin...