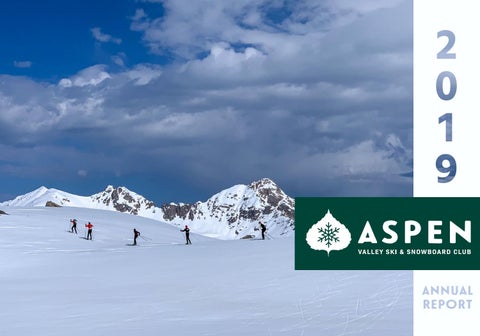 Not only did AVSC make me a great athlete, it molded me into a great human being. The building itself along with the staff acted as a vehicle for me to attain my dreams and now I get the chance to watch kids reach for theirs. It has really come full circle and AVSC is truly the gift that keeps on giving. I am grateful and honored to still be involved with the club and hope to be for the rest of my life. Alex Ferreira AVSC Alumnus AVSC Board Member US Ski Team Member Alex celebrates winning Halfpipe at X Games Aspen, January 2019.

Aspen Valley Ski & Snowboard Clubâ&#x20AC;&#x2122;s mission is to provide all youth in the greater Roaring Fork Valley the opportunity to excel as athletes and as people through winter sports. ANNUAL REPORT | 2019

Where do AVSC participants live?

Other: 112 (some AVSC athletes come from far afield, whether driving up from the Front Range or moving from New Zealand!)

Did you know? AVSC provides free transportation for 408 kids on 9 buses for our recreational programs. Buses travel from as far as Glenwood Springs to deliver Aspen Supports Kids skiers to and from Buttermilk and Snowmass and Bill Koch Youth Ski League participants take the bus from the Third Street Center in Carbondale to Spring Gulch (pictured). ANNUAL REPORT | 2019

$2.3 million raised annually to reduce the cost of our programs, thanks to the generous support of our donors.

Nancy Oakes Hall Scholarships for Female Athletes This year, many female athletes received financial support in their summer skiing pursuits through the Nancy Oakes Hall Scholarship. Nancy (pictured left) grew up in Aspen, where she ski raced and eventually coached for Aspen Valley Ski & Snowboard Club. She was well known for her athleticism, kindness and generosity. This year, the custodians of the Nancy Oakes Hall Memorial Fund granted AVSC an additional $25,000, on top of an existing scholarship for high-level AVSC athletes, to award to female athletes and staff to help them progress in their sport over the summer. Twenty four scholarships were awarded, ranging from camp costs for two Alpine ski racers to travel to Norway; to seven Nordic skiers for a conditioning camp in Bend, Oregon; to two coaches earning professional certifications.

We are so lucky to have an opportunity like this. It opens so many doors for the girls â&#x20AC;&#x201D; it allowed some of the fastest girls in the club to get unparalleled on-snow summer training in an amazing place. While in Norway, we skied 11 days on a perfect training hill, starting with fundamentals and progressing into full length timed training. This will have a huge impact on their competitive season. Beyond the skiing, they gained a lot from the cultural aspect of the trip. â&#x20AC;&#x201C; Coach Gill Hearn, a Nancy Oakes Hall Scholarship Recipient herself, speaking of the impact on her athletes.

The Roaring Fork Winter Sports Club, which had already changed its name to the Aspen Ski Club, made its first home in an old miner’s cabin on South Monarch Street in 1938.

The Aspen Ski Club became an official nonprofit organization in 1965, and began a focused campaign to raise money to offset the increasing costs of winter sports for participants. Volunteers served as coaches in the 1960s.

AVSC reunited the Nordic and Alpine programs under one roof. Previously, the City of Aspen administered the Nordic program through the Recreational Department.

Thanks to a generous gift of land from Carolyn and Tom Moore and community support, AVSC moved into its new home at the base of Five Trees.

The Club was awarded the Colorado Ski Hall of Fame’s ‘Top of the Hill’ award for its outreach efforts and earned USSA’s Club of the Year award.

AVSC is the largest ski club in the nation, serving over 2,400 kids, from Aspen to Rifle, across year-round competitive and recreational programs.

Well-Rounded Programming for Well-Rounded Athletes SHIFTING TOWARDS YEAR-ROUND PROGRAMMING As of summer 2019, we’ve made clear distinctions between year-round and winter programs in each discipline. This is a change that we’ve been moving towards for a few years now in order to give all athletes the best experience possible. While the commitment level and training schedule varies between year-round and winter programs, the ethos of the programs remains the same: emphasis on developing a passion for sport, making technical and tactical progress towards each athlete’s goals, building relationships with teammates and mentors, and becoming a part of our unique mountain culture. SUMMER PROGRAMS You can find AVSC athletes all over the Roaring Fork Valley in the summer – practicing their tricks on the trampolines and at Buttermilk Glacier, building cardiovascular strength on mountain biking and hiking trails, developing strength in the gym, and more. Furthermore, many travel far afield in search of snow and training opportunities – this summer brought trips to Norway and Bend, OR to name a few! ACADEMICS AT AVSC Research shows that youth who develop the work ethic, physical condition, and mental stamina necessary to compete in sports cultivate the skills necessary to lead a life of purpose. We want to reimagine the use of time so that student-athletes can earn credit for graduation outside of traditional school hours.  We leverage offerings at our local high schools, Colorado Mountain College, and online learning opportunities to complete some courses over the summer, in the evening during the fall/spring, or through guided online classes.  This allows student-athletes to increase their time on snow and decrease their academic load during the competitive season.

ATHLETIC TRAINING We are excited to add a full-time Athletic Trainer to our staff. This role, made possible by Aspen Valley Hospital (AVH), is new to AVSC. The Athletic Trainer will support AVSC’s competitive programs: to bolster strength during conditioning and prevent injury, to ensure proper treatment, and to create effective return-to-sport pathways post-injury. Based out of the AVSC Clubhouse, our Athletic Trainer will work with athletes on the hill locally as well as on the road during competition season.

AVSC’s Andy Mill Award Winner for the 2019 season! The Andy Mill Award is AVSC’s highest honor, awarded for athletic achievement. Oldham earned all-American honors this winter, was named to the U18 national team for the Scando Cup in Estonia, and dominated on the Rocky Mountain Nordic circuit, among other accomplishments. Congratulations, Kate! ANNUAL REPORT | 2019

Thank you for your generous support: Lifetime Giving

Thank you for your generous support: Restricted Giving

Karim (left) with his dad, Charif, at AVSC’s Celebration of Bob Beattie, December 2018

Driving through our valley one is struck by the incredible landscape. Whether your preference is skiing, snowboarding, or mountain biking, we naturally have some of the best venues in the world basically in our backyard. It’s in the DNA of our communities and it makes our valley a truly special place. But access isn’t guaranteed. We still have many children who don’t believe they will ever be able to afford to participate in activities that many of us take for granted. We at AVSC believe that it is critical to the social fabric of our community to make sure we don’t limit participation to those who can afford the price tag. We strive to provide access to an inclusive environment where every youth in our community has the opportunity to participate, to thrive and to excel! - KARIM SOUKI, AVSC CO-PRESIDENT

Thank you for your generous support: Bob Beattie Endowment

Have you ever felt if you didn’t have something, you wouldn’t be who you are without it? Well, that’s exactly how I feel about the AVSC program. - 12 YEAR OLD SCHOLARSHIP RECIPIENT

Thank you for your generous support: Sponsors

AVSC would like to thank Aspen Skiing Company for their generosity and support of AVSC athletes and our community.

To live in this beautiful valley and not have the same opportunity as others to participate in AVSC winter and summer programs is simply not right. We want to ensure that all kids can have the choice to be a part of AVSC.   - JACOLYN AND JOHN BUCKSBAUM, AVSC SUPPORTERS

Jacolyn and John (center) with their sons and Ajax Cup team members at the 2018 Audi Ajax Cup.