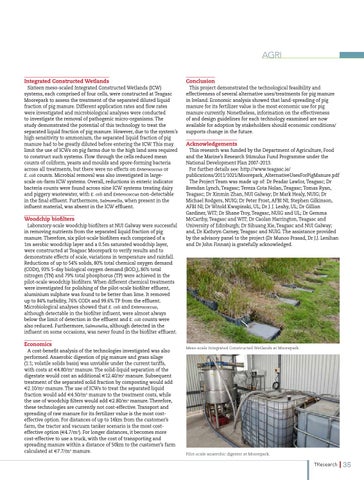 Sixteen meso-scaled Integrated Constructed Wetlands (ICW) systems, each comprised of four cells, were constructed at Teagasc Moorepark to assess the treatment of the separated diluted liquid fraction of pig manure. Different application rates and flow rates were investigated and microbiological analyses were conducted to investigate the removal of pathogenic micro-organisms. The study demonstrated the potential of this technology to treat the separated liquid fraction of pig manure. However, due to the system’s high sensitivity to ammonium, the separated liquid fraction of pig manure had to be greatly diluted before entering the ICW. This may limit the use of ICWs on pig farms due to the high land area required to construct such systems. Flow through the cells reduced mean counts of coliform, yeasts and moulds and spore-forming bacteria across all treatments, but there were no effects on Enterococcus or E. coli counts. Microbial removal was also investigated in largescale on-farm ICW systems. Overall, reductions in enteric indicator bacteria counts were found across nine ICW systems treating dairy and piggery wastewater, with E. coli and Enterococcus non-detectable in the final effluent. Furthermore, Salmonella, when present in the influent material, was absent in the ICW effluent.

This project demonstrated the technological feasibility and effectiveness of several alternative uses/treatments for pig manure in Ireland. Economic analysis showed that land-spreading of pig manure for its fertilizer value is the most economic use for pig manure currently. Nonetheless, information on the effectiveness of and design guidelines for each technology examined are now available for adoption by stakeholders should economic conditions/ supports change in the future.

Woodchip biofilters Laboratory-scale woodchip biofilters at NUI Galway were successful in removing nutrients from the separated liquid fraction of pig manure. Therefore, six pilot-scale biofilters each comprised of a 1m aerobic woodchip layer and a 0.5m saturated woodchip layer, were constructed at Teagasc Moorepark to verify results and to demonstrate effects of scale, variations in temperature and rainfall. Reductions of up to 54% solids, 80% total chemical oxygen demand (CODt), 93% 5-day biological oxygen demand (BOD5), 86% total nitrogen (TN) and 79% total phosphorus (TP) were achieved in the pilot-scale woodchip biofilters. When different chemical treatments were investigated for polishing of the pilot-scale biofilter effluent, aluminium sulphate was found to be better than lime. It removed up to 84% turbidity, 76% CODt and 99.6% TP from the effluent. Microbiological analyses showed that E. coli and Enterococcus, although detectable in the biofilter influent, were almost always below the limit of detection in the effluent and E. coli counts were also reduced. Furthermore, Salmonella, although detected in the influent on some occasions, was never found in the biofilter effluent.

Economics A cost-benefit analysis of the technologies investigated was also performed. Anaerobic digestion of pig manure and grass silage (1:1; volatile solids basis) was unviable under the current tariffs, with costs at €4.80/m3 manure. The solid-liquid separation of the digestate would cost an additional €12.40/m3 manure. Subsequent treatment of the separated solid fraction by composting would add €2.10/m3 manure. The use of ICWs to treat the separated liquid fraction would add €4.50/m3 manure to the treatment costs, while the use of woodchip filters would add €2.80/m3 manure. Therefore, these technologies are currently not cost-effective. Transport and spreading of raw manure for its fertilizer value is the most costeffective option. For distances of up to 14km from the customer’s farm, the tractor and vacuum tanker scenario is the most costeffective option (€4.7/m3). For longer distances, it becomes more cost-effective to use a truck, with the cost of transporting and spreading manure within a distance of 50km to the customer’s farm calculated at €7.7/m3 manure. 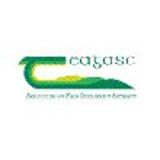