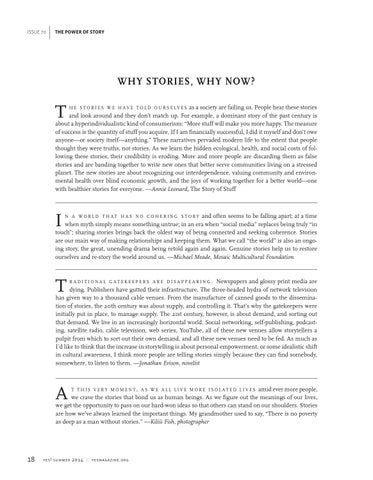 THE POWER OF STORY

WHY STORIES, WHY NOW?

as a society are failing us. People hear these stories and look around and they don’t match up. For example, a dominant story of the past century is about a hyperindividualistic kind of consumerism: “More stuff will make you more happy. The measure of success is the quantity of stuff you acquire. If I am financially successful, I did it myself and don’t owe anyone—or society itself—anything.” These narratives pervaded modern life to the extent that people thought they were truths, not stories. As we learn the hidden ecological, health, and social costs of following these stories, their credibility is eroding. More and more people are discarding them as false stories and are banding together to write new ones that better serve communities living on a stressed planet. The new stories are about recognizing our interdependence, valuing community and environmental health over blind economic growth, and the joys of working together for a better world—one with healthier stories for everyone. —Annie Leonard, The Story of Stuff

and often seems to be falling apart; at a time when myth simply means something untrue; in an era when “social media” replaces being truly “in touch”; sharing stories brings back the oldest way of being connected and seeking coherence. Stories are our main way of making relationships and keeping them. What we call “the world” is also an ongoing story, the great, unending drama being retold again and again. Genuine stories help us to restore ourselves and re-story the world around us. —Michael Meade, Mosaic Multicultural Foundation n a w o r l d t h at h a s n o c o h e r i n g s t o r y

Newspapers and glossy print media are dying. Publishers have gutted their infrastructure. The three-headed hydra of network television has given way to a thousand cable venues. From the manufacture of canned goods to the dissemination of stories, the 20th century was about supply, and controlling it. That’s why the gatekeepers were initially put in place, to manage supply. The 21st century, however, is about demand, and sorting out that demand. We live in an increasingly horizontal world. Social networking, self-publishing, podcasting, satellite radio, cable television, web series, YouTube, all of these new venues allow storytellers a pulpit from which to sort out their own demand, and all these new venues need to be fed. As much as I’d like to think that the increase in storytelling is about personal empowerment, or some idealistic shift in cultural awareness, I think more people are telling stories simply because they can find somebody, somewhere, to listen to them. —Jonathan Evison, novelist

amid ever more people, we crave the stories that bond us as human beings. As we figure out the meanings of our lives, we get the opportunity to pass on our hard-won ideas so that others can stand on our shoulders. Stories are how we’ve always learned the important things. My grandmother used to say, “There is no poverty as deep as a man without stories.” —Kiliii Fish, photographer 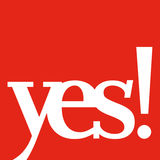