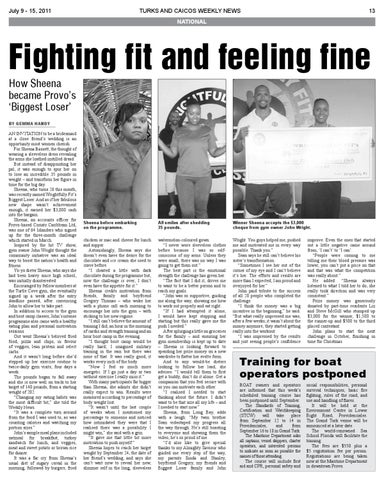 Fighting fit and feeling fine How Sheena became Provo’s ‘Biggest Loser’ By Gemma Handy AN INVITATION to be a bridesmaid at a close friend’s wedding is an opportunity most women cherish. For Sheena Bassett, the thought of wearing a sleeveless dress revealing the arms she loathed instilled dread. But instead of disappointing her pal, it was enough to spur her on to lose an incredible 35 pounds in weight – and transform her figure in time for the big day. Sheena, who turns 26 this month, was recently named Wrightfully Fit’s Biggest Loser. And as if her fabulous new shape wasn’t achievement enough, it earned her $3,000 cash into the bargain. Sheena, an accounts officer for Provo-based Coriats Caribbean Ltd, was one of 64 Islanders who signed up for the three-month challenge which started in March. Inspired by the hit TV show, gym owner John Wright thought the community initiative was an ideal way to boost the nation’s health and fitness. Yo-yo dieter Sheena, who says she had been heavy since high school, was initially disinterested. Encouraged by fellow members at the Turtle Cove gym, she eventually signed up a week after the entry deadline passed, after convincing John to allow her to take part. In addition to access to the gym and boot camp classes, John’s intense programme also came with a healthy eating plan and personal motivation sessions. Out went Sheena’s beloved fried food, pizza and chips, in favour of veggies, lean protein and select carbs. And it wasn’t long before she’d stepped up her exercise routine to twice-daily gym visits, four days a week. The pounds began to fall away and she is now well on track to her target of 140 pounds, from a starting weight of 202. “Changing my eating habits was the most difficult bit,” she told the Weekly News. “It was a complete turn around from the food I was used to, as was counting calories and watching my portion sizes.” John’s sample meal plans included oatmeal for breakfast, turkey sandwich for lunch, and veggies, meat and sweet potato or brown rice for dinner. It was a far cry from Sheena’s usual diet of sugary cereal in the morning, followed by burgers, fried

Sheena before embarking on the programme.

All smiles after shedding 35 pounds.

chicken or mac and cheese for lunch and supper. Astonishingly, Sheena says she doesn’t even have the desire for the chocolate and ice cream she used to crave before. “I cheated a little with dark chocolate during the programme but, now the challenge is over, I don’t even have the appetite for it.” Sheena credits motivation from friends, family and boyfriend Gregory Thomas – who woke her with a phone call each morning to encourage her into the gym – with sticking to her new regime. “I still can’t believe the amount of training I did; an hour in the morning of cardio and strength training and an hour boot camp in the evening. “I thought boot camp would be really hard; I imagined military training in the rain but there was none of that. It was really good, it works every inch of the body. “Now I feel so much more energetic. If I go just a day or two without exercise I really miss it.” With many participants far bigger than Sheena, she admits she didn’t really expect to win. Results were measured according to percentage of body weight lost. “It wasn’t until the last couple of weeks when I mentioned my percentage to someone and noticed how intimidated they were that I realised there was a possibility I might win,” she said with a grin. “It gave me that little bit more motivation to push myself.” Sheena hopes to reach her target weight by September 24, the date of her friend’s wedding, and says she can’t wait now to reveal her new, slimmer self in the long, sleeveless

watermelon-coloured gown. “I never wore sleeveless clothes before because I was so selfconscious of my arms. Unless they were small, there was no way I was going to get them out.” The best part is the emotional strength the challenge has given her. “The fact that I did it, drives me to want to be a better person and to reach my goals. “John was so supportive, guiding me along the way, showing me how to work out properly and eat right. “If I had attempted it alone, I would have kept stopping and starting but this really gave me the push I needed.” After splurging a little on groceries for the family – and ensuring her gym membership is kept up to date – Sheena is looking forward to spending her prize money on a new wardrobe to flatter her svelte form. And to any would-be dieters looking to follow her lead, she advises: “I would tell them to first get a buddy, don’t do it alone. Get a companion that you feel secure with so you can motivate each other. “I realised I needed to start thinking about the future. I didn’t want to be that size all my life – and I needed to start now.” Sheena, from Long Bay, adds with a laugh: “My twin brother Sean videotaped my progress all the way through. He’s still boasting to everyone and showing them the video, he’s so proud of me. “I’d also like to give special thanks to my Almighty Saviour who guided  me every step of the way, my  parents Ilinda and Stanley, boyfriend Gregory, my friends and Biggest Loser family and John

Wright. You guys helped me, pushed me and motivated me in every way possible. Thank you.” Sean says he still can’t believe his sister’s transformation. “Sometimes I see her out of the corner of my eye and I can’t believe it’s her. The efforts and results are more than I expected; I am proud and overjoyed for her.” John paid tribute to the success of all 28 people who completed the challenge. “I think the money was a big incentive in the beginning,” he said. “But what really impressed me was, after a few weeks, it wasn’t about the money anymore, they started getting really into the workout. “I was impressed by the results and just seeing people’s confidence

improve. Even the ones that started out a little negative came around from, ‘I can’t’ to ‘I can’. “People were coming to me telling me their blood pressure was lower; you can’t put a price on that and that was what the competition was really about.” He added: “Sheena always listened to what I told her to do, she really took direction and was very consistent.” Prize money was generously donated by part-time residents Liz and Steve McGill who stumped up $3,000 for the winner, $1,500 to the runner-up and $500 to the third placed contestant. John plans to start the next challenge in October, finishing in time for Christmas.

Training for boat operators postponed BOAT owners and operators are informed that this week’s scheduled training course has been postponed until September. The Standards of Training, Certification and Watchkeeping (STCW) will take place from September 12 to 14 in Providenciales, and from September 16 to 18 in Grand Turk. The Maritime Department asks all captains, vessel skippers, charter operators, and interested persons to indicate as soon as possible the names of those attending. The course will include first aid and CPR, personal safety and

social responsibilities, personal survival techniques, basic fire fighting, rules of the road, and use and handling of flares. It will be held at the Environment Centre in Lower Bight Road, Providenciales. The Grand Turk venue will be announced at a later date. The world-renowned Sea School Florida will facilitate the training. The fees are $550 plus a $5 registration fee per person. Registrations are being taken now at the Maritime Department in downtown Provo.