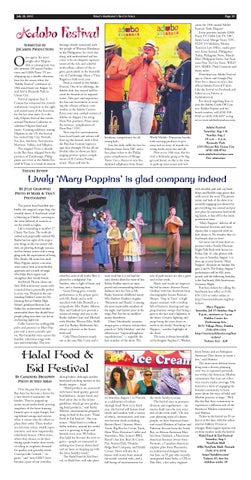 nce again, the most sought-after Filipino dish is coming your way this summer. JSCamins Productions and GMA Pinoy TV are whipping-up a double whammy feast for the senses when the “Adobo Festival” celebrates its 10th anniversary on August 1st and 2nd at Kennedy Park in Union City. Festival organizer Joey S. Camins has witnessed the crowd’s enthusiastic reception to the sight and sound treats of the festivities for the last nine years. It is the only Filipino festival that travels around Northern California to celebrate Filipino food and music. Creating solidarity among Filipinos in the US, the festival has visited Daly City, Newark, San Jose, Stockton, Sacramento, Martinez, Vallejo, and Milpitas. The original Vinta is already in the Bay Area, shipped from the province of Zamboanga, Philippines; see it live at the Adobo Festival! A Vinta is a vessel of ancient

heritage closely associated with the people of Western Mindanao in the Philippines. Its vivid, dazzling, and multicolored sail has come to be an eloquent representation of the rich and colorful multi-ethnic culture of the region, particularly in the beautiful city of Zamboanga where a Vinta Regatta is held every year. Food is central to the Adobo Festival. One of its offerings, the Adobo dish, has moved well beyond the bounds of its regional status. Take part and experience the fun and excitement in savoring this vibrant culinary commodity at the Adobo Contest. Enter your own cooked version of Adobo on August 2 by using Datu Puti products. Prizes await the winners, compliments of Datu Puti / UFC. Non-stop live entertainment from local bands and talents will liven up the festival, with a Kiddie Pop Star Contest (open to ages four through 10) for all our lovable tykes to showcase their singing prowess (prizes compliments of JS Camins Productions). There will also be

kendama competitions for all young kids. Join the daily raffle for free balikbayan boxes from LBC and a free plane ticket to the Philippines compliments of Mango Tours. Get a chance to win free Android cellphones from Smart

World Mobile. Numerous booths with exciting products to give away and an array of mouth-watering foods await one and all. Now on its 10th year, this festival is definitely going to be bigger and better, so this is the time to perk-up your senses and wel-

BY JULIE GRABOWSKI PHOTO BY MARK &amp; TRACY PHOTOGRAPHY The parrot head handled umbrella, the magical carpet bag, the sensible shoes. A StarStruck wind is blowing in Dublin, carrying in the most beloved of nannies to set the world to rights. Life is unraveling at number 17 Cherry Tree Lane. The work-absorbed and perpetually ordered Mr. Banks has lost sight of the important things in life, his unruly children are plowing through nannies, and his former actress wife is struggling with the expectations of being Mrs. Banks. All seems lost until Mary Poppins arrives, a no-nonsense nanny with an unorthodox approach and a touch of magic who helps them regain and strengthen their family bonds. StarStruck Theatre closes out their 20th anniversary season with a musical that is practically perfect in every way. Housed in the outstanding Dublin Center for Performing Arts at Dublin High School, producer/director Lori Stokes has orchestrated another memorable show that should have people piling into their cars for an enchanting night out. Callie Garrett has unflappable poise and presence as Mary Poppins and is most certainly spot on. Her beautiful voice carries the familiar, infectious songs with ease and ownership. The ever-

BY CASSANDRA BROADWIN PHOTO BY SYED ABBAS Over the past few years the Bay Area has become a haven for a new breed of consumer: the foodies. They’ve popped up across social media feeds, posting snapshots of the latest buzzing brunch spot or super burger, leaving behind ratings and reviews when it comes time for others to place their order. These foodies are real-time critics, widely representative, and most importantly, relentlessly honest. Often times, where they choose to do their dining speaks louder than words, revealing an emphatic demand for quality and specialty meals. Concepts like “natural,” “organic,” and “non-GMO” have become a part of our everyday

cheerful, jack-of-all-trades Bert is played by a delightful Tim Sanders, who is light of heart and feet, and a charming host. Grant Ewing gives a sturdy performance as the proper patriarch Mr. Banks and is wellmatched with Julia Brunelli as a sympathetic Mrs. Banks. Allayna Slate and Gabriel Lew provide a stream of energy and sass as the Banks children Jane and Michael, with Heather Warren (Mrs. Brill) and Zac Richey (Robertson Ay) always a pleasure as the household staff. Carly Tilson-Lumetta stands out as the zany Mrs. Corry and is

dining habits, although another buzzword catching interest in the foodie empire… halal. “Halal products are associated with better food quality, general healthfulness, cleaner foods and food safety due to the stricter guidelines which go into producing halal products,” said Aysha Mohsin, entertainment programming co-lead of this year’s “Halal Food &amp; Eid Festival.” She continues, “Halal food is a trillion dollar industry around the world, and it is growing in leaps and bounds every year. We believe that halal has become the new organic—people are interested in making wise choices about food and are keen on keeping up with the latest healthy trend.” The Halal Food &amp; Eid Festival, or Halal Fest, will take place

such vivid fun it is too bad the story doesn’t allow for more of her. Kelsey Findlay injects an unexpected and commanding delicious darkness into Act Two as Mr. Banks’ fearsome childhood nanny Miss Andrew. Findlay’s singular “Brimstone and Treacle” is among the most memorable numbers of the night, and Garrett joins in the song’s Part Two for an excellent nanny showdown. Diane Scherbarth’s costume design gives a vibrant, technicolor punch in “Jolly Holiday” and the effervescent “Supercalifragilisticexpialidocious” — arguably the best number of the show. The

on Saturday, August 1 in Newark as a celebration of culture through food! Now in its third year, the festival will feature food trucks and vendors with a variety of ethnic, international, and summer-favorite foods including Biryani Bowl, Chutney Mary’s Truck, Big Bite Ice Cream Truck, Maui Wowi Hawaiian Coffee and Smoothies, Miss Louise’s BBQ, Raoof ’s San Jose Bean &amp; Carrot Pies, Sunrise Deli, Thunder Ridge Beef Company, and Falafel Corner. There will also be a bazaar with items from around the world, carnival rides, and a full lineup of entertainment for

trio of park statues are also a great nod to her work. Music and vocals are impeccably led by music director Nancy Godfrey with fine footwork from choreographer Jeanne BatacanHarper. “Step in Time” is highimpact moment with a rooftop full of fantastic dancing and tapping chimney sweeps that bring a grin to the face and a lightness to the heart. Creative lighting and props bring the stars closer to earth in the lovely “Anything Can Happen,” another highlight of the show. The scene is always beautifully set by designer Stephen C. Wathen

with detailed park and city backdrops and flexible stage pieces that settle you in the story. The presentation and look of the show is so naturally engaging you almost forget everything was created and put into place by numerous hard-working hands, so hats off to the entire production team. “Mary Poppins” delivers all of the musical favorites and story charm that is expected with no buts about it. No wonder that it’s StarStruck that we love! Get more out of your show experience with a Family Discount Night/Talk Back with Actors on Friday, July 31; take photos with the cast on Saturday, August 1 or dress up as your favorite “Mary Poppins” character on Sunday, August 2 and 9. The Friday, August 7 performance will be ASL interpreted, and the following Saturday is the StarStruck 20th Anniversary Giveaway Night. Purchase tickets by calling the StarStruck box office at (510) 659-1319 or order online at http://starstrucktheatre.org/buytickets/. Mary Poppins Saturday, Jul 25-Sunday, Aug 9 8 p.m., matinees at 3 p.m. Dublin Center for Performing Arts 8151 Village Pkwy, Dublin (510) 659-1319 http://starstrucktheatre.org/buy -tickets/ Tickets: $22 - $28

the entire family to enjoy. The festival aims to promote diversity and togetherness – initiatives built into the very structure of the event itself. “On our core planning team of a dozen people, we have American bornand-raised Muslims of Indian and Pakistani descent from the South Bay, an African-American Muslim from Oakland, a PalestinianAmerican business owner from Fremont, a Canadian-American airplane pilot from Pleasanton, an architectural designer from San Jose, an IT guy who recently immigrated from India, a CPA in Palo Alto, a fire safety engineer

from Fresno and an EthiopianAmerican Uber driver, to name a few,” said Mohsin. The motivation behind assembling such a diverse planning crew was to represent personalities within the American Muslim community that may not otherwise receive media coverage. The festival is a form of engaging the broader community to learn more about the ways of halal and Muslim practice at large. “We’d like the Bay Area community to experience a different side of the American Muslim community,” said Mohsin. Tickets to the festival are $5 online or at the door, with free admission for children 10 years or younger. Rides require separate tickets from vendors inside the festival. Halal Food &amp; Eid Festival Saturday, Aug 1 NewPark Mall 2086 NewPark Mall, Newark (510) 974-3378 http://halalfest.com/ Tickets: $5, free for children under 10