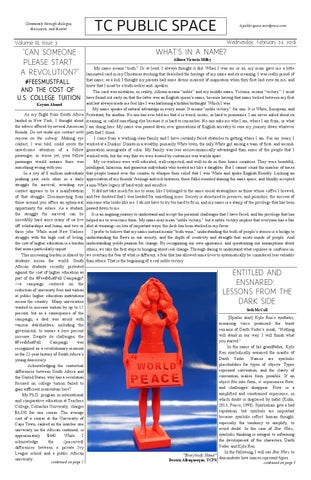 Community through dialogue, discussion, and dissent.

"CAN SOMEONE PLEASE START A REVOLUTION?" #FEESMUSTFALL AND THE COST OF U.S. COLLEGE TUITION Kayum Ahmed

As my flight from South Africa landed in New York, I thought about the advice offered by several American friends: Do not make eye contact with anyone on the subway. Making eye contact, I was told, could invite the unwelcome attention of a fellow passenger, or worse yet, your fellow passenger would assume there was something wrong with you. In a city of 8 million individuals pushing past each other in a daily struggle for survival, avoiding eye contact appears to be a manifestation of that struggle. Disconnecting from those around you offers an ephemeral opportunity for solace. As a student, the struggle for survival can be incredibly hard since many of us live off scholarships and loans, and two or three jobs. While most New Yorkers struggle with the high cost of living, the cost of higher education is a burden that seems particularly unjust. This increasing burden is shared by students across the world. South African students recently protested against the cost of higher education as part of the #FeesMustFall Campaign* —a campaign centered on the reduction of university fees and tuition at public higher education institutions across the country. Many universities wanted to increase tuition by up to 15 percent, but as a consequence of the campaign, a deal was struck with various stakeholders, including the government, to ensure a zero percent increase. Despite its challenges, the #FeesMustFall Campaign was recognized as a revolutionary moment in the 22-year history of South Africa’s young democracy. Acknowledging the contextual differences between South Africa and the United States, why has a revolution focused on college tuition failed to gain sufficient momentum here? My Ph.D. program in international and comparative education at Teachers College, Columbia University, charges $4,350 for one course. The average cost of a course at the University of Cape Town, ranked as the number one university on the African continent, is approximately $440. While I acknowledge the (perceived) differences between a private Ivy League school and a public African university... continued on page 2

My name means “truth.” Or at least, I always thought it did. When I was six or so, my mom gave me a little laminated card in my Christmas stocking that described the heritage of my name and its meaning. I was really proud of that name; as a kid, I thought my parents had some divine moment of inspiration when they first laid eyes on me, and knew that I must be a truth-seeker and -speaker. The card was mistaken; in reality, Allison means “noble” and my middle name, Victoria, means “victory.” I must have found out early on that the latter was an English queen’s name, because having that name tucked between my first and last always made me feel like I was harboring a hidden birthright. Which I was. My name speaks of natural advantage in every sense. It means “noble victory,” for one. It is White, European, and Protestant, for another. No one has ever told me that it is weird, exotic, or hard to pronounce. I am never asked about its meaning, or called something else because it is hard to remember. No one asks me who I am, where I am from, or what I am doing here. My name was passed down over generations of English ancestry to ease my journey down whatever path that I chose. I come from a working-class family and I have certainly faced obstacles to getting where I am. For six years, I worked at a Dunkin’ Donuts in a wealthy, primarily White town, the only White girl among a team of first- and secondgeneration immigrants of color. My family was less socioeconomically advantaged than some of the people that I worked with, but the way that we were treated by customers was worlds apart. My co-workers were well-educated, well-respected, and well-to-do in their home countries. They were beautiful, intelligent, hilarious, and generous individuals who treated me like a daughter. But I cannot count the number of times that people leaned over the counter to whisper their relief that I was White and spoke English fluently. Lacking an appreciation of my friends’ feelings and rich histories, these folks resented sharing the same space, and blindly accepted a non-White legacy of hard work and sacrifice. It did not take much for me to seem like I belonged to the same social stratosphere as those whose coffee I brewed, and few doubted that I was headed for something more. Society is structured to preserve, and prioritize, the success of someone who looks like me. I do not have to try too hard to fit in, and my name is a stamp of the privilege that has been passed down to me. It is an ongoing journey to understand and accept the personal challenges that I have faced, and the privilege that has helped me to overcome them. My name may mean “noble victory,” but a noble victory implies that everyone has a fair shot at winning—in lots of important ways, the deck has been stacked in my favor. I prefer to believe that my name instead means “truth wins;” understanding the truth of people’s stories is a bridge to understanding the flaws in our society, and the depth of creativity and strength that exists inside of people. And understanding yields passion for change. By recognizing our own ignorance, and questioning our assumptions about others, we take the first steps to bringing about real change. Through daring to understand what repulses or confuses us, we overturn the fear of what is different, a fear that has allowed some lives to systematically be considered less valuable than others. That is the beginning of a real noble victory.

ENTITLED AND ENSNARED: LESSONS FROM THE DARK SIDE Seth McCall

[Spoiler alert] Kylo Ren’s synthetic, menacing voice promised the burnt remains of Darth Vader’s mask, “Nothing will stand in our way. I will finish what you started.” In the name of his grandfather, Kylo Ren symbolically assumed the mantle of Darth Vader. Names are symbolic placeholders for types of objects. Types represent convention, and the clarity of convention makes form possible. If an object fits into form, it experiences flow, and challenges disappear. Flow is a simplified and constrained experience, in which doubt is displaced by habit (Kohn, 2013; Peirce, 1998). Symbolism gets a bad reputation, but symbols are important because symbols reflect human thought, especially the tendency to simplify, to avoid doubt. In the case of Star Wars, symbolic thinking is integral to informing the development of the characters, Darth Vader and Kylo Ren. In the following, I will use Star Wars to "Everybody Name" demonstrate how names represent types... 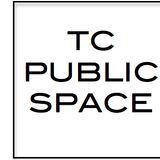 Articles in this issue: 1. "Can Someone Please Start A Revolution? #FeesMustFall and the Cost of U.S. College Tuition," Kayum Ahmed 2. "What...

Articles in this issue: 1. "Can Someone Please Start A Revolution? #FeesMustFall and the Cost of U.S. College Tuition," Kayum Ahmed 2. "What...